Tis the Season: How Fasting Prepares Us for Feasting - Seedbed
close
Menu 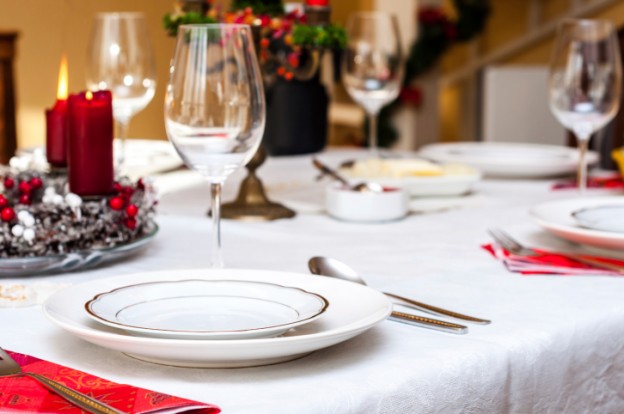 ‘Tis the season! Christmas songs are playing continuously on the radio. Department stores have donned their silver and gold, red and green. Lights have been strung on houses. Christmas lists are being written. Plans to gather with family and friends are being put on the calendar.

‘Tis the season. Ready or not, we have been thrust into it.

There is a song played this time of year that seems to capture the urgency felt as Christmas approaches. The final line of the chorus to this song says: “Oh, we need a little Christmas, right this very minute… we need a little Christmas now.” Yes, there is certainly great excitement in our culture as Christmas approaches. It’s the season to be jolly and joyous. To be anything contrary runs the risk of coming across as a mean ol’ Scrooge.

As stimulating and happy as this time can be, it can also be exhausting. For many of us, there is a feeling that we continue to enter the Christmas season more and more prematurely. Historically in the Church, this Christmas pre-season was not a time to “get a little Christmas now”; rather, it was a season of simplicity and waiting, of preparation and discipline.

Those in the Church who are familiar with the liturgical calendar are likely familiar with this Christmas pre-season time called Advent. Advent is a unique season as it prepares and awaits for the celebration of Christ’s coming in Christmas by simultaneously remembering the incarnation of Christ at His birth while anticipating His second coming Christ. Advent is the experience of hope and expectancy as the season points to the promised Messiah who will bring an end to all things contrary to the ways of God. In Advent, the Church “makes ready” the Kingdom of God by confronting the world in light of the incarnation and second coming, awaiting the final destruction of the powers of evil when God’s justice and righteousness will reign and God’s shalom will consume all things.

Preparation and waiting are not obvious values of a culture that tends to sing, “We need a little Christmas now.” The intention of this song is undoubtedly not focused on heightening the anticipation of Christ’s ultimate rule. Rather, the sense of these lyrics point toward restlessness and urgency, a lack of discipline in our culture to simplify our lives and to wait. As a result, we see that the season of Advent continues to be more and more defined by qualities of commercialism and consumerism.

In his book, Being Consumed, William Cavanaugh observes that what characterizes a consumer culture is not attachment but detachment. We do not hoard money; we spend it. We do not cling to things; we discard them to buy other things, often the newer version of what we already own. As Cavanaugh writes, “Consumers are categorized by a constant dissatisfaction with material goods. This dissatisfaction is what produces the restless pursuit of satisfaction in something new.” This disposition is known as consumption.

Consumption is an important subject to address in Advent because for the Church, consumption is a spiritual characteristic—a way of looking at and interacting with the world. Want and acquisition are principle motivators of consumption, cultivating restlessness and urgency for the consumer. We see this constantly in the culture around us. The world is focused on the temporal. Our desires are constantly being wooed by the hi-def television, the latest phone, the upgraded computer, that new pair of shoes, a new watch, etc. When these things cease to satisfy, we toss them for something new. When something is cut free from its chief end, consumption is done simply for the sake of consuming. This is an enslavement of the soul as desire increases to continually consume with no idea why. Desire itself becomes our only value.

For the early desert monastic orders, the habit of uncontrolled consumption was known as gluttony. They held gluttony as the gateway to all sin. Take the first sin of Adam and Eve as an example—Adam and Eve’s failure to control their desire to eat of the forbidden fruit resulted in sin entering the world. In this same manner, uncontrolled consumption in our lives opens a spiritual doorway for sin to enter. To combat such sin, the early desert monastics believed the gateway to all virtue was the practice of self-discipline through fasting, an act directly opposite of consumption. Through fasting, a spiritual doorway is opened to abstinence and self-denial. As the soul is purified through prayer and fasting, it draws nearer to God through honest commitment and good behavior.

Another important practice in the ancient Church was the act of almsgiving—caring for the poor and needy. Leaders such as Augustine of Hippo preached that true desire for God manifests itself in charity for neighbor. The call throughout the scriptures is continuous to care for the widow, the alien, and the orphan. Furthermore, Christ explicitly says to feed the hungry, clothe the naked, and visit the imprisoned. The self-interest of consumption does not seek such charity for neighbor. A consumerist mentality creates competition between others’ desires and one’s own. Yet, active participants of God’s Kingdom find their desires being formed toward battling injustice and enacting God’s righteousness in the world. Competition becomes charity.

Historically, fasting and almsgiving have been standard practices during the Christmas pre-season of Advent. In contrast to a culture of acquisition and pursuit of the new, these practices remind the Church that we are the ones being consumed in the newness of life that only Christ brings. Through fasting and charity, we prepare for the feast as we are formed into reflections of the Christmas glory—the self-giving love of God.

The beauty of the Church’s liturgical calendar is that it sets a pattern in life of fasting and feasting. The world instills an urgency to “need a little Christmas now.” It is much more comfortable to bypass the fast and jump right into the feast. We easily make excuses for the things we want and enjoy in life. Seldom, if ever, do we make excuses for practicing simplicity and waiting. But the fast prepares us for the feast. Abstinence brings joy to consummation.

Thus, in the midst of a season that thrusts us into Christmas through the music, parties, shopping, and baking, we must ask ourselves how will we be intentional about making Advent a time of simplicity? What can we do as we await the celebration of the great feast of Christmas? Perhaps we set apart a day to fast. Take one day in the season to refrain from consuming. Maybe even make it a weekly practice. Another consideration—seek out tangible ways for simplicity to become generosity. Who are those around us in need and what are their needs? What can we sacrifice to provide for others?