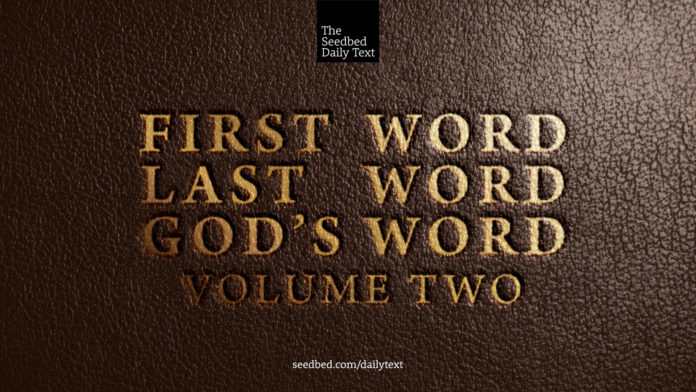 3 The boy Samuel ministered before the Lord under Eli. In those days the word of the Lord was rare; there were not many visions.

2 One night Eli, whose eyes were becoming so weak that he could barely see, was lying down in his usual place. 3 The lamp of God had not yet gone out, and Samuel was lying down in the house of the Lord, where the ark of God was. 4 Then the Lord called Samuel.

But Eli said, “I did not call; go back and lie down.” So he went and lay down.

6 Again the Lord called, “Samuel!” And Samuel got up and went to Eli and said, “Here I am; you called me.”

7 Now Samuel did not yet know the Lord: The word of the Lord had not yet been revealed to him.

People often ask me, “How on earth do you come up with something new for the daily text every single day?” My answer is, I don’t. Seriously, I don’t come up with anything. I ask Jesus to give me something. I ask him to reveal himself and his word to me. Then I wait. And I trust what comes. It comes not in the form of an idea I come up with. It comes in the form of sensing the gravitational pull of one or another of his words. Today it was 1 Samuel 3:7.

7 Now Samuel did not yet know the Lord: The word of the Lord had not yet been revealed to him.

Here’s what’s interesting to me about this text.

The boy Samuel ministered before the Lord under Eli. . . Samuel was lying down in the house of the Lord, where the ark of God was.

Samuel was surrounded by the things of God and yet he did not know God.

He slept in the house of the Lord, in the very room which held the Ark of the Covenant. Samuel was in the very presence of God but did not know it. He knew about God, but he did not know God. In other words, he was asleep to the very reality in which he lived.

This is the big problem with slumber. You don’t know it when you are sleeping. You don’t know you were asleep until you wake up. It’s often the question of a person who wakes up after being in deep sleep? “How long was I asleep?”

In other words, I don’t know what I don’t know. Here’s how I put it. The greatest impediment to my own awakening is the fact that I’m pretty sure I am already awake. I remind myself that Jesus knows me completely yet I know him in part and the part of him I don’t know is far greater than the part I do know. I want to know him fully, even as I am fully known. So I humble myself and I tell him this. And I realize that the further I go in building my knowledge about God and surrounding myself with the things of God can actually deceive me into thinking I have already arrived.

And though I have written thousands of Daily Text entries by now, every day I begin at the beginning again; lining up at the starting line, waiting on the Lord and the revelation of his Word, pressing in to know him more, humbling myself in his presence, and by pure grace, waking up a bit more to his more-ness, his fullness, and his more than enough-ness. And here’s what I find. As I lay my self-assured assumptions on the altar, he meets me there with Holy Spirit inspired assurances.

This is what I call the awakened life.*

We are about to launch another cohort of The Awakened Life Course. Dan Wilt will be at the helm. I’ll be helping to lead it, and we will be bringing some All Star Saints to teach and encourage. It begins February 8 and runs four weeks (four Monday nights plus loads of bonus materials). COME ON! Register here. Scholarships available upon request.