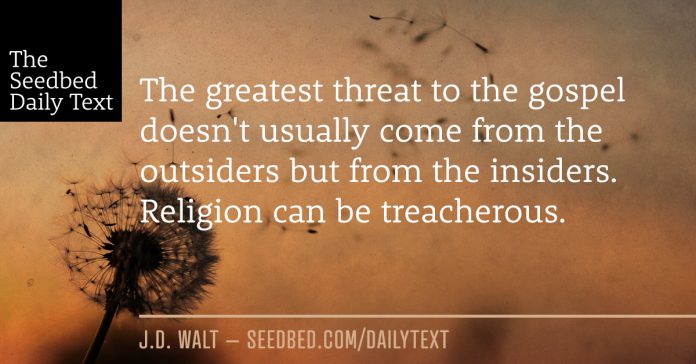 The next day Paul took the men and purified himself along with them. Then he went to the temple to give notice of the date when the days of purification would end and the offering would be made for each of them.When the seven days were nearly over, some Jews from the province of Asia saw Paul at the temple. They stirred up the whole crowd and seized him, shouting, “Fellow Israelites, help us! This is the man who teaches everyone everywhere against our people and our law and this place. And besides, he has brought Greeks into the temple and defiled this holy place.” (They had previously seen Trophimus the Ephesian in the city with Paul and assumed that Paul had brought him into the temple.)The whole city was aroused, and the people came running from all directions. Seizing Paul, they dragged him from the temple, and immediately the gates were shut. While they were trying to kill him, news reached the commander of the Roman troops that the whole city of Jerusalem was in an uproar. He at once took some officers and soldiers and ran down to the crowd. When the rioters saw the commander and his soldiers, they stopped beating Paul.

So Paul went with the plan, took the vow, shaved his head and still got his butt kicked (to put it mildly).

So why is everyone so infuriated with Paul in Jerusalem; particularly the Jewish “believers?”

It really does seem like a big misunderstanding to me. These Jewish believers believed Paul was teaching the Jews to turn away from the customs and traditions of Moses, such as circumcising their children. Paul was obviously not against circumcision. Ask poor Timothy. In actuality, Paul was teaching the uncircumcised Gentiles that circumcision was not necessary to receive salvation by faith through grace and become a follower of Jesus.  Paul was against adding anything to the gospel of Jesus Christ.

What’s most confounding about this story is we have so-called Jewish believers literally trying to kill Paul. It just goes to show that the greatest threat to the gospel doesn’t usually come from the outsiders but from the insiders. Religion can be treacherous.

Jerusalem is a dangerous city and for all the reasons we wouldn’t expect. Pray for the peace of Jerusalem, said the Psalmist. It’s a pretty tall order.

In today’s case, the heroes are the officers and soldiers. Thank God for the Romans.

Where have you experienced the treachery of religion—and I mean Christianity? What was going on there?