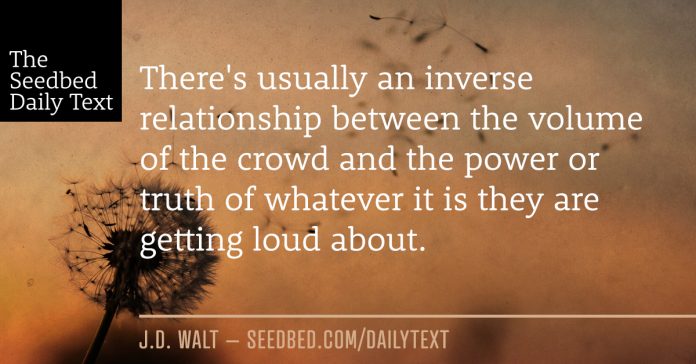 When they heard this, they were furious and began shouting: “Great is Artemis of the Ephesians!”Soon the whole city was in an uproar. The people seized Gaius and Aristarchus, Paul’s traveling companions from Macedonia, and all of them rushed into the theater together. Paul wanted to appear before the crowd, but the disciples would not let him. Even some of the officials of the province, friends of Paul, sent him a message begging him not to venture into the theater.

The assembly was in confusion: Some were shouting one thing, some another. Most of the people did not even know why they were there. The Jews in the crowd pushed Alexander to the front, and they shouted instructions to him. He motioned for silence in order to make a defense before the people. But when they realized he was a Jew, they all shouted in unison for about two hours: “Great is Artemis of the Ephesians!”

The city clerk quieted the crowd and said: “Fellow Ephesians, doesn’t all the world know that the city of Ephesus is the guardian of the temple of the great Artemis and of her image, which fell from heaven? Therefore, since these facts are undeniable, you ought to calm down and not do anything rash. You have brought these men here, though they have neither robbed temples nor blasphemed our goddess. If, then, Demetrius and his fellow craftsmen have a grievance against anybody, the courts are open and there are proconsuls. They can press charges. If there is anything further you want to bring up, it must be settled in a legal assembly. As it is, we are in danger of being charged with rioting because of what happened today. In that case we would not be able to account for this commotion, since there is no reason for it.” After he had said this, he dismissed the assembly.

In order to win this battle that has absolutely nothing whatsoever to do with the game on the field, the home team fans shout louder, “We’ve got spirit yes we do! We’ve got spirit how bout you?” Then the visitor’s side takes another turn. Next the whole thing devolves when the home side pushes the “We’ve got more! More! More!” button and before you know it everyone in the whole place is shouting it and from there it devolves further into the dreaded “Wave” or worse!

I’ve often wondered what the players on the field thought about this practice. After all, the fans aren’t exactly cheering for the players. They are cheering for themselves. My son Sam has an appropriate saying for a moment like this. . . . “What the what?!”

Something of this kind of thing is happening in today’s text. (Just in case you succumbed to the temptation to skip reading the Word of God today in order to get to the infinitely less important words of me—go back and read it now.)

There’s usually an inverse relationship between the volume of the crowd and the power or truth of whatever it is they are getting loud about. Volume, or force, doesn’t tend to make the “truth” get louder or more powerful. More often than not, it calls the truth of the “truth” into question.

The city clerk had it right as he spoke to the frenzied Ephesian Chamber of Commerce when he said,

Fellow Ephesians, doesn’t all the world know that the city of Ephesus is the guardian of the temple of the great Artemis and of her image, which fell from heaven? Therefore, since these facts are undeniable, you ought to calm down and not do anything rash.

This is what faith looks like. Bad god, but good faith.

It reminds me of Elijah’s famed encounter with the 450 prophets of Baal on the top of Mt. Carmel. As the prophets got louder and louder and their antics grew more and more redonkulous, Elijah opted not to enter into a “spirit battle,” but rather to call on the name of the Lord. Take a minute and read the story here. It will be on the test.

Bottom line: Our spirit battles bring nothing to the truth of the gospel. Truth is its own witness. The truth of the gospel inspires quiet confidence and bold reserve. The gospel is a “power” in and of itself. It’s the power of God for the salvation of all who believe. We need never be ashamed of it, nor do we need to put on a spirit show.

Has the truth of “Jesus is Lord” upended anything in your life? Or have you slid Jesus into a comfortable place on the mantle alongside the pantheon of other gods we salute?