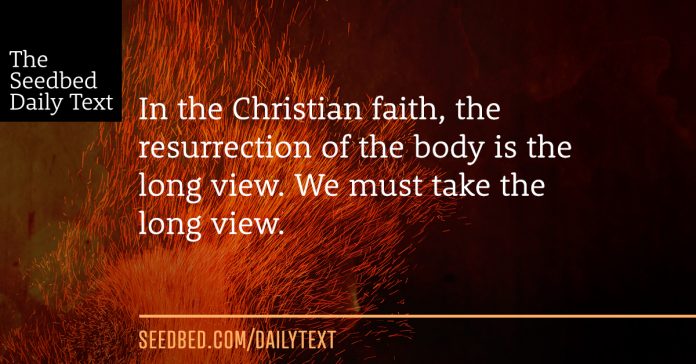 18 Then the Sadducees, who say there is no resurrection, came to him with a question.19 “Teacher,” they said, “Moses wrote for us that if a man’s brother dies and leaves a wife but no children, the man must marry the widow and raise up offspring for his brother.20 Now there were seven brothers. The first one married and died without leaving any children. 21 The second one married the widow, but he also died, leaving no child. It was the same with the third. 22 In fact, none of the seven left any children. Last of all, the woman died too. 23 At the resurrection whose wife will she be, since the seven were married to her?”

24 Jesus replied, “Are you not in error because you do not know the Scriptures or the power of God? 25 When the dead rise, they will neither marry nor be given in marriage; they will be like the angels in heaven. 26 Now about the dead rising—have you not read in the Book of Moses, in the account of the burning bush, how God said to him, ‘I am the God of Abraham, the God of Isaac, and the God of Jacob’? 27 He is not the God of the dead, but of the living. You are badly mistaken!”

This is starting to feel like an episode of the popular game show, Jeopardy. Today’s question from the Sadduccees brings even more drama to the plot of co-conspirators surrounding Jesus.

First for a little background, the Sadduccees enjoyed an aristocratic reputation. They strike me as the sophisticates of the Jewish pantheon of religious players. Like the Pharisees and the Scribes, they highly valued the Scriptures though they advocated for their own interpretation.

In particular, the Sadducees did not believe in the Resurrection of the dead. For them death meant the party was over. This question was a bit of a ruse.

At the resurrection whose wife will she be, since the seven were married to her?”

Why would they ask a question about “the resurrection” they did not believe in? In their minds, this complicated riddle of a question would expose not only Jesus’ faith in the resurrection of the dead but also its absurdity. Jesus sees straight through them and indicts them for their bad exegesis (method of interpreting Scripture) and chides them for their lack of faith in the power of God.

Jesus replied, “Are you not in error because you do not know the Scriptures or the power of God?

First Jesus gives an authoritative word about the resurrection of the dead and marriage. Bottom line? Marriage ends with death. In the resurrection there will be no marriage. There is a much larger covenant at work within which the covenant of marriage is controlled. The covenant between God and his people supersedes the covenant of marriage. It outlasts it. Next he takes on their biblical interpretation by citing a covenant oriented text he knew they embraced, Exodus 3:6. It’s the burning bush story when God says to Moses,

My sources make an interesting case for Jesus application of this text. It goes like this. In this covenant affirmation, God affirms his faithfulness to Abraham, Isaac and Jacob which is a covenant that transcends death. Of what worth would it all be if only for the infinitesimally short period of time in which a person is alive on this earth? This God has power over sin and death. God is a God of the living and in his Kingdom though people die because of the curse of sin, yet shall they live because of the promise of resurrection. Jesus then rebukes with these words:

You are badly mistaken!

It’s probably as close as he will come to calling someone an idiot. He’s telling them that their big problem is they don’t believe what they believe. In other words, if you believe in the God of Abraham, Isaac and Jacob you believe in the resurrection of the dead. You don’t get one without the other.

Moving this forward a couple of thousand years let’s ask ourselves this question: Do I believe in the resurrection of the dead? I’ve said it ten thousand times in the Apostles Creed,

“I believe in the Holy Spirit, the Holy catholic Church, the communion of saints, the forgiveness of sins, THE RESURRECTION OF THE BODY, and the life everlasting.”

Over the past couple hundred years we have mostly bought stock in the idea of an ethereal “heaven” where disembodied spirits enjoy the presence of God and loved ones who have gone before—you know, the “better place” we reference when a person dies. I don’t want to diminish anyone’s faith in the immediacy of being in the presence of God at one’s death. After all, Paul clearly said, “To be absent from the body is to be present with the Lord.” I do want to say “heaven” as we commonly conceive of it is not the long view. The long game is the RESURRECTION OF THE BODY AND THE LIFE EVERLASTING. The long view isn’t “heaven”; it’s Earth—as in “on Earth as it is in Heaven.” (watch this video for more on that)

The RESURRECTION OF THE BODY is our core faith. As Paul also said,

For if the dead are not raised, then not even Christ has been raised. And if Christ has not been raised, your faith is useless; you are still in your sins. Furthermore, those who have fallen asleep in Christ have also perished. For if only in this life we have hope in Christ, we should be pitied more than anyone. 1 Corinthians 15:16-19.

So how do you like that: TTLV? I’m feeling a global T-Shirt campaign coming on. You in? ;0)

Spirit of the Living God, fall afresh on me. Lord Jesus, not only are you risen but you are the Resurrection. And you are the Life. Open up my field of vision to take the long view of eternity—the Resurrection of the Dead and the life everlasting. Melt me. Mold me. Fill me. Use me. For the glory of your name, Jesus. Amen.

So how about it? Do you believe in the resurrection of the dead? Is it core to your faith or peripheral? What difference might taking the long view have in your every day life?