Undercover Boss: When Jesus Shows Up at Your Church - Seedbed
close
Menu 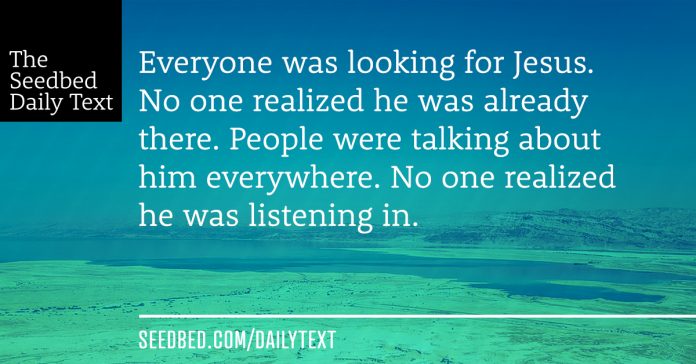 I really want you to come to our Night With New Room event on September 25, 6-8pm Central. It is going to be a powerful time of sowing for a great awakening. All online—No charge—Must Register Here.

However, after his brothers had left for the festival, he went also, not publicly, but in secret. Now at the festival the Jewish leaders were watching for Jesus and asking, “Where is he?”

Among the crowds there was widespread whispering about him. Some said, “He is a good man.”

Others replied, “No, he deceives the people.” But no one would say anything publicly about him for fear of the leaders.

Not until halfway through the festival did Jesus go up to the temple courts and begin to teach. The Jews there were amazed and asked, “How did this man get such learning without having been taught?”

There’s a show on television for the past few years called Undercover Boss. In each episode the CEO of a large company shows up on the job disguised as a rank-and-file employee. For better or worse, the CEO gets to observe the company through the eyes of its workers. It usually results in several key changes in the company that make life better for those who work there.

Today’s text gives us something of this scenario when Jesus makes a secret visit to one of the key festivals of worship in Jerusalem. What might this have been like for him? Was he inspecting the liturgy and rituals, making sure they had crossed all the “T”s and dotted all the “I”s? Did he score the number of hymns versus praise choruses? Was he looking into the hearts of the people, seeing past the form of the festival and searching for the fire he wished were already built? Was he paying particular attention to who was not present at the feast, namely the least, the last, and the lost?

Among the crowds there was widespread whispering about him.

I sometimes wonder if it has become this way in my life. I’m searching for Jesus—meanwhile he’s sitting down the pew from me. I’m looking to experience him in the sacrament—meanwhile he’s the one right behind me in the line. I want to feel his presence in a song while his voice sings out in the cries of the people far from me—who have no sanctuary of protection from the sufferings of their lives.

What would be different if we knew Jesus were there, like the undercover CEO? In our churches? In our homes? In places of great need? Didn’t he say something to that effect, like, “as you have done it to the least of these my brothers and sisters you have done it unto me” (see Matthew 25:40)?

I know. I know. That’s not what this text is about. Or is it?

Abba Father, we thank you for your Son, Jesus, who hides himself in plain view. He is the King of the universe yet he came in the disguise of a servant. Come, Holy Spirit, and awaken us to see him and in seeing him to know him and in knowing him to love him. We pray in Jesus’ name, amen.

2. Do you live your day to day life with the awareness that Jesus is present? What would it mean to look for him?

3. What would change about church if we knew that we knew he was there?

© Seedbed 2021
Undercover Boss: When Jesus Shows Up at Your Church
MORE STORIES