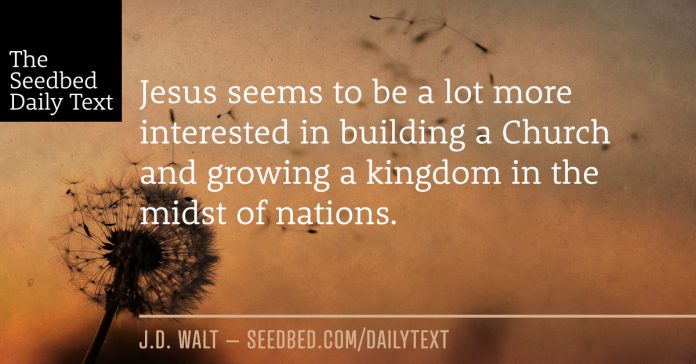 One night the Lord spoke to Paul in a vision: “Do not be afraid; keep on speaking, do not be silent. For I am with you, and no one is going to attack and harm you, because I have many people in this city.” So Paul stayed in Corinth for a year and a half, teaching them the word of God.

Some years back in the midst of a tumultuous time in my family’s life I began to repeat a short creed over and over. I emblazoned it on a small wooden shield I cut out of a piece of plywood. The words of the creed?

I remember one of my children making this remark: “But Dad, it says this on all our money.” I thought to myself, “She’s right. But maybe that’s what’s wrong.” A nation with a “Christian” self-understanding would put such an inscription on its currency, but for a nation who does not understand itself as “Christian” such an inscription is utterly meaningless. It raises questions such as, “Who is God? Who are we? And what does it mean to “trust”?

In some measure, maybe we are where we are today in the USA because we assumed that putting such inscriptions on our money, and pledging allegiance to flags of a nation “Under God,” and praying at Friday night football games, would somehow get it done. It didn’t.

We live in Corinth. It’s time we realized that trust in God must become insanely personal before it ever has a fighting chance of becoming anything resembling “corporate” again.

Who is God? Who are we? What does it mean to trust? This comprises the curriculum behind this little creed.

What does this have to do with today’s text? Thanks for asking.

In a post-Christian nation, where the odds of making even a dent in the cultural fabric are overwhelmingly against you, we need to hear the Word of the Lord to Paul.

“Do not be afraid; keep on speaking, do not be silent. For I am with you and no one is going to attack or harm you, because I have many people in this city.”

In the end, it’s not even about a “Christian nation” as though a “nation” could somehow be “Christian.” Jesus seems to be a lot more interested in building a Church and growing a kingdom in the midst of nations.

We trust God! I think I’m going to dig that little shield of a sign back out and put it next to the front door so we can tap it as we leave the house every day‑in the same way a Notre Dame Football Player touches the sign, “Play Like a Champion Today” as they enter the playing field.

Does this reflection discourage or encourage you concerning the present and future of your own country or culture? Why?