Wake Yourself Up! - Seedbed
close
Menu

36 Then Jesus went with his disciples to a place called Gethsemane, and he said to them, “Sit here while I go over there and pray.” 37 He took Peter and the two sons of Zebedee along with him, and he began to be sorrowful and troubled. 38 Then he said to them, “My soul is overwhelmed with sorrow to the point of death. Stay here and keep watch with me.”

39 Going a little farther, he fell with his face to the ground and prayed, “My Father, if it is possible, may this cup be taken from me. Yet not as I will, but as you will.”

40 Then he returned to his disciples and found them sleeping. “Couldn’t you men keep watch with me for one hour?” he asked Peter. 41 “Watch and pray so that you will not fall into temptation. The spirit is willing, but the flesh is weak.”

42 He went away a second time and prayed, “My Father, if it is not possible for this cup to be taken away unless I drink it, may your will be done.”

43 When he came back, he again found them sleeping, because their eyes were heavy.44 So he left them and went away once more and prayed the third time, saying the same thing.

45 Then he returned to the disciples and said to them, “Are you still sleeping and resting? Look, the hour has come, and the Son of Man is delivered into the hands of sinners.46 Rise! Let us go! Here comes my betrayer!”

They couldn’t hold their eyes open, so they slept. Jesus practically begged them to stay awake and keep watch with him. They missed their moment. By far, Jesus faced the deepest most agonizing distress in his life. “My soul is overwhelmed with sorrow to the point of death. Stay here and keep watch with me.”

We’ve never seen the Son of God so vulnerable and in need. How could they sleep in such a moment as this? When he came back, he again found them sleeping, because their eyes were heavy.

The only way to miss such a moment as this is to fail to understand the nature of the moment. It’s easy enough for us to spot it in hindsight. At the time, it was not so evident. Perhaps they thought Jesus was misreading the moment—that he was overreacting—that everything would be OK. After all, they had been to this garden many times before, and Jesus was something of a man of sorrows. Why was this night so different? He tried to warn them. He told them one of them would betray him, Peter would deny him and all of them would desert him. They missed it.

How? The reason they slept is because they were already asleep. They slept through the whole thing. Though they had been with him constantly for three years they had not awakened to the moment in which they lived. Of all people, they were certain they understood exactly who Jesus was. Meanwhile, all along the way Jesus had been pointing out the ones—like the woman who wasted the costly perfume—who truly “got it.”

What about us? The great self-deception we face is to think hindsight really is 20/20. My growing conviction is we are living in a time of profound sleep, and no-one knows it. We are not understanding the urgency of the times in which we live. What would it look like to wake ourselves up? I think it would start with the deeply humbling question—could it be true? Could we really be asleep?

Almighty God, we want to bow low before you today and become very open and honest before you. Are we asleep to the moment in which we live? Am I asleep? Shake me free from my own self-assuredness that I might be awakened to true reality. Emblazon on my mind’s eye the image of those three sleeping disciples. For our sake and in Jesus name, Amen. 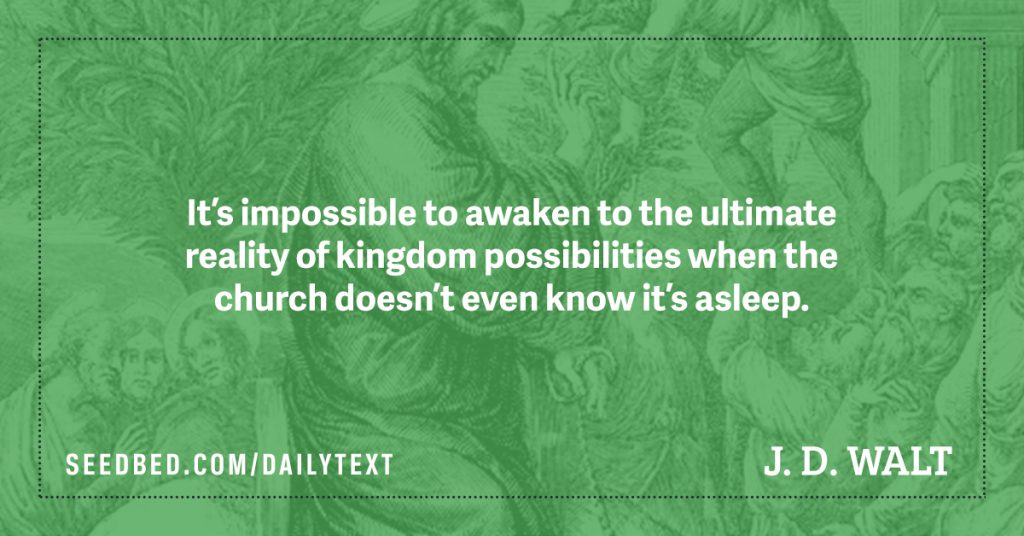 1. Could we be so caught up in the American dream that we literally can’t awaken from it? Is it possible?

2. Are you pretty sure you are already awake to the will and work of God in our times? How would you know?

3. How about our churches? Have we become so domesticated by the age in which we live and programmed by its agenda that we are missing the moment right in front of us? Again, how would we know?