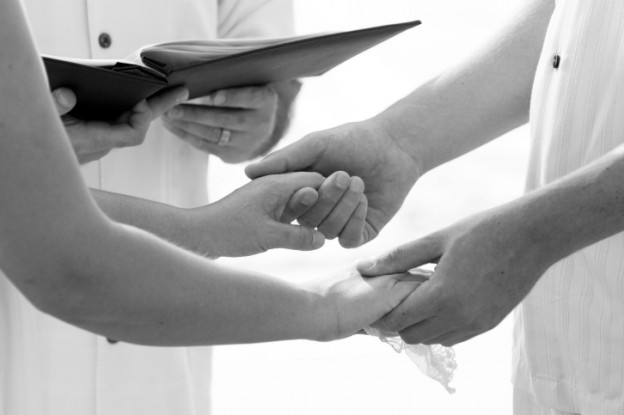 Ask most pastors which they’d rather do, a wedding or a funeral, and most will tell you they’d take the funeral every time. There are a lot of reasons for that, but I like to explain it terms of focus. At a funeral, everyone is focused on their own mortality, so their attentiveness to spiritual things is heightened. There is anxiety, but it is a focused, real, tangible anxiety—an anxiousness to hear a word from the Lord.

Weddings, on the other hand, often have a different kind of anxiety, which is really a disproportionally whacko brand of anxiety. It’s amazing to see what people will be wrapped around the axle about as so much pressure is put into a day full of too many expectations. What is supposed to be a joyous occasion often winds up as a Maalox moment, not only for the wedding party but for the pastor as well. Every pastor has stories about whacked out weddings and I’ve got more than my share:

Still, a wedding is prime time to offer a word from the Lord to the couple, and maybe even more so to the assembled congregation, which likely contains a lot of people who only come to church on a special occasion like this. While wedding homilies are usually brief, the preacher has an opportunity to use those moments to turn everyone’s attention from the flowers and the puffy-sleeved bridesmaids’ dresses to the reality of marriage as a reflection of God’s love for God’s people.

There seems to be a standard set of texts that get used for wedding homilies. Paul’s treatise on love in I Corinthians 13 is one that even the least churched person in the room has heard before. The statement of Ruth 1:16 has also been popular: “Where you go, I will go and where you stay, I will stay.” The problem with using these texts, however, is that they’re usually heard out of context. Paul, for example, is talking to a couple but to church full of people at odds with one another, and the Ruth text is about committing to travel with one’s mother-in-law, which is actually not something either bride or groom might be psyched about.

A good contextual wedding homily, on the other hand, will focus on texts like these through the lens of the larger biblical themes of which marriage is a sign: the themes of love, faithfulness, and mission.

Love. In English we only have one word for “love” and we use it in such a way that its meaning is confusingly relative. I might say, “I love pizza” and then, in the next sentence say, “I love my wife.” Same word, two different meanings (hopefully). In biblical Greek, of course, the writers of the New Testament had a more interesting palette of words from which to choose. There is the philos of friendship, the eros of romance (or as one of our youth put it once, “Woo Baby Love”), or the storge love of a parent for a child. The word used most often in the Bible, however, is agape, which is more about the lover than the object of his or her love. Agape reflects the kind of love God has for us—sacrificial, self-giving, unconditional—and it is agape that is the key to a good marriage. Yes, we need all the other words, too, but when you get beyond the romance of the wedding day it’s the presence of agape or the lack of itthat ultimately makes or breaks a marriage. Paul’s exhortation to the Colossians to “put on agape” over everything else (3:14) is a great theme for a wedding homily and a reminder to both the couple and the congregation that even on those days when we might temporarily fall out of “like” with one another, agape is a commitment that transcends feeling and continues to offer itself to the other just as God offers it to us. You might then go on to use I Corinthians 13 as an illustration of that that agape looks like in practice.

Faithfulness. The “leaving and cleaving” passage of Genesis 1:24 is often underutilized in wedding homilies, but it’s a critical one for understanding faithfulness. In a culture with a high divorce rate, where cohabitation before marriage is the norm, the idea of becoming “one flesh” in the marriage covenant needs exploration and explanation. It was important enough for Jesus to use in his argument against divorce (Matthew 19:1-12),

and it’s important for couples to hear from the Scriptures that they were designed to be together for the long haul. Indeed, Paul compares the faithfulness of husbands and wives to the faithfulness of Christ toward his church (Ephesians 5:21-33). The preacher might compare these passages about faithfulness to the marriage vows the couple is about to take, adding a bit of instruction in every day faithfulness in the midst of a wedding day that will soon enough be consigned to a photo album on a shelf. It’s also an opportunity for those long-time and would-be couples sitting in the congregation to consider their own faithfulness to each other and God’s faithfulness to them.

Mission. Here’s a theme that’s rarely explored in a wedding but one that may actually get the couple and congregation thinking in a different direction. God’s design for marriage was, from the very beginning, to be a missional partnership in which the couple works together to reflect the gracious reign and rule of God on the earth (Genesis 1:26-28). The “image of God” is manifested in both male and female and together they are designed to be “fruitful.” While we rightly think about that “fruitfulness” in terms of raising a family (itself a reflection of the nature of God as Trinity), it also makes me think of the kind of “fruitfulness” Jesus talks about in John 15. We have been created, purposed, and commissioned to “bear much fruit” that will last (John 15:16). Encourage the couple to consider their mission and the question: How will your marriage bear fruit for God’s kingdom? What will need to be pruned in order to make you more fruitful? How will you, together, abide in Jesus so that you can stay fruitful?

Yes, weddings can be stressful but with some careful preparation and the help of the Holy Spirit you might just start a revival on the aisle runner!