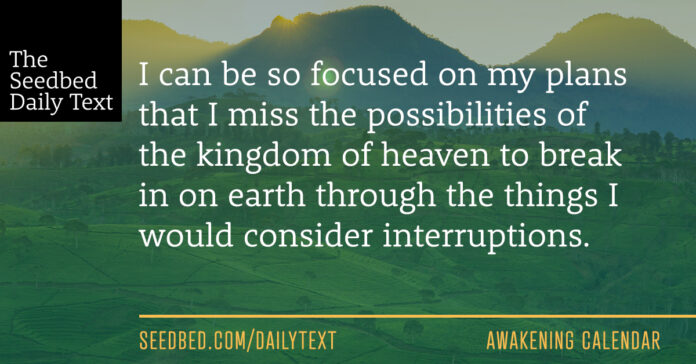 On the third day a wedding took place at Cana in Galilee. Jesus’ mother was there, and Jesus and his disciples had also been invited to the wedding. When the wine was gone, Jesus’ mother said to him, “They have no more wine.”

“Woman, why do you involve me?” Jesus replied. “My hour has not yet come.”

His mother said to the servants, “Do whatever he tells you.”

Nearby stood six stone water jars, the kind used by the Jews for ceremonial washing, each holding from twenty to thirty gallons.

Jesus said to the servants, “Fill the jars with water”; so they filled them to the brim.

Then he told them, “Now draw some out and take it to the master of the banquet.”

They did so, and the master of the banquet tasted the water that had been turned into wine. He did not realize where it had come from, though the servants who had drawn the water knew. Then he called the bridegroom aside and said, “Everyone brings out the choice wine first and then the cheaper wine after the guests have had too much to drink; but you have saved the best till now.”

What Jesus did here in Cana of Galilee was the first of the signs through which he revealed his glory; and his disciples believed in him.

There is only one reason we know about this little village called Cana of Galilee.

On the third day a wedding took place at Cana in Galilee.

A wedding, of course, is a pretty common occurrence (unless, of course, its your wedding) at which point it becomes a hopefully once in a lifetime spectacular red letter day event.

Or, unless this happens: Jesus’ mother was there, and Jesus and his disciples had also been invited to the wedding.

Isn’t that just amazingly ordinary? They invited Jesus and his disciples to the wedding. Did they imagine that they would be holding the most famous wedding in the history of the world (since Adam and Eve)—one we would never stop talking about and yet we still have no idea who the bride and groom were? They invited Jesus to their wedding. Something tells me he became a big part of their marriage. It reminds me of that sign I saw on the freeway—a message from God no less— black billboard, white letters: Loved the wedding. Invite me to the marriage. -Jesus.

But I digress. or maybe not. Get a picture of Jesus at this wedding. He’s walking around just like you, looking for people he knows to talk to, laughing, maybe cutting up a bit—just having a good old time. This is the stuff between the lines we are invited to ponder in our hearts and allow to kindle in our minds. Then this happens:

When the wine was gone, Jesus’ mother said to him, “They have no more wine.”

This must provoke a thousand curiosities in us. Like, how did this become a problem for Jesus mother? Maybe she was besties with the mother of the bride? Maybe she just felt the embarrassing gravity of the developing moment and knew she knew a certain someone who could help. It makes us wonder what she had seen him do before. This is more than a little bit unusual. “They’re out of wine. I’ll talk to my son, Jesus. He can fix this.”

Get his uber human response: “Woman, why do you involve me?” Jesus replied. “My hour has not yet come.”

So here’s the hidden obvious insight—Jesus had other plans for himself that day. He didn’t intend to get involved with the wedding catering crew. Turning water into wine was not on the “To-Do” list that day. He did not want to get involved in this wine problem. He did it anyway. Think through a lot of the happenings and incidents of Jesus life. On so many occasions he was on the way to do something else when some person or situation interrupted him with their crisis or need.

Remember the time he was just arriving on shore when Jairus came with urgent pleas to come and save his young daughter? On the way there the woman who had been bleeding for twelve years reaches out and intercepts him. They get back on track only to be intercepted again with messengers that the girl is dead. Then there was the time he was teaching in someone’s home and the guys dug through the roof to lower their paralytic friend in front of Jesus because they couldn’t get through the door.

I guess I’m observing this: Jesus was not his own. His schedule was not his own. He was willing, almost constantly, to get involved in apparently unplanned moments and unforeseen situations. That is a quite different “mindset” than I often carry with me. I can be so focused on my plans (which I often conflate with God’s will) that I miss the possibilities of the Kingdom of Heaven to break in on earth through the things I would consider interruptions. In other words, I don’t think I am thinking like Jesus thinks a lot of the time. It’s why I need the mind of Christ.

What if we can only actually see and understand the plan retrospectively? When we read the story now it seems like it all went according to a plan, right? An apparently unplanned interruption, and an imposition at that, at the wedding of an unnamed couple in the small town of Cana turned out to be the first sign and revelation of the glory of Jesus Christ. What if that’s how it happens.

Open our eyes Lord, we want to see Jesus. Shape my mentality by the mind of Christ. Lord Jesus, give me an ever increasing awareness of your presence in me; that I might come to see as you see, to think as you think, to be guided by your agenda in every situation. I pray in your name. Amen.

What if Jesus wants to do extraordinary things in and through your ordinary life? What if he is waiting on your readiness to say yes to him at another level? Are you ready to go to the next place in the formation of the mind of Christ in you?