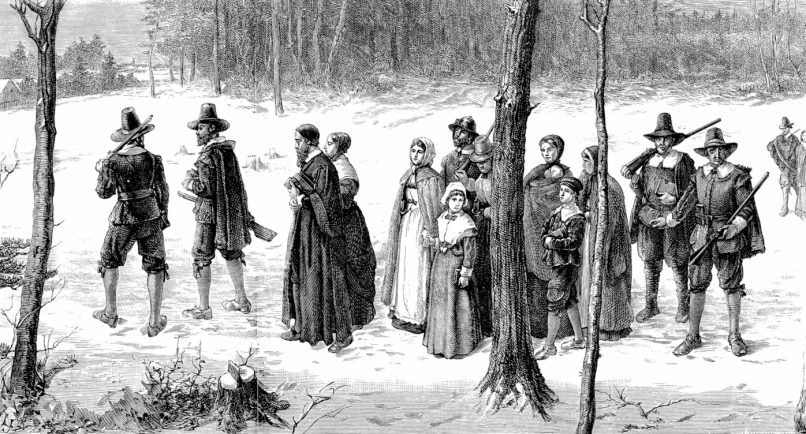 I recently finished writing a book on John Wesley, soon to be released in a new series from Crossway. The book is titled Wesley on the Christian Life: The Heart Renewed in Love. It was a delight to have a chance to immerse myself in the writings of John Wesley for a while. I first learned Wesley in the Methodist Church where I got saved, and first studied his work during an M.Div. at Asbury Theological Seminary.

As I re-read all that Wesley, I kept noticing that he sounded curiously like certain other spiritual writers I had read over the years. In particular, when he defended “heart religion” and insisted on the transforming work that the Holy Spirit works in our affections, he kept reminding me of seventeenth and eighteenth century Protestant writers: the Puritans.

The similarities show up all over the writings of Wesley, but I especially noticed them in his emphasis on happiness. Wesley famously wrote, “True religion, or a heart right toward God and man, implies happiness, as well as holiness.” (Sermon 7, The Way to the Kingdom) Wesley was serious about this happiness.

In recent times, “happiness” has come to sound like a shallow feeling, especially in response to good circumstances. Most of us think that “joy” might be deep, but “happiness” just sounds shallow. But in the eighteenth century, the word happiness carried a much deeper significance. Popular philosophers used it in a way that resonated with classical Greek and Roman ideas about the purpose of life. When they talked about “human happiness” they were pointing to the purpose for which humanity was originally created, and envisioning the complete fulfillment of that purpose. This is why the Declaration of Independence (1776) could list the pursuit of happiness along with life and liberty as basic human rights that came from God. Wesley would never have distinguished between a shallow, merely emotional happiness on the one hand and a deep, settled joy on the other, because the word happiness did not connote frivolity or shallowness to him. Happy is a good word in his vocabulary, and he uses it freely, interchangeably with the word joy. Historian Gordon Rupp points out that “happiness is a great key word in the first Methodist hymn-book, which began with a section entitled ‘Of the Pleasantness and excellence of religion.’”

Some modern readers of Wesley treat happiness, in fact, as a distinguishing mark that especially sets him apart from the Puritans of the generations before him, contrasting Wesley’s “optimism of grace” with the Puritan pessimism about humanity. But the way I see it, this emphasis on happiness is precisely what puts Wesley on the same page with the Puritan tradition. If the word “happiness” has suffered semantic drift over the centuries, the word “Puritan” has fared even worse. There is a modern bias that directs us to think of Puritanism as the opposite of happiness, and of Puritans as the frozen chosen, baptized in vinegar and weaned on a pickle. It was the scathing wit of H. L. Mencken that defined Puritanism as “the haunting fear that someone, somewhere, may be happy.” As a result of these willful distortions, as C. S. Lewis points out, “nearly every association which now clings to the word puritan has to be eliminated when we are thinking of the early Protestants. Whatever they were, they were not sour, gloomy, or severe; nor did their enemies bring any such charge against them.”

In reality, though the Puritans loved their theology, the typical Puritan book was not some argumentative doctrinal tome, but a devotional book with a title like Union and Communion, Instructions about Heartwork, The Bruised Reed, Keeping the Heart, or The Fountain of Life Opened Up. When Puritans stripped away liturgical clutter, they were usually worried that the accumulated traditions would obscure the clear teaching of heart religion. This was exactly Wesley’s point: while he loved the Anglican liturgy, he insisted that true religion resides in the heart rather than in these (excellent) outward forms and ceremonies.

In fact, with his insistence that “formality” or “mere outside religion” had “almost driven heart religion out of the world,” why didn’t Wesley take a more Puritan stance, even leading his followers out of the corrupt established church of his day? The main reason is that John Wesley, son of parents who had converted to Anglicanism as adults, was just a committed and contented Church of England man. But what he did was bring Puritan emphases inside the Church of England. One way to think of Wesley is as the Puritan who succeeded in reforming the church; the Puritan who got away with it.

Gordon Rupp points out that sixteenth-century Puritanism had been engaged in a life-and-death struggle to reform the Church of England more thoroughly. The epic conflict had been costly on both sides, and had resulted in “the violent repudiation of Puritanism.” But later, in the eighteenth century, Methodism arose as a kind of renewal of the Puritan impulse, safely ensconced within the established church. Wesley’s own grandparents had suffered the loss of freedom and of property for working outside the accepted guidelines of the religious settlement. “Now,” says Rupp, “Wesley did what the Puritans had failed to do and neither the government nor the bishops interfered.” In fact the whole catalog of Methodist measures is practically taken over from the Puritan agenda:

Here again, many of the things which Methodists did and said seemed like echoes of that Puritanism which the Church of England had rejected and which had bred in it a distaste for ‘enthusiasm.’ The Puritans had used itinerant preachers, lay preachers, field preaching; in their smaller conventicles they exercised a stricter Christian discipline than that of formal Christianity. They had been exponents, in a vast and impressive literature of spiritual and moral and dogmatic theology, of doctrines of ‘inward religion,’ of a personal walk with God, of conversion, assurance, perfection. John Wesley himself owed more than he ever knew to this Puritan tradition of his own ancestors; the very language of his theology and many of his categories are conditioned by seventeenth-century Puritan controversies.

Rupp goes on to point out that when Wesley put together a fifty-volume collection of highly-recommended spiritual writings under the title The Christian Library, “the Puritans are the largest company, even though Puritanism was a largely Calvinist tradition.” And of course long ago, Robert C. Monk wrote the definitive tracing of sources, John Wesley: His Puritan Heritage.

Perhaps it is the exaggerated Calvinist-Arminian divide of our era that keeps us from recognizing that Wesley’s spirituality is so deeply indebted to Puritan spirituality. But the fact is that Wesley’s approach to the Christian life is a Puritan approach. This accounts for why he sounds so much like his contemporary Jonathan Edwards in his insistence on religious affections. For that matter, it is why he sounds like John Owen in his insistence on holiness of heart and life, or, in our own day, why he sounds so much like J. I. Packer and John Piper. We can miss these similarities if we think the most important dividing line among Protestants is the line between Calvinists and Arminians. Instead, think of the dividing line as Wesley and Whitefield did: put all the Puritans on one side, earnestly pursuing holiness, keeping short accounts with God, and jealously norming their lives by the gospel. On the other side put those who are only concerned to be doctrinally correct, liturgically proper, or socially acceptable. What we see here is the great similarities between those who pursue heart religion earnestly, and their great difference from all attempts to ground the Christian life elsewhere.