10 The disciples came to him and asked, “Why do you speak to the people in parables?”

11 He replied, “Because the knowledge of the secrets of the kingdom of heaven has been given to you, but not to them. 12 Whoever has will be given more, and they will have an abundance. Whoever does not have, even what they have will be taken from them. 13 This is why I speak to them in parables:

14 In them is fulfilled the prophecy of Isaiah:

16 But blessed are your eyes because they see, and your ears because they hear. 17 For truly I tell you, many prophets and righteous people longed to see what you see but did not see it, and to hear what you hear but did not hear it.

“Why do you speak to the people in parables?”

It’s a great question. Parables provide fresh possibilities for awakening people to ultimate reality. Parables are catalytic change agents. What do I mean by this? On the surface, these parables in Chapter 13 seem fairly benign. After all, how controversial could a story about a farmer sowing seeds be? Stories about farmers and farming are disarming; even charming. They are immediately relatable and be they young, old or in between, most everyone can identify at some level. Any preacher (or public speaker in general) will tell you that people lean into stories.

How do stories create a context for change? They confront us from the back side. Parables sneak in under our sophisticated defense systems and solicit our agreement before we realize what we agreed to. (Remember the little lamb story the Prophet Nathan told King David?)

The most classic way parables create confrontation is through developing contrast. Jesus is a master at this. He’s always implicitly holding up two or three or even four things (in this case) and saying, “This, not that.” Not the shallow soil; not the rocky soil; for God’s sake not the path, but the good soil. This is the pay dirt. He doesn’t begin with a direct frontal assault on people. He comes in at a subterranean level (pun intended). You will remember back to talk #1, the Sermon on the Mount, where he ended by comparing a house built on the rock and a house built on the sand. He was saying very clearly, “This, not that.”

So why not just come out and say it? Because people are literally so blinded by what they already see, they can’t see what you are talking about. Our problem is we can look without seeing and hear without listening. Remember the famous Apple Computers commercial series entitled, “I’m A Mac”? To say that PC’s dominated the market at the time would be a vast understatement. Macs had a fiercely loyal, and incredibly small, user base. I remember trying to persuade some of my colleagues in those days to try an Apple computer. “Why on earth would I want to do that,” was the usual reply. They did not have “eyes to see” what i was talking about. They were blinded by what they already saw—a perfectly adequate and much cheaper Dell personal computer. Enter the “I’m a Mac” campaign. Mac literally personified their computer by choosing a slender, attractive Steve Jobs-type-looking-fellow in jeans, a t-shirt, and a hoodie. In contrast they personified the PC with a dorkish, slightly overweight suit and tie wearing dweeb. Every commercial radiated the message, “This, not that.” Before we knew it was happening they convinced us we wanted to be like the Mac guy not the PC guy. (If you haven’t seen it, google it.)

They could have put those two quite different computers side by side on the screen and listed all the differences and no-one would have seen anything different from what they already saw. Apple chose to go the “parable” route and it turned out to produce a critical turning point in one of the greatest and most unlikely Cinderella stories of all time—the triumph of Apple over Microsoft.

I’ve never met anyone who actually considered themselves to be the rocky, shallow soil or the thorn infested soil or the path. When we hear that, we assume he’s talking about someone else. We may consider ourselves at the 30fold level of fruitfulness, but we are the good soil!

See how parables work now? Everyone thinks they have eyes to see and ears to hear. Parables confront through creating an apparently benign contrast that ultimately distinguishes the hard-hearted from the humble-hearted. So back to the disciples’ question we began with, “Why do you speak to the people in parables?”

This is why I speak to them in parables: 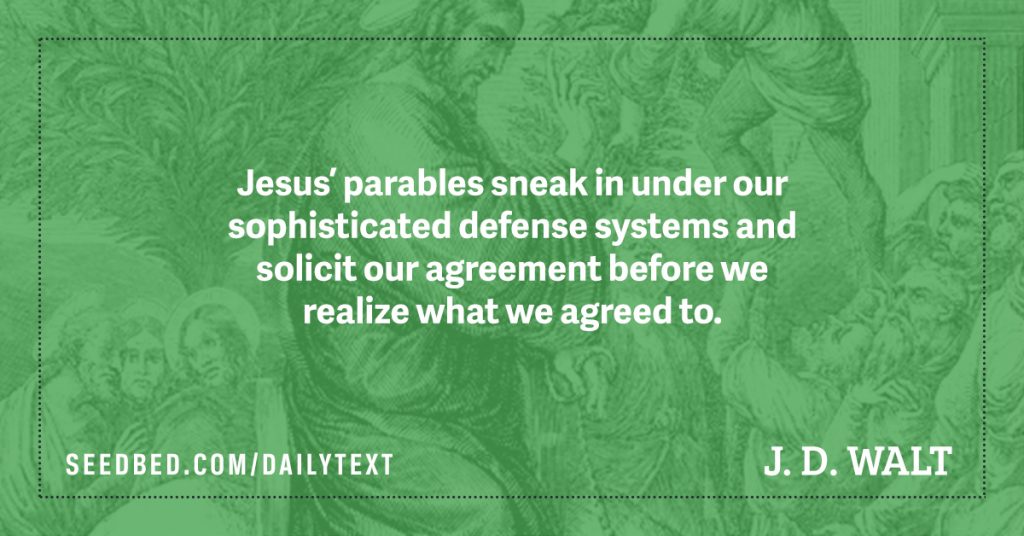 1. So do you “see” how parables work as catalytic agents of change?

2. Parables create the possibility of a genuine “aha!” or even “Eureka!” moment. Has this ever happened for you through Jesus’ parables. If not, what might this tell you about your quality of “seeing” and “hearing?”