What to Do When the Gospel Seems Harsh - Seedbed
close
Menu

What do you do when the Bible conflicts with your understanding of who God is and what God is like? Do you read over it with a, “Hmmmm that’s interesting,” and then move on? Do you approach it with a “The Bible said it. I believe it. That settles it,” approach? Or do you come to a halt and refuse to move on until you have resolved the conflict?

My approach? Thanks for asking. I wrestle with the text. Sometimes I wrestle for days and other times for years. Because I have already decided the text will win, I am able to suspend my judgment and wade into the ambiguity the particular conflict poses. I often find that confusing biblical texts are often clarified through other biblical texts.

A text like today’s is a good example. It sounds harsh. It makes what I want to think of as unconditional salvation by grace through faith a bit conditional. In other words, the plain reading of the text seems to say if I disown Jesus before others he will disown me before the Father. That doesn’t sound like unconditional love and grace as I have understood it.

And then I remember Peter, the one Jesus called “the Rock;” the one who first confessed Jesus’ messianic identity, who just so happened to “disown” Jesus, not once but three times. I suspect Jesus was probably looking straight at Peter when he said these words from today’s text. Remember this scene from Matthew 26:

69 Now Peter was sitting out in the courtyard, and a servant girl came to him. “You also were with Jesus of Galilee,” she said.

70 But he denied it before them all. “I don’t know what you’re talking about,” he said.

71 Then he went out to the gateway, where another servant girl saw him and said to the people there, “This fellow was with Jesus of Nazareth.”

73 After a little while, those standing there went up to Peter and said, “Surely you are one of them; your accent gives you away.”

Immediately a rooster crowed. 75 Then Peter remembered the word Jesus had spoken: “Before the rooster crows, you will disown me three times.” And he went outside and wept bitterly.

We can’t remember this story though, without remembering this one from John 21:

15 When they had finished eating, Jesus said to Simon Peter, “Simon son of John, do you love me more than these?”

He answered, “Yes, Lord, you know that I love you.”

Peter was hurt because Jesus asked him the third time, “Do you love me?” He said, “Lord, you know all things; you know that I love you.”

Peter, the disciple, went on to become Peter, the Apostle, who would go on to lead the earliest church from which we have all descended. The lesson for me: grace does not mean everything is OK. Nor does grace mean everything will work out. Grace means God always gives a second chance. Disloyalty to Jesus is a very serious offense. We need not try and soften it. However, it need not be a capital crime. There is always room for reinstatement. 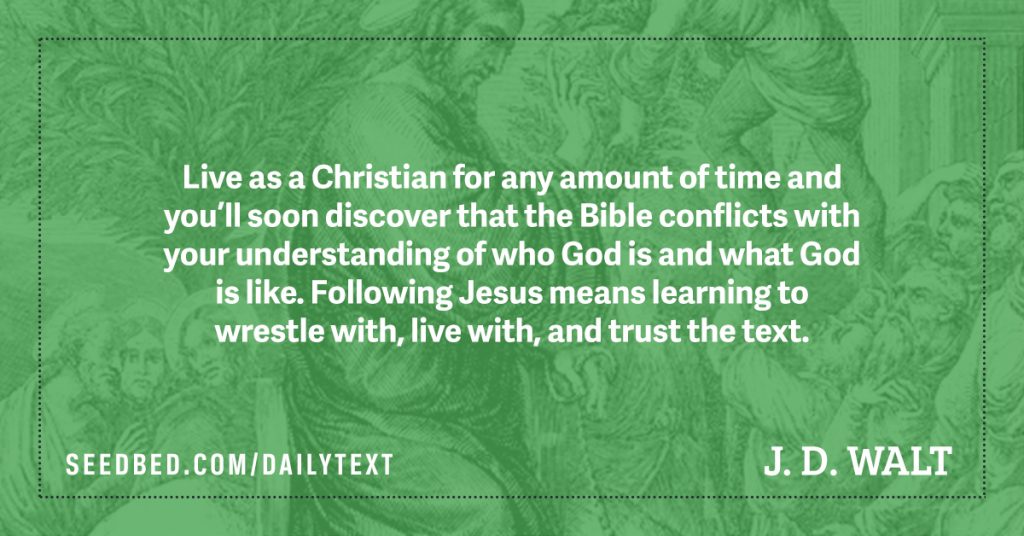 1. How do you resolve conflicts with Scripture and your own conflicting convictions or opinions about things?

2. Have you ever disowned Jesus? How did you return to him? Could it be time to stop shaming yourself for this failure and truly receive grace?

3. Do you think Peter might have become a completely different kind of follower (i.e. a true lover) of Jesus because of this failure and forgiveness he received? Why and how so?