32 While they were going out, a man who was demon-possessed and could not talk was brought to Jesus. 33 And when the demon was driven out, the man who had been mute spoke. The crowd was amazed and said, “Nothing like this has ever been seen in Israel.”

34 But the Pharisees said, “It is by the prince of demons that he drives out demons.”

Jesus preaches, teaches and heals. There are typically two very different responses. We see them in stark contrast in today’s text.

The crowd was amazed and said, “Nothing like this has ever been seen in Israel.”

But the Pharisees said, “It is by the prince of demons that he drives out demons.”

The people respond with amazed awe. The religious leadership responds with angry attacks. How is it that two people perceiving the same event could have such disparate reactions? How could these incredible healings performed by Jesus be perceived as such bad news by the religious leadership?

So why on earth would the religious leadership ally themselves against Jesus? For starters, Jesus is not part of their “establishment.” Jesus boldly claims the Kingdom they expected to come through their leadership. Jesus is not running things through headquarters, i.e. The Temple. Jesus seems to be operating outside of the official authority systems and structures. In their heart of hearts, the Pharisees believed they were holding the line on the Torah. They were the good guys and they were in power. They stood to lose prestige, position, influence, and respect; all of which adds up to power.

If we are honest, and we were in their shoes, we probably would have done the same thing. We don’t want to think this, but we must become brutally honest with ourselves. People don’t like change not because they don’t like change but because they fear what the change will personally cost them. It’s true in our families, local churches, community organizations, businesses and government.

The hardest thing to see about ourselves is our own self-interest. The greatest impediment to change, no matter how positive it might be, is our self-interest. The greatest threat to the Kingdom of God moving powerfully in our midst is not our opponents. It’s our self interest. Self interest is a reality. It’s when we fail to acknowledge and be aware of it that it becomes a risk.

It’s why Jesus will later say whoever wants to be his disciple must deny their selves. He will say that whoever wants to save their life will lose it and whoever loses their life for his sake will keep it. The Gospel goes for the jugular when it comes to self interest. Here’s the good news. Jesus doesn’t ask us to lay our self interest aside as some kind of act of self abnegation. No, he reveals to us a far greater interest to take its place—the all consuming, glorious, unparalleled interest of the Kingdom of God. Real faith is coming to the place of actually trusting that if we make Jesus’ interest our chief concern, he will make our interest his chief concern. Remember Matthew 6:33? Seek first the Kingdom of God and his righteousness and all these things will be added to you. 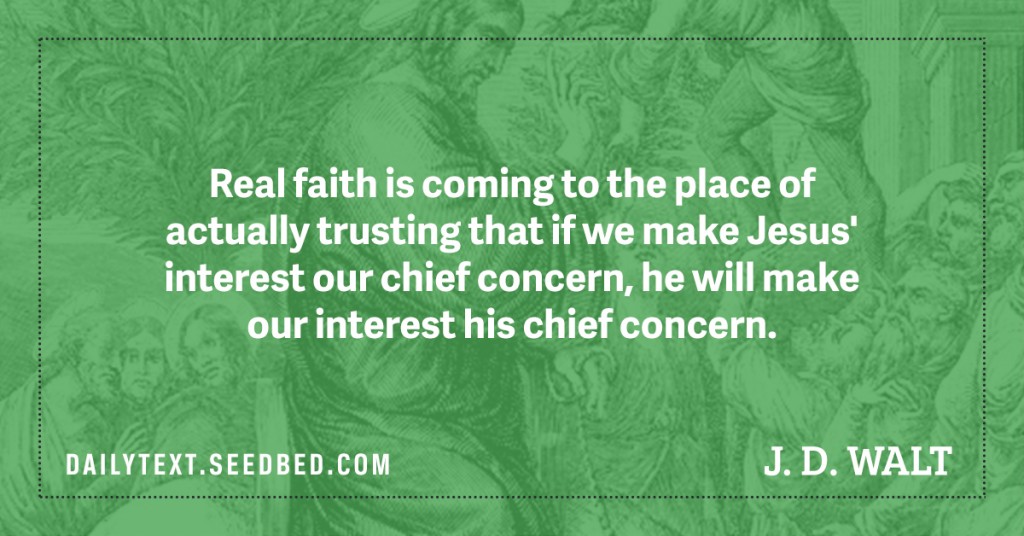 1. How do you deal with change? Think about change initiatives at work, in your family, in your church and elsewhere. Who stands to lose the most as a consequence of those changes. Who stands to gain? How about you? Where do you fall in the mix?

2.  We are the last people to discover and become self aware of our own self interest. Why is that?

3. What are ways to explore, discover and become honest about our self interest? How might other people help us with that?