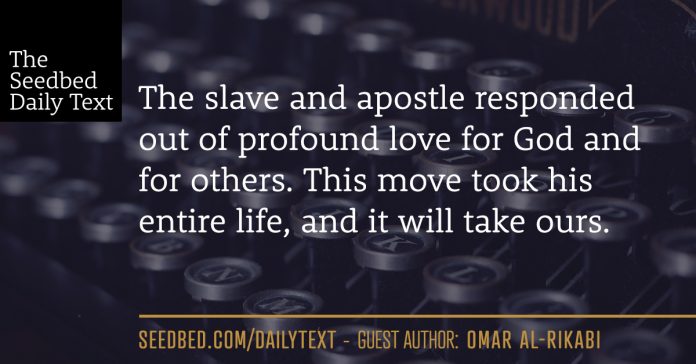 Welcome Back Omar Al-Rikabi, friend of the Daily Text Nation, who will be leading us over the next three weeks through 2 Peter. I’ll be back May 10 to begin our next series on Prayer. For the Awakening— JD Walt

1 This letter is from Simon Peter, a slave and apostle of Jesus Christ.

I preached my first sermon in 1989, my sophomore year of high school. Standing before my youth group and lots of their parents, I was certain I had arrived in the faith. But I think back to a couple of the big-idea lines I dropped with assurance on my listeners, and I cringe at the memory.

I look back at a lot of my old journals and sermons from high school, college, before seminary or right after, and I flinch at my ignorance and arrogance. But I also see a faith growing through stages of maturity then immaturity, trust and fear, selfish motives and glad surrender, and willing obedience but inconsistent discipleship.

I think many of us can testify to some version of this in our life with Christ, which is why I think so many of us say we identify with Peter. He has become the poster disciple for a follower of Jesus who’s heart is bigger than their brain.

Think about it: He’s born Simon, the blue-collar fisherman planning to live out his life in the family fishing business, literally in the backwaters of the Roman Empire.

Then he ditches the nets and follows Jesus, and Jesus changes Simon’s name to Peter, which means “rock.”

The Rock goes on to be the first disciple to confess Jesus as the Messiah, and so Jesus declares he will build his Church on Peter’s leadership. This Rock then goes on to some of his greatest hits for preachers and sermons everywhere, including:

It’s significant that he identifies himself with both names: “This letter is from Simon Peter.” Those two names tell his story, but only half of it. What’s more significant is the third title he goes by: “A slave and apostle of Jesus Christ.” That’s the rest of the story.

In the Roman Empire, slaves could also be professionals who could move up in status and authority in direct relationship to their masters. My friend, Ruth Anne Reese, points out that Peter uses the title of “slave” to declare that he is owned by Jesus Christ, and so through Jesus has his authority and status (and Paul, James, and Jude do the same thing in their letters)

And the apostles were the appointed messengers sent by Jesus to share the gospel, and so were highly respected in the early Church.

So then, as a slave and apostle, Peter is forgiven and restored by Jesus, filled with the Holy Spirit, and becomes the first preacher of the Church. God uses him to heal a man  paralyzed since birth, and to bring a dead woman back to life.

As a slave and apostle he goes to Samaria, a place he previously wanted to see God wipe off the map, to teach believers. He becomes the first to preach to Gentiles, is arrested by religious leaders, put in jail by King Herod, and is freed by angels.

And tradition says he was martyred by being crucified upside down.

So what’s in a name? “Simon Peter, a slave and apostle of Jesus Christ,” is a public confession of who he was, who he became, and who he was still becoming.

Simon Peter often responded out of selfish love for himself. The slave and apostle responded out of profound love for God and for others. This move took his entire life, and it will take ours. So be encouraged.

I’ll let one of my favorite poet-theologians, Bono, have the last word today:

“Your nature is a hard thing to change. It takes time… I’ve heard of people having life changing, miraculous turn-arounds, people set free from addiction after a single prayer, relationships saved where both parties ‘let go and let God.’ But it was not like that for me. For all that ‘I was lost, I am found,’ it is probably more accurate to say, ‘I was really lost, I’m a little less so at the moment.’ And then a little less and a little less again. That to me is the spiritual life… It has taken years, and it is not over yet.”

Heavenly Father, thank you that you love us so much just as we are, but also want to transform us more and more into the image of your Son, Jesus Christ. As you did with Simon Peter, help me to keep making that move from selfish love for me to profound love for you and others. In Jesus name. Amen.

What stage do you find your faith in the timeline of today’s story? The Simon stage, the Peter stage, or the slave and apostle stage? Where do you sense the Holy Spirit moving you?