When a Kiss Is More Than a Kiss - Seedbed
close
Menu

47 While he was still speaking, Judas, one of the Twelve, arrived. With him was a large crowd armed with swords and clubs, sent from the chief priests and the elders of the people. 48 Now the betrayer had arranged a signal with them: “The one I kiss is the man; arrest him.” 49 Going at once to Jesus, Judas said, “Greetings, Rabbi!” and kissed him.

Then the men stepped forward, seized Jesus and arrested him. 51 With that, one of Jesus’ companions reached for his sword, drew it out and struck the servant of the high priest, cutting off his ear.

52 “Put your sword back in its place,” Jesus said to him, “for all who draw the sword will die by the sword. 53 Do you think I cannot call on my Father, and he will at once put at my disposal more than twelve legions of angels? 54 But how then would the Scriptures be fulfilled that say it must happen in this way?”

This tortured scene of Jesus’ agony in the Garden of Gethsemane suddenly turns into an ambush. From the quietness of Jesus and his disciples we now see a “large crowd armed with swords and clubs.” We also find out one of Jesus’ disciples has been “carrying” when he brandishes his ear-severing sword. There is all of this commotion and chaos with people everywhere and yet there are only two people. It all comes down to this tortured exchange:

49 Going at once to Jesus, Judas said, “Greetings, Rabbi!” and kissed him.

There it is again. Not “Greetings Lord,” but “Greetings Rabbi!” And then the kiss. Betrayal with a kiss. It’s one of the most confusingly deceptive gestures in human history. To commit the greatest act of disloyalty with the greatest sign of affection. It’s somewhere on the scale between mockery and murder.

Jesus doesn’t miss the moment. This salutation of “friend,” isn’t what one would commonly think. There is a bit of a nuanced word play going on behind the English language. Jesus chose the word, “hetairos,” which means a supposed friend who turns out to be an imposter. In other words, Jesus called it what it was. As the old saying goes, “With friends like that, who needs enemies.”

It brings me back again to the point we made last week. Jesus will be Lord of all or he will not be Lord at all. Judas lived out his life with a divided heart. He loved money and he could not pry himself away from the false security it promised him. Did he even hear it when Jesus said,  No one can serve two masters. Either you will hate the one and love the other, or you will be devoted to the one and despise the other. You cannot serve both God and money. Matthew 6:24.

The great and tragic deception of trying to serve two masters is you don’t really realize where you stand until its too late. Judas chose money. He sold Jesus for a paltry thirty pieces of silver. It could be thirty million pieces of silver and its still the same. In the end he hated Jesus. He despised him. We never knew it until the very end.

Is it too harsh to put it this way: To love money is to hate Jesus? I’ve said it here before. Money is not bad. It’s just dangerous. We so want there to be some middle ground where Jesus can be something other than our Lord. Jesus can be our Savior but money will be our security. It invariably leads to betrayal and you don’t realize it until it’s too late.

Lord Jesus Christ have mercy on me a sinner. I want to think I would never betray you. Show me the deceptiveness in my own heart. I need to know that it is possible and even likely that I, too, could betray you. Jesus, I will to make you my Lord. It’s the only way I know to avoid betraying you. In your name I pray, Amen. 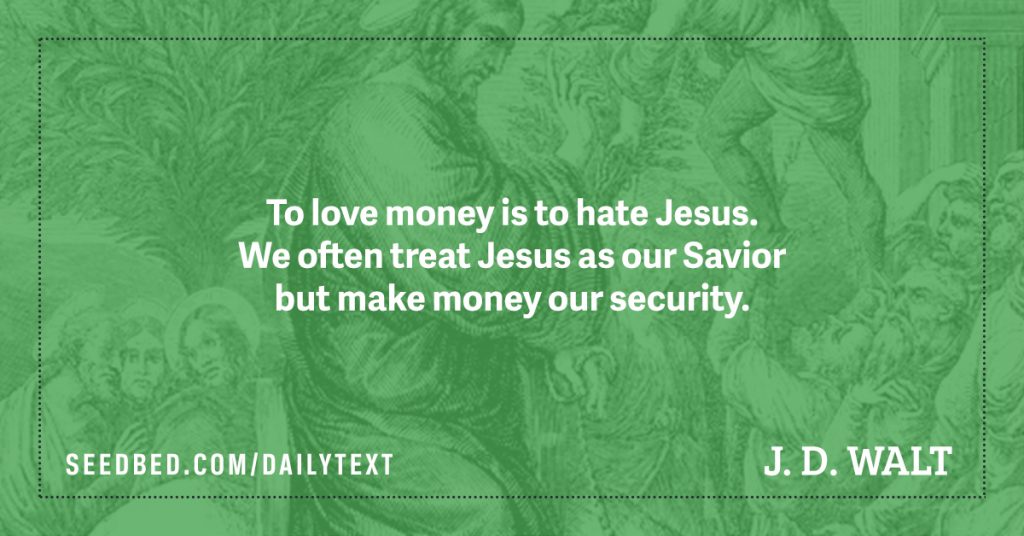 1. Could it be possible that you might one day betray Jesus?

2. Why is the middle way so seductive—of Jesus as Savior and money as security?

3. Are you open to seeing your own self deceptiveness? If so, let Jesus know that now.