When God Evicts His Own People - Seedbed
close
Menu 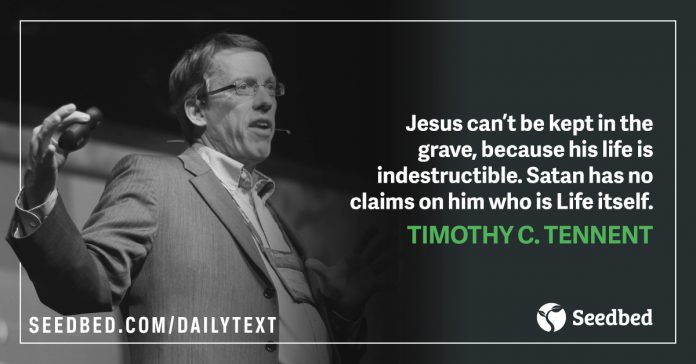 Jesus then began to speak to them in parables: “A man planted a vineyard. He put a wall around it, dug a pit for the winepress and built a watchtower. Then he rented the vineyard to some farmers and moved to another place.

At harvest time he sent a servant to the tenants to collect from them some of the fruit of the vineyard. But they seized him, beat him and sent him away empty-handed. Then he sent another servant to them; they struck this man on the head and treated him shamefully. He sent still another, and that one they killed. He sent many others; some of them they beat, others they killed.

He had one left to send, a son, whom he loved. He sent him last of all, saying, ‘They will respect my son.’

But the tenants said to one another, ‘This is the heir. Come, let’s kill him, and the inheritance will be ours.’ So they took him and killed him, and threw him out of the vineyard.

What then will the owner of the vineyard do? He will come and kill those tenants and give the vineyard to others. Haven’t you read this passage of Scripture:

‘The stone the builders rejected
has become the cornerstone;
the Lord has done this,
and it is marvelous in our eyes?’”

Then the chief priests, the teachers of the law and the elders looked for a way to arrest him because they knew he had spoken the parable against them. But they were afraid of the crowd; so they left him and went away.

In Jesus’ parable, the owner is sending a servant to the tenants to collect fruit from the vineyard. In the case of a new vineyard, it would be the custom to give the tenants three or four years to produce fruit (same length as Jesus’ public ministry), because of the nature of growing fruit trees. So, the time of waiting had expired and it was time to receive the fruit. The text dramatically shows the abuse of his servants. Finally, the owner decides to send his one and only Son. Surely they will respect him.

It is important to pause a moment to absorb this act by the owner. This is, of course, only a parable, but we shouldn’t miss the import of how Jesus is unfolding the story. If you had sent a whole stream of servants to the tenants and they had beaten or killed all of them, what does it mean to send your one and only son? It underscores the breathtaking risk of this whole enterprise we call the incarnation. The very image of finally sending his Son to make a final appeal rather than sending in the 82nd Airborne division or the Navy Seals is worth noting. The tenants conspire against the son and they say, “He’s the heir, if we kill him the vineyard will be ours” (vs. 7). So they kill him and throw his body out of the vineyard. So, Jesus asks, “What will the owner of the vineyard do?” He will come. That’s one of the most important messages of the church to any generation, especially ours. Verse 7 says, “He will come.”

Notice the three things the owner does when he comes:

First, He judges the wicked tenants. “He will come and kill those tenants” (vs. 9). God reserves His right to judge the world. He will hold this world accountable. In our time, we have downplayed God’s role in judging the world. But, He will come!

Second, he replaces the tenants with new ones “…and give the vineyard to others” (vs. 9b). This phrase by Jesus points to a deeper theological question in this text; namely, who are the true people of God? The Jews believed that they were unconditionally elected to be the people of God, and they failed to heed the warnings of God’s judgment on them. There is no guarantee that the Methodist church or the Baptist or any independent church will be found as the people of God. We must be faithful.

Third, Jesus announces the great reversal. The quotation of Psalm 118 at the end of this parable is, like a surprise ending of a tragedy, a brilliant addition to the story which dramatically changes the whole trajectory of the parable. The parable in itself only leads us to the death of the Son and the coming of the owner to judge. God sends his son into the world, and He is crucified. Is there any other divine response than judgment? Well, in a masterful move, Jesus goes right to a quote from Psalm 118, “the stone the builders rejected has become the cornerstone; the Lord has done this, and it is marvelous in our eyes.” This points us to a dramatic new possible ending to the story—the resurrection. The Son is killed and thrown out of the vineyard—God’s Son is crucified and cast into a tomb of death, but God always writes the last chapter of every story! God always has the last word! Christ will be vindicated and demonstrated to be the very cornerstone!

Jesus, as it turns out, is the One True Israelite who perfectly fulfills the Law. He can’t be kept in the grave, because His life is indestructible. Satan has no claims on Him who is Life itself. This is why Psalm 118, at this point, breaks into those familiar words: “This is the day that the Lord has made, let us rejoice and be glad in it.” The light of this day overcomes all the darkness. The whole gospel is in seed form in this parable—the final vindication of God’s servants and His people. The glorious resurrection which is the light and life around which the whole gospel and, indeed, the whole history of the world turns.

1. Is your particular denomination being faithful to the gospel of Jesus Christ? How can we best reflect our trust in Jesus Christ in the midst of the world?

2. What does this parable teach us about being the true people of God and being faithful to what He has entrusted to us?