11 Meanwhile Jesus stood before the governor, and the governor asked him, “Are you the king of the Jews?”

12 When he was accused by the chief priests and the elders, he gave no answer. 13 Then Pilate asked him, “Don’t you hear the testimony they are bringing against you?” 14 But Jesus made no reply, not even to a single charge—to the great amazement of the governor.

15 Now it was the governor’s custom at the festival to release a prisoner chosen by the crowd. 16 At that time they had a well-known prisoner whose name was Jesus Barabbas.17 So when the crowd had gathered, Pilate asked them, “Which one do you want me to release to you: Jesus Barabbas, or Jesus who is called the Messiah?” 18 For he knew it was out of self-interest that they had handed Jesus over to him.

Who is on trial here? The text says Jesus stood before the Governor. The truth is the Governor stood before Jesus. It’s interesting how when a grave injustice is committed the perpetrator winds up standing on trial for every generation thereafter. It’s why Justice matters so much. To this very day the Governor, Pilate, stands trial. The religious leaders still stand trial. Even the crowds who were swayed by the leaders still stand trial. Until one owns the injustice they participated in they will be on trial until the very end.

It is as though Pilate knows he is on trial. He seems to do everything he can to extricate himself from the situation. He doesn’t want to sentence Jesus to death. But he will not garner the courage to do otherwise. He chose political expediency over justice. It happens all the time.

At the time Pilate seemed like a towering figure in Israel. He was an officer of Rome, the Governor of a territory. Today he seems so small, a bit-actor on the stage of human history. He is forever memorialized in our Creed through those fated words, “suffered under Pontius Pilate.” He is remembered only for the injustice he helped to perpetrate.

Yes, the Governor, Pontius Pilate, was the one on trial that day and shall be forevermore.

SPECIAL NOTE: Today is election day in the United States. As you may be aware, I am in Washington, D.C., with a group of friends to sow for a great awakening. We will be gathering at the historic Francis Asbury equestrian statue to lift our eyes to a further horizon—of the coming Kingdom of God. It is my growing conviction that we find ourselves at a turning point in this nation. Though a government has its role to play in our society, the Church of Jesus Christ has a far greater role to play. In the end, this is the only institution that will be left standing. What our country most needs cannot be delivered by our government. It will only come through a great awakening of the governed—a great and sustained awakening to the love of God in Jesus Christ and the transforming power of the Holy Spirit. If we think those who represent us are corrupt, it is merely a reflection of the corruption of we who are represented. Only a broad based, grass roots awakening to the presence and power of God holds the capacity to make the difference. This is not a spiritualized solution we are seeking but for the Word of God and the Spirit of God to become redemptively active through the People of God in every sector of society.

Why Washington and the Asbury Statue? Watch this. Visit Seedbed.com/awakening for all the details.

JOIN US IN PRAYER THROUGH THIS GUIDE TO PRAYER FOR ELECTION DAY. 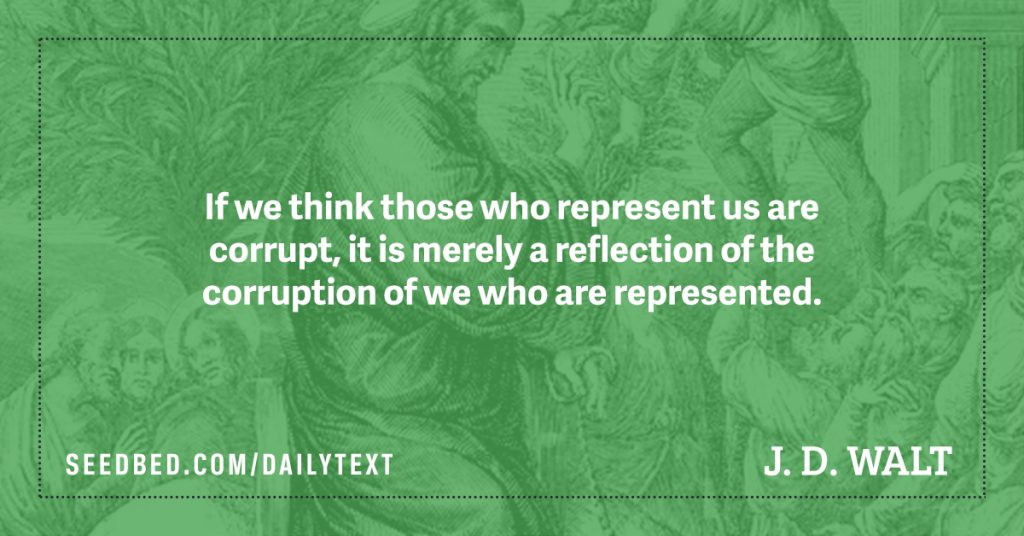 1. Do you grasp that the Church has a far greater role to play than the government in the healing of this nation and the salvation of its people?

2. Are you awakening to the great need for a great awakening? (Not a spiritualized passing revival but a comprehensive awakening touching all sectors of society)

3. Are you ready to sow for this great awakening?