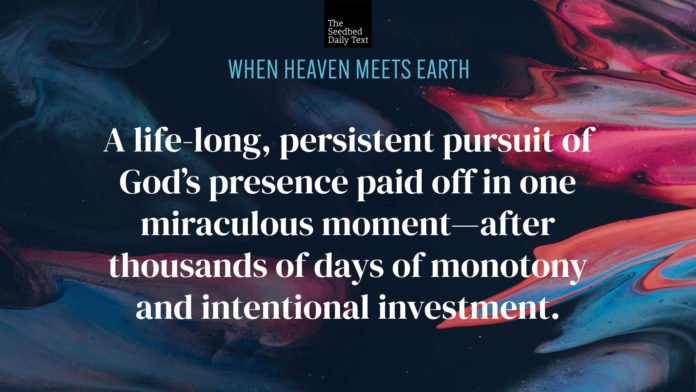 Now there was a man in Jerusalem called Simeon, who was righteous and devout. He was waiting for the consolation of Israel, and the Holy Spirit was on him. It had been revealed to him by the Holy Spirit that he would not die before he had seen the Lord’s Messiah. Moved by the Spirit, he went into the temple courts. When the parents brought in the child Jesus to do for him what the custom of the Law required, Simeon took him in his arms and praised God, saying:

“Sovereign Lord, as you have promised, you may now dismiss your servant in peace.  For my eyes have seen your salvation, which you have prepared  in the sight of all nations: a light for revelation to the Gentiles,  and the glory of your people Israel.”

The child’s father and mother marveled at what was said about him. Then Simeon blessed them and said to Mary, his mother: “This child is destined to cause the falling and rising of many in Israel, and to be a sign that will be spoken against, so that the thoughts of many hearts will be revealed. And a sword will pierce your own soul too.”

On Christmas Day the earth resounded with the glory of God. Heaven met earth with divine presence. The axis of the world shifted upon God’s arrival. The Christ child, Emmanuel, the hope of the world was born.

But as the shepherds returned to their flocks, and the stars dimmed in the sky, a holy moment shifted to an ordinary day. Days after this miraculous birth, Mary and Joseph carried on with custom and traveled to Jerusalem to fulfill religious obligation, at its best, an act of faithful, obedient worship. As Mary and Joseph entered the temple, completing the rights and rituals of Jewish law, they had another divine encounter. This one didn’t come with fanfare, but with quiet awakening, as they crossed paths with Simeon.

Simeon is an often overlooked extra in the story of Christ’s arrival, but one whose singular on-stage moment demands our study as people of awakening.  Note Simeon’s obedience in a life devoted to worship through the daily fulfillment of religious law. Most importantly, note his incredible spirit of discernment.

The text teaches us that he was a faithful participant in the temple, a righteous man. He anticipated the arrival of the Messiah, lived a life in pursuit of it, and in return, was rewarded with the presence of the Holy Spirit—long before a public outpouring of the same. Simeon had such an intimate relationship with God, that God spoke a promise only to him. Though no one knew the moment of the consolation of Israel, he would. He would get to see with his own eyes, the fulfillment of this long-standing promise. He would get to see heaven meet earth.

But Simeon’s holy moment, his divine encounter, came as a singular interaction after a lifetime of Holy Spirit pursuit. The majesty of this moment came as the result of two things, God’s gracious promise to Simeon, and Simeon’s life of intentional discernment. He lived his life in devotion to God, participating with the Holy Spirit’s work in him, attending to a life of worship, and with eyes wide open to the possibility of divine intervention at every moment.

I have to wonder if some days he cried out in desperation for promise to be fulfilled. Or if most days he lived in the joyful expectation that today could be the day. I’ve cried out to God in desperation for grief to stop its relentless pursuit after my father suddenly died in my arms, or as we heal from the full-term still birth of our daughter this summer. Many times, I’ve found joyful expectation in the ordinary to be impossible. As I juggle dirty dishes, unpacking groceries, endless email, and bedtime stories, with a heart that’s mending, am I living in quiet desperation, or could I find joyful expectation in my healing and among the mundane? When I scramble to stay ahead and struggle to engage the personal, spiritual discipline of pursing God, am I missing the chance to refine hope and discernment in me, that just may lead me to the miraculous?

The daily effort of slow, intentional pursuit will always pay off in righteousness.  And it will always lead to promise fulfilled.   Today, this day could be the day God was going to give Simeon the great gift of laying his eyes on the one who came to rescue the world. Thousands of other days of his life, he lived with hope and anticipation, but no evidence. The lack of evidence, in the fulfillment of God’s promise, didn’t deter him from a life of discipline and intimacy with God each day. Thousands of days fell short of his longing. But thousands of days of devotion made one day of revelation possible.    When he saw it, when it finally happened, he recognized it for what it was, because he had readied his spirit through obedience, discernment, and expectation. A life-long, persistent pursuit of God’s presence paid off in one miraculous moment—after thousands of days of monotony and intentional investment.   When expectation was finally met, it was so sweet that he joyfully lifted his hands, ready to leave earth for heaven. Not with desperation, but in pure delight.

Father, we long for a day like Simeon’s, when heaven meets earth, and our eyes are opened to the delight of your divine work right before us. Too often, we overlook possibility and settle for desperation. Many days, we wait for you to change our circumstances in an instant, having neglected the preparation of devotion, obedience, and discernment that makes those moments possible. As we wait for the fulfillment of your promises, help us do our part and prepare through the tedious, longstanding work of pursuing your presence. We trust you to take our expectation of your presence and make it reality.  In Jesus’ name.  Amen.

Do you tend to live each day in desperation or expectation? If the first, how might you shift to the latter? How can you specifically renew your commitment to the daily, persistent work of the disciplines to equip you for fine-tuned discernment and divine possibility each day? After all, it is possible, that you could find as much joy in that pursuit, as the surprising moments of miracle.