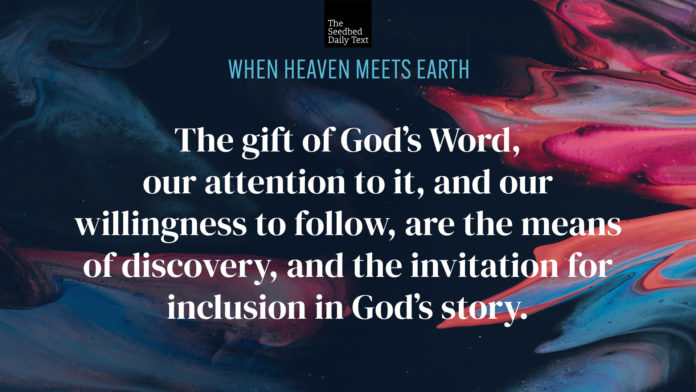 After Jesus was born in Bethlehem in Judea, during the time of King Herod, Magi from the east came to Jerusalem and asked, “Where is the one who has been born king of the Jews? We saw his star when it rose and have come to worship him.” When King Herod heard this he was disturbed, and all Jerusalem with him. When he had called together all the people’s chief priests and teachers of the law, he asked them where the Messiah was to be born. “In Bethlehem in Judea,” they replied, “for this is what the prophet has written:   “‘But you, Bethlehem, in the land of Judah, are by no means least among the rulers of Judah; for out of you will come a ruler who will shepherd my people Israel.’” Then Herod called the Magi secretly and found out from them the exact time the star had appeared. He sent them to Bethlehem and said, “Go and search carefully for the child. As soon as you find him, report to me, so that I too may go and worship him.”

In one holy birth, two miraculous stories take place.  As Christ came to his own, delivered to righteous parents, and dedicated by devoted servants at the temple, he was simultaneously revealed to outsiders, the disconnected and unexpected. Heaven met earth as a child laid in a manger, while angels visited fields nearby, and as far off men sought him at a distance. For the Wise Men, there was no angel. No verbal invitation. And certainly, no baby to prove God’s promise before they embarked on their journey. The Magi’s visit, their heaven on earth, happened under entirely different circumstances. Unlike some other players in the text, these men had been seeking the King of the Jews for some time, studying his expected arrival, and preparing for his appearance in a place where no one else sought the same.

Mary and Joseph, Anna and Simeon, even the shepherds in the fields, had likely been hopeful for the coming of a Savior. But they were with all of Israel in their longing. The Wise Men, however, had no such communal longing, no shared history. They had discovered their hope that a King was coming, and pursued his birth, of their own will and desire. Their holy encounter would begin with an intentional pursuit of a King’s coming. Their holy encounter would come to fulfillment in their study of God’s Word and their trust in divine leading.

Simeon pursued God in righteous living, and deep devotion. Anna pursued God in prayer, fasting, and a life of worship. And these Wise Men pursued God in the study of his Word, and their willingness to follow his leading. Their study of God’s story, and people, his promises and prophecies had informed them, but more importantly, it defined their belief and behavior. They were so steeped in the Word, that when heaven appeared on earth, in a miraculous leading star, they were able to see promise unfold, and trust God’s leading to get them there.

Sometimes we want God’s leading without the persistent work of learning. We ask for a sign to appear, we plead with God for our own starry night. But we neglect the instruction that leads to it. There have been many moments of my own, when I’ve wanted God to lead the way without having to think, or remember, or plan. I’ve asked him to sweep in and solve my problems without doing my part. I’ve expected God to lead, but without my participation. And God wants just that, willing, eager participants on the journey. Every time I’ve leaned into the Word to look for help, instead of throwing up my hands for a simple answer, God has always been faithful in pointing out exactly what I need on paper. The answer to my longing and searching was already typed in text. I had just failed to look. Like years ago, when I struggled to close the door on having biological children and move to adoption, I floundered and begged God to tell me what to do. My answer came, not in a flashing sign, but as the words jumped off the page to remind me that I had been adopted into God’s family too.

The truth is, miraculous moments of heaven meeting earth happen in holy births, angelic visits, and bright stars, but they also happen in the simple preparation that leads to the magnificent. These Wise Men had been encountering and experiencing God at work before they ever reached the manger. Their study and investment had revealed God to them long before . . . because they already knew they’d encounter a King, and they were ready to bow in worship.

The gift of God’s Word, our attention to it, and our willingness to follow, are the means of discovery, and the invitation for inclusion in God’s story. This invitation, of those from the east, is a preview of God’s plan to rescue the whole world, to bring the outsider in . . . and to lead those willing to seek him.

God, often we want the sign, but not the study, the destination, but not the search. Quite frankly, we want the easy way, and the bright star to lead us. Forgive us for neglecting the hunger of pursuit, the search for answers already given, and the instructions already laid out. As people in work of awakening, and hearers of your Word, awaken the hunger in us to be students of it, searching for you in every part.  So that, when the sign appears, we’re ready to follow.  In Jesus’ name we pray.  Amen.

Looking back, has God ever led you with a divine sign? If so, how did you recognize it? Were there any circumstances of your life that prepared you to follow its leading? Or are you in a season of searching now? What is necessary for you to grow in desperate hunger for God’s Word, to prepare you to follow? It may be, the sign you’ve been looking for, is there already.