4 Jesus replied, “Go back and report to John what you hear and see: 5 The blind receive sight, the lame walk, those who have leprosy are cleansed, the deaf hear, the dead are raised, and the good news is proclaimed to the poor. 6 Blessed is anyone who does not stumble on account of me.”

Let’s begin by remembering where we left off yesterday with John’s quandary.

2 When John, who was in prison, heard about the deeds of the Messiah, he sent his disciples 3 to ask him, “Are you the one who is to come, or should we expect someone else?”

It’s a fascinating question. It wasn’t that John was thinking, “I haven’t heard much about cousin Jesus in a while. I should check in for an update.” No, John actually “heard about the deeds of the Messiah.” He knew exactly what Jesus had been up to, which makes his message to him troubling.

“Are you the one who is to come, or should we expect someone else?”

We see Jesus response to John in today’s text, which in essence tells John what he already knew:

“Go back and report to John what you hear and see: 5 The blind receive sight, the lame walk, those who have leprosy are cleansed, the deaf hear, the dead are raised, and the good news is proclaimed to the poor. 6 Blessed is anyone who does not stumble on account of me.”

John was apparently not looking for a crusade to bring mercy and grace to the broken, outcast, poor, and otherwise marginal members of the community. I suspect John was like everyone else in that he expected a messiah to be taking names and kicking butts and expelling the Roman occupiers from the country. Remember John’s preaching about the high ways being brought down and the crooked ways made straight and the rough ways smooth? John’s understanding of a revolutionary movement had more to do with messianic might than it did mercy and compassion.

Aren’t we the same way? We have pretty clear expectations of who and what we want Jesus to be and do for us and the world in which we live. We want him to be a Republican or Democrat. We want him to be a champion for our cause and to get on board with our mission. Like just about everyone in the first century, we in the twenty-first century want Jesus to get behind our agendas. The truth? Then and now, Jesus comes to expose our agendas and to supplant them with a vision it never would have occurred to us to aspire to.  He came to reveal to us that the Kingdom of Heaven was not some kind of aspirational pie-in-the-sky idealism. Then and now, he shows us the Kingdom of Heaven is now near and present and possible for all who can pony up the faith and obedience to move accordingly.

Jesus came to bring a turn around movement alright. It’s just not the kind of turn around they were looking for. On this point we should probably ask ourselves some seriously sobering questions. 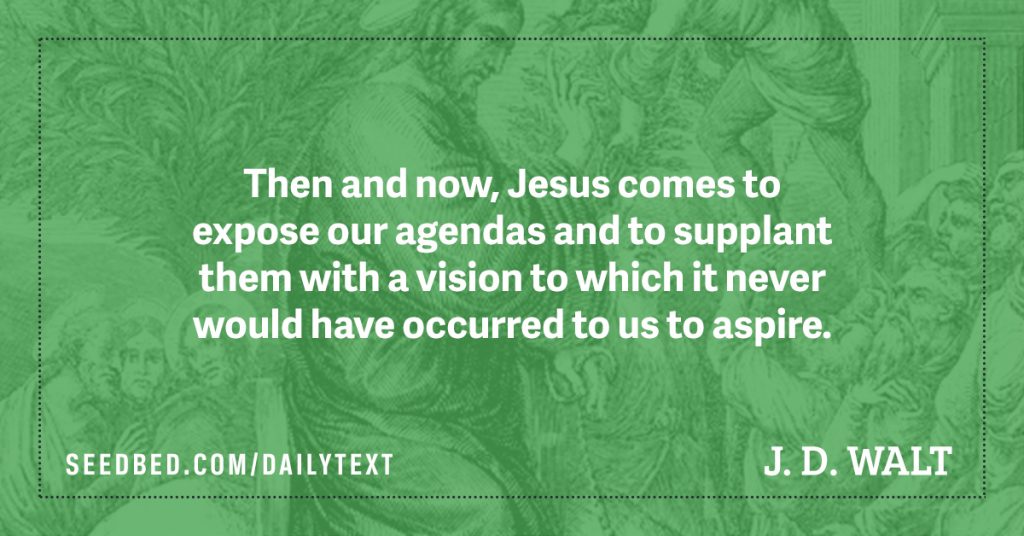 1. Then and now, people are mostly interested in personal well being and national security. How about you? Is your expectation that Jesus would be about these agendas on our behalf?

2. What if the revolutionary “turn-around” Jesus brings is that of bringing our expectations and agendas into alignment with the now-near Kingdom of Heaven. And what if that is more about others well being than it is about our own self interest?

3. Blind see. Lame walk. Deaf hear. Lepers cleansed. Dead raised. Poor hear good news. If we are honest, isn’t this the list of people we have mostly written off as unsolvable cases? What are the implications of Jesus going to these people first?