it would be better for them to have a large millstone hung around their neck and to be drowned in the depths of the sea.

I think this is the most emphatic, sober warning in all of the Bible. Yesterday, children served as an analogy. Today they are the subject. Let me translate: Jesus affirms the death penalty for those who take advantage of children. Crucifixion was the most horrific death a Jew could imagine. Jesus turns up the horror a few clicks by describing a Roman death penalty technique. Get a picture of a very large stone wheel in your mind. Now imagine that being tied onto your neck and being thrown into the sea. It’s the mafia equivalent of concrete boots.

Now get this. Jesus is saying this kind of punishment would actually be merciful compared to the kind of wrath God would unleash on such a perpetrator. It’s called hell.

When we look at this from the flip side we get a glimpse of the extraordinarily high status Jesus confers on the most vulnerable people. In essence, he seems to say if you mess with them your are messing with me. It’s the flip side of yesterday’s text, where he said, And whoever welcomes one such child in my name welcomes me.

Three things we can deduce from today’s text. Jesus loves children in an extraordinary way. And whether we like it or not, Jesus believes in hell. Finally, Jesus says there is a special place in hell reserved for those who cause children to stumble.

It strikes me to note the inverse is also true. Those who give themselves and their time and their resources to seeing after the welfare of children are doing some of the most important work in the Kingdom of God.

It doesn’t take long in reviewing the daily news to come across an image of a child suffering the horrors of war or famine or disease somewhere in the world today. It puts us in a hard place. We know we can’t solve the problem. We know we must do something. We don’t know what to do. If you are anything like me, I let my grief-stricken ire rise up and then its on to Wheel of Fortune. That’s not OK. I wonder if my omissions could be cause for their stumbling. I wonder.

Lord Jesus, thank you for the way you lifted up children and protected them and accorded them status in a world that did not. Give me eyes to see these “little ones,” not just in my neighborhood but in some of the most desolate and dark places on Earth. Even where there is seemingly nothing I can do to help, give me the courage and resolve to do something anyway. I ask this for the sake of your great name. Amen. 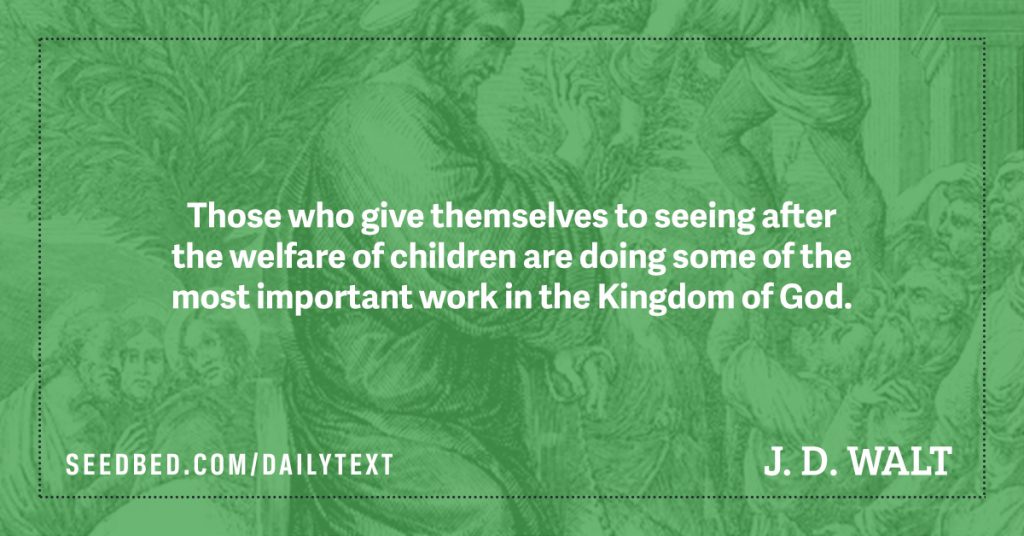 1. Have you seen images and examples lately of children throughout the world that raise your ire at evil?

2. How can we do more to protect and preserve the lives and welfare of the most vulnerable people among us who are so often children?

3. If Jesus is so emphatic about this, why aren’t we?