21 Leaving that place, Jesus withdrew to the region of Tyre and Sidon. 22 A Canaanite woman from that vicinity came to him, crying out, “Lord, Son of David, have mercy on me! My daughter is demon-possessed and suffering terribly.”

23 Jesus did not answer a word. So his disciples came to him and urged him, “Send her away, for she keeps crying out after us.”

24 He answered, “I was sent only to the lost sheep of Israel.”

26 He replied, “It is not right to take the children’s bread and toss it to the dogs.”

27 “Yes it is, Lord,” she said. “Even the dogs eat the crumbs that fall from their master’s table.”

28 Then Jesus said to her, “Woman, you have great faith! Your request is granted.” And her daughter was healed at that moment.

This is a complicated curiosity of a text. Permit me a few brief observations.

1. Matthew is writing to a Jewish audience yet he litters his text with Easter eggs pointing them beyond themselves to the larger mission Jesus came to establish. Remember the little Gentile anomalies in the genealogy in Matthew 1? Do the names Tamar and Rahab ring a bell? Yep, two Canaanite women get included in the genealogy of the Son of David. Canaanites were right up there with Samaritans on the Israel’s most hated list. Then there’s the matter of the despised Roman Centurion who came requesting healing for his son. Yes, add them to the list too. And yes, in case Matthew’s hearers stepped out for a commercial break and missed the fireworks, the woman who makes an appearance in today’s text was also—you guessed it—a Canaanite.

2. This woman had extraordinary faith; just the kind of faith Jesus was looking for. I’m not referring to her confidence in Jesus ability to heal, though that was impressive. I’m referring to her confession of his identity that his intended audience was so slow to see. “Lord, Son of David, have mercy on me! My daughter is demon-possessed and suffering terribly.” Peter gets so much press for his famous confession of the Messiah (in the next chapter), but we should remember the pagan astrologers from chapter 1 who saw Jesus for who he was and also the two blind beggars alongside the road in chapter 9. “Have mercy on us, Son of David,” they cried out. (Matthew 9:27.) Jesus came to the house of the lost sheep of Israel but it was the outsiders who first recognized him. It ‘s still that way often times. Biblical faith is far more about an accurate understanding of who Jesus is than in what he can do for you. That’s just the gravy.

3. We need to remember, Jesus was still trying to get out of town for some R & R with his disciples. He left Jewish country and headed for the region of Tyre and Sidon. He wanted a break. His reluctance to help the woman stemmed more from his attempt to be off-duty than it did from her ethnicity. Again, I think Jesus seized the moment to make a teaching moment out of this for his disciples. Just like the multitudes a few days earlier, the disciples wanted to send her away.

4. This little interplay about dogs and children and crumbs was more of a playful jab than a barbed insult. There’s a nice obvious yet hidden connection between the crumbs she references and the multiple basketfuls of crumbs picked up from the feeding of the 20,000. Yes, Jesus came first to the house of Israel, but not at all exclusively. He was bringing a kingdom of unparalleled abundance with room at the table for whoever would ultimately believe.

5. Finally, though its probably not fair to consider that Jesus considered her a dog, he gave her a profound commendation while tossing her a nice bone in the end. Then Jesus said to her, “Woman, you have great faith! Your request is granted.” And her daughter was healed at that moment.

And that’s probably a good place to stop today. 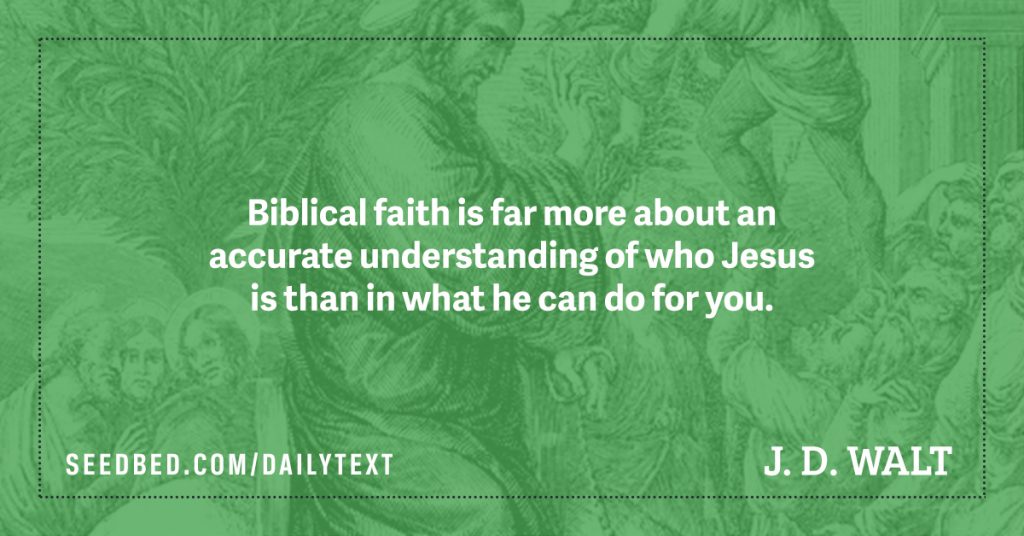 Lord Jesus, I want to know you as you truly are. I want to go deeper than what I need you to do for me. I want to press in to love you for who you are. Reveal yourself to me in a personal way. By the power of your Holy Spirit, take me into the depths of your personhood and personality. All of this I pray for the glory of your name. Amen.

1. So what insights and implications do you see from the observations above?

3. What do you think of this notion of loving Jesus for who he is and not just for what he can do for us? Are you ready to launch in the direction? It’s ever new country.