When Religion Is the Problem - Seedbed
close
Menu 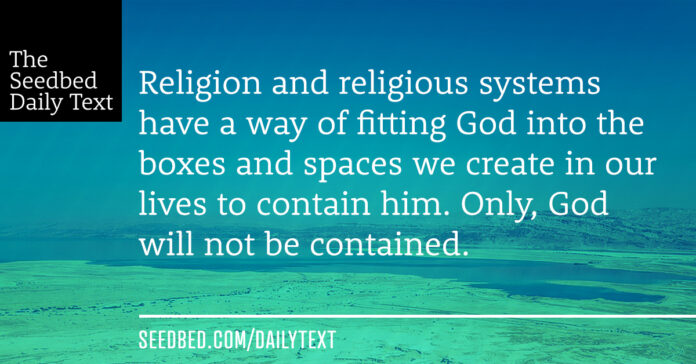 28 Then the Jewish leaders took Jesus from Caiaphas to the palace of the Roman governor. By now it was early morning, and to avoid ceremonial uncleanness they did not enter the palace, because they wanted to be able to eat the Passover.29 So Pilate came out to them and asked, “What charges are you bringing against this man?”

30 “If he were not a criminal,” they replied, “we would not have handed him over to you.”

31 Pilate said, “Take him yourselves and judge him by your own law.”

“But we have no right to execute anyone,” they objected. 32 This took place to fulfill what Jesus had said about the kind of death he was going to die.

33 Pilate then went back inside the palace, summoned Jesus and asked him, “Are you the king of the Jews?”

35 “Am I a Jew?” Pilate replied. “Your own people and chief priests handed you over to me. What is it you have done?”

36 Jesus said, “My kingdom is not of this world. If it were, my servants would fight to prevent my arrest by the Jewish leaders. But now my kingdom is from another place.”

Jesus is a problem for religious people. He is a nuisance, an irritant, in the way, a problem. He does not fit because he will not get with the program. He is a threat to the status quo not because of anything he does but by the sheer fact of being who he is. This is why the seven I AM declarations of Jesus figure so prominently in John’s Gospel.

Religious people want Jesus to fit into and serve their religion, which is to say the particular set of beliefs, values, practices and programs they turn to to bring order to their chaos, make sense of their existence and otherwise enhance their lives. Religion and religious systems have a way of fitting God into the boxes and spaces we create in our lives to contain him—only God will not be contained.

We see this at work in one of the supreme ironies in Scripture in today’s text.

28 Then the Jewish leaders took Jesus from Caiaphas to the palace of the Roman governor. By now it was early morning, and to avoid ceremonial uncleanness they did not enter the palace, because they wanted to be able to eat the Passover.

It didn’t start this way. It never does. We are talking about the Passover for crying out loud—which prior to the resurrection of Jesus was the single most cataclysmic, defining event in the history of the world. The miraculous deliverance of the households marked by the blood of the lamb. The enormity of Egyptian agony over the defeat of Pharaoh and the death of the first born. The frantic panicked escape in the middle of the night only to meet their apparent end with their backs against the wall of the sea.

By now it was early morning, and to avoid ceremonial uncleanness they did not enter the palace, because they wanted to be able to eat the Passover.

Sometimes, in order to have a nice Passover party we need to get Jesus out of the way.

Sometimes profundity can only be expressed through profanity. It’s why I’m stopping now. This is one of those times.

Abba Father, thank you for your son, Jesus, who is not only our Passover, but who is THE PASSOVER. Deliver us from the vanity of our rites and rituals that we might be awakened to the vileness in our souls which led to the violence of the Cross. We pray in Jesus name. Amen.

1. How does this strike you—dispensing with Jesus in order to get to the Passover celebration? Can you see how our own religious ceremony can actually obscure Jesus?

2. Has faith become a project for you? A life-enhancement or self-improvement program? What will it take to break free from this?

3. Has church and the way you “do church” become something of a box or compartment for God in your life? What can be done about this?

© Seedbed 2021
When Religion Is the Problem
MORE STORIES