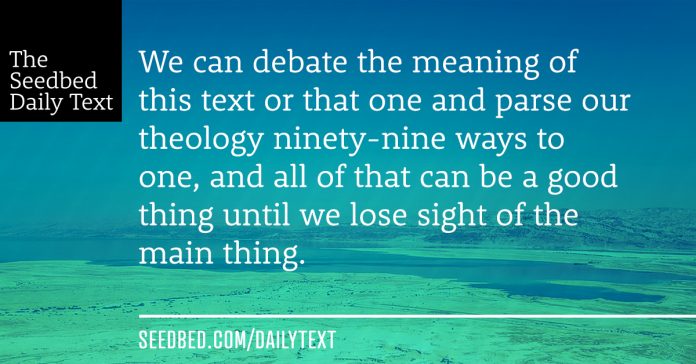 A second time they summoned the man who had been blind. “Give glory to God by telling the truth,” they said. “We know this man is a sinner.”

He replied, “Whether he is a sinner or not, I don’t know. One thing I do know. I was blind but now I see!”

Then they asked him, “What did he do to you? How did he open your eyes?”

He answered, “I have told you already and you did not listen. Why do you want to hear it again? Do you want to become his disciples too?”

Then they hurled insults at him and said, “You are this fellow’s disciple! We are disciples of Moses! We know that God spoke to Moses, but as for this fellow, we don’t even know where he comes from.”

The man answered, “Now that is remarkable! You don’t know where he comes from, yet he opened my eyes. We know that God does not listen to sinners. He listens to the godly person who does his will. Nobody has ever heard of opening the eyes of a man born blind. If this man were not from God, he could do nothing.”

To this they replied, “You were steeped in sin at birth; how dare you lecture us!” And they threw him out.

They will not stop. Their power has been challenged to the core by one of the most marginalized people in town. A blind beggar holds court with the religious leaders of the nation. They brought him in for questioning and he winds up interrogating them. He even has the audacity to say to them, “Do you want to become his disciples too?”

This is a picture of catastrophic reversal. Now the blind man lectures the teachers.

We know that God does not listen to sinners. He listens to the godly person who does his will.

Sin theology abounds in this story. Remember how it began? “Who sinned, this man or his parents?” If you will trace it through it goes all the way to the end.

Jesus is not bringing more sin theology. To be sure, he takes sin quite seriously, but he does not allow sin to set the frame. Jesus brings the theology of grace. Recall the conventional theology of the day. “We know that God does not listen to sinners. He listens to the godly person who does his will.” Now consider what just happened. Jesus, a.k.a. God, listened to a sinner, the blind man and lavished grace upon him. Jesus might reframe it like this: “We know that God only listens to sinners, and he transforms them by grace into godly people who do his will.”

In the midst of all these social subplots and heated theological debates, we can easily forget what the whole thing is about. It can be like that all too often for us Christians. We can debate the meaning of this text or that one and parse our theology ninety-nine ways to one, and all of that can be a good thing until we lose sight of the main thing. So what is the main thing? The man formerly known as the blind man said it best:

He replied, “Whether he is a sinner or not, I don’t know. One thing I do know. I was blind but now I see!”

Abba Father, we thank you for your Son, Jesus, who disarms our defenses, cuts through our pretense, arrests our avoidance tactics, and takes us to the place of our real testimony. Come, Holy Spirit, and deepen our own experience of grace that we might stand with the blind beggar and tell the truth, even in the face of great opposition. We pray in Jesus’ name, amen.

1. Do you see how Jesus will not allow the conversation to be framed by sin but instead frames it by grace? What difference does this make?

2. Would you say that you are more aware of the power of sin or the power of the grace of God in Jesus Christ? How might this change?