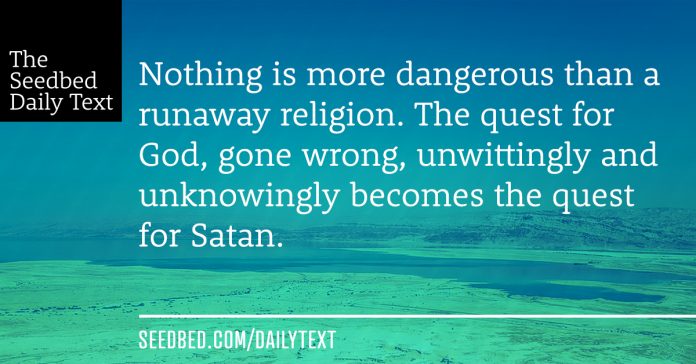 “Abraham is our father,” they answered.

“If you were Abraham’s children,” said Jesus, “then you would do what Abraham did. As it is, you are looking for a way to kill me, a man who has told you the truth that I heard from God. Abraham did not do such things. You are doing the works of your own father.”

“We are not illegitimate children,” they protested. “The only Father we have is God himself.”

Jesus said to them, “If God were your Father, you would love me, for I have come here from God. I have not come on my own; God sent me. Why is my language not clear to you? Because you are unable to hear what I say. You belong to your father, the devil, and you want to carry out your father’s desires. He was a murderer from the beginning, not holding to the truth, for there is no truth in him. When he lies, he speaks his native language, for he is a liar and the father of lies. Yet because I tell the truth, you do not believe me! Can any of you prove me guilty of sin? If I am telling the truth, why don’t you believe me? Whoever belongs to God hears what God says. The reason you do not hear is that you do not belong to God.”

If he hadn’t done it already, we can be sure Jesus just crossed the line with “the Jews” (shorthand for those claiming to speak for God’s people—see verse 13):

You belong to your father, the devil, and you want to carry out your father’s desires. He was a murderer from the beginning, not holding to the truth, for there is no truth in him. When he lies, he speaks his native language, for he is a liar and the father of lies.

After multiple signs, multiple sermons, and multiple conversations, they still don’t get it. At times he thinks they are grasping it, yet every time they turn on him in another way. Now Jesus reads them the riot act.

Insiders rarely recognize it when their religion goes off the rails. It’s obvious only in hindsight. From the outside the trains seem to be running right on time. The problem is the new destination. They won’t know it until it’s too late. That’s why God sends prophets to warn the people. Nothing is more dangerous than a runaway religion. The quest for God, gone wrong, unwittingly and unknowingly becomes the quest for Satan. Good, God-fearing, misguided people will readily do evil in God’s name and have no idea of it.

Lest we too readily summon those radical Islamic terrorists to the stand, we need only look in our own rearview mirror to expose our own train wreck. Does the American slavery project ring a bell? We appealed to the Old Testament to deny the humanity of an entire race of people and we cited the New Testament to keep them in line. After all, the Bible does say, “Slaves obey your masters,” doesn’t it?

Yes, indeed, the followers of Jesus can as readily become the spawn of Satan as did the children of Abraham. Doing the work of Satan in the name of God has a long history, and unless we remember it regularly, we will be among those who are destined to repeat it.

Abba Father, we thank you for your Son, Jesus, who is our Prophet, Priest, and King. Save us from the self-deception of thinking we are beyond self-deception. Lead us not into temptation and deliver us from evil. We want to know you, the Truth, who alone can set us free. We pray in Jesus’ name, amen.

1. How do you react to Jesus calling the Pharisees the spawn of Satan in this instance? Why did he do that?

2. Can you think of other examples where well-intentioned people did great wrong in the name of God? In the name of Jesus even?

3. How do we guard against such things happening in our own time?

Join us for our weekly fast every Wednesday. Try the Fasting Challenge Course. Register here.