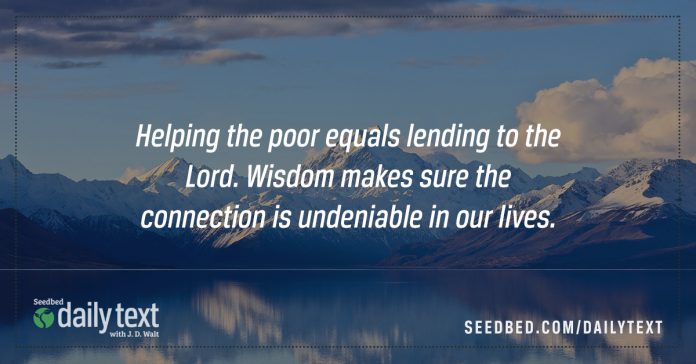 Whoever is kind to the poor lends to the Lord, and he will reward them for what they have done.

On the one hand, Proverbs seems to say in many places that people become poor because of unwise decisions (foolishness, folly, laziness, not responsive to correction, etc.). On the other hand, a clear characteristic of wise people is the way they handle and help the poor.

It’s a bit of a conundrum. It seems the wise help those who make unwise decisions. Let’s be clear. Just because a person is poor does not mean they have made unwise choices. In fact, this is a point of deep Holy Spirit inspired self examination for many of us. Those of us who are not poor tend to approach the poor with the prejudgment that they somehow deserve to be poor because of their unwise decisions. “It’s their own fault,” we tell ourselves, in an effort to excuse ourselves from helping them. “Get a job!” we want to tell them.

Proverbs shows us what wisdom looks like when it comes to the poor.

Regardless of why people find themselves in poverty, it is a horribly unkind reality. Everything conspires against the poor and seemingly everyone. From today’s chapter we see this:

The poor are shunned by all their relatives—how much more do their friends avoid them! Though the poor pursue them with pleading, they are nowhere to be found. v.7

In other words, financial poverty creates the downward spiraling dynamics of familial poverty, relational poverty, emotional poverty, physical poverty and on it goes. Poverty is a diabolical reality, and to the extent we judge the poor for their poverty we perpetuate the cycle.

At the same time, do we continue to pour water into a leaking bucket? One can argue that giving money to the poor can also perpetuate the cycle.

What are we to do? It’s a terribly complex problem.

Proverbs give us guidance. For instance, it says we probably shouldn’t co-sign on any debts. Today’s text couldn’t be more clear though:

Whoever is kind to the poor lends to the Lord, and he will reward them for what they have done.

We will do well to remember: Jesus is poor. He translates the passage like this:

“The King will reply, ‘Truly I tell you, whatever you did for one of the least of these brothers and sisters of mine, you did for me.’ Matthew 25.

Abba Father, you are the King of Heaven and Earth. All wealth is yours, yet you chose to come to us in the form of a Jewish peasant, who had nowhere to lay his head, who was born in a manger and buried in a borrowed tomb. Your mercy is truly a marvel. Fill us with this wisdom to know that lending to the poor is lending to you. We pray in Jesus name. Amen.

1. Why do we so readily justify ourselves for not giving to people to ask for our help? (And call it wisdom).

2. What if I began to lend to the poor without expectation of repayment? What would that do to me?

3. How might I learn to imagine the face of Jesus in the face of the poor? How would that change things? For them? For me?