When You Know You Are Not Enough - Seedbed
close
Menu 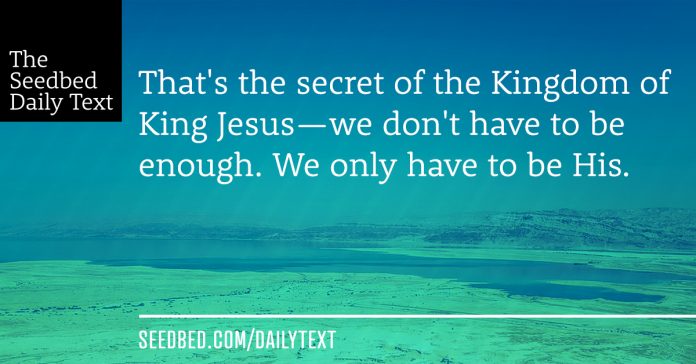 Philip answered him, “It would take more than half a year’s wages to buy enough bread for each one to have a bite!”

Another of his disciples, Andrew, Simon Peter’s brother, spoke up, “Here is a boy with five small barley loaves and two small fish, but how far will they go among so many?”

Jesus said, “Have the people sit down.” There was plenty of grass in that place, and they sat down (about five thousand men were there). Jesus then took the loaves, gave thanks, and distributed to those who were seated as much as they wanted. He did the same with the fish.

When they had all had enough to eat, he said to his disciples, “Gather the pieces that are left over. Let nothing be wasted.” So they gathered them and filled twelve baskets with the pieces of the five barley loaves left over by those who had eaten.

After the people saw the sign Jesus performed, they began to say, “Surely this is the Prophet who is to come into the world.” Jesus, knowing that they intended to come and make him king by force, withdrew again to a mountain by himself.

Now to the sign. Philip tells Jesus it would cost half a year’s wages to even serve these people Communion (i.e., for each one to have a bite!), much less serve them a meal.

While Philip was whining, Andrew went into action and came up with up with a whopping five loaves and two fishes—hardly a bag of groceries.

Now it was Jesus’ turn. He received the meager rations, blessed them, and multiplied them until, we are told, all had eaten “as much as they wanted.”In case it wasn’t clear to us that this wasn’t a mere appetizer, we are told again, “they had all had enough to eat.”

What a sign! It’s a picture of how Jesus can take something limited and make it unlimited. He can take scarcity and turn it into abundance. He can take not nearly enough and make it more than enough. Five barley loaves and two fishes fed somewhere around ten thousand people (including women and children). The only thing more absurd than Jesus asking Philip how to feed all these people was Jesus actually feeding all these people.

I wonder what Philip thought about this. I’ll chance a guess. I bet he was pondering, If Jesus can do this with loaves and fishes, imagine what he could do with my life.

That’s the secret of the kingdom of King Jesus. We don’t have to be enough. We only have to be his. In the hands of Jesus, our lives can all at once be profoundly limited and more than enough. That’s how I feel about the Daily Text. It’s loaves and fishes all over again. We are now over two thousand days into what I knew and still know to be an impossible task. I am an exquisite portrait of extraordinary limitation—less than five loaves and two fish. You number in the tens of thousands. Jesus is more than enough. I boast only in the cross! Paul’s word to the Ephesians comes to mind,

Now to him who is able to do immeasurably more than all we ask or imagine, according to his power that is at work within us,  to him be glory in the church and in Christ Jesus throughout all generations, for ever and ever! Amen. (Eph. 3:21-22)

Abba Father, thank you for your Son, Jesus, who is immeasurably more than all we could ever ask or imagine. He is the loaves and fishes by which you have loved the whole world and in whom all who will believe can be saved. Come, Holy Spirit, and stretch our belief beyond our paltry limitations and into the shape of God’s possibilities for our lives to bless others. We pray in Jesus’ name, amen.

2. Do you tend to be more of a scarcity person or an abundance person? Why is that?

3. How, practically speaking, can you grow more and more into an abundance person?

© Seedbed 2021
When You Know You Are Not Enough
MORE STORIES