Early in the morning, all the chief priests and the elders of the people made their plans how to have Jesus executed. 2 So they bound him, led him away and handed him over to Pilate the governor.

3 When Judas, who had betrayed him, saw that Jesus was condemned, he was seized with remorse and returned the thirty pieces of silver to the chief priests and the elders. 4 “I have sinned,” he said, “for I have betrayed innocent blood.”

“What is that to us?” they replied. “That’s your responsibility.”

5 So Judas threw the money into the temple and left. Then he went away and hanged himself.

6 The chief priests picked up the coins and said, “It is against the law to put this into the treasury, since it is blood money.” 7 So they decided to use the money to buy the potter’s field as a burial place for foreigners. 8 That is why it has been called the Field of Blood to this day. 9 Then what was spoken by Jeremiah the prophet was fulfilled: “They took the thirty pieces of silver, the price set on him by the people of Israel, 10 and they used them to buy the potter’s field, as the Lord commanded me.”

It may be the saddest verse in all the Bible.

So Judas threw the money into the temple and left. Then he went away and hanged himself.

What would have happened if Judas had not committed suicide? He was clearly repentant of his betrayal of Jesus. He returned to the appointed leaders with his heartfelt confession.

“I have sinned,” he said, “for I have betrayed innocent blood.”

13 When you were dead in your sins and in the uncircumcision of your flesh, God made you alive with Christ. He forgave us all our sins, 14 having canceled the charge of our legal indebtedness, which stood against us and condemned us; he has taken it away, nailing it to the cross. 15 And having disarmed the powers and authorities, he made a public spectacle of them, triumphing over them by the cross. Colossians 2:13-15.

Because we cannot make restitution for ourselves, Jesus made restitution for us. We need only turn to Jesus. Our irreconcilable account statement is nailed to the Cross and marked “Reconciled.” Until we can accept and receive this act done on our behalf we are doomed to one of two possible responses. We will either work tirelessly to pay back a debt that cannot be repaid, or we will run from it—even to the point of convincing ourselves there is no debt. The former is often a well intentioned effort at repentance through the worship of a false god and the pursuit of a distorted religion. The latter is rebellion. Both are forms of enslavement.

There is a third possible response: suicide. Suicide is a horrifically misguided attempt at repentance—at turning away from one’s broken self. Unfortunately it happens through turning in on oneself. It is an attempt to cancel one’s debt by cancelling their life. It is a merciless form of self-inflicted judgment. It most often comes after a protracted suffering from a diseased mind. Sometimes the genesis of a diseased mind is genetic. Other times mental illness comes from some untreated traumatic event in one’s earlier or present life. Often it is a combination of both.

A diseased mind creates a vicious cycle of irreconcilable self-hatred—conscious or unconscious. From those suffering clinical depression to veterans of war to victims of sexual abuse or cyber bullying and on we could go, suicide happens when a person can see no way of progressing forward and rather than regressing further they choose to turn away from it all by ending it all. It is the ultimate human tragedy.

So is suicide an unforgivable sin? I don’t see that in Scripture. Would Jesus have forgiven Judas for betraying him? Of course he would have. Judas could not get to Jesus to seek reconciliation with him. Judas went to the only place he knew to go for redemption—to the Temple—and he was condemned and cast out. I sometimes wonder what would have happened if they had embraced him.

Will we see Judas in the New Creation? If I know Jesus like I think I know Jesus, I expect Judas to be there. We serve a God who through his death descended to the dead to set captives free and who rose from the dead to bring them to life. I just don’t see suicide as a sin to be forgiven as much as it is a terminal illness to be healed.

Judas tried to repent. I think in one way or another, everyone who kills themselves is trying to repent. In a final misguided and distorted effort to turn away from their darkness they turn on themselves.

Let’s be clear. I do believe there is and will be a real Hell. I just don’t think there’s a place reserved there for people who kill themselves. They have surely had hell enough on earth.

Father, there are some reading this who are right now caught in the depths of a darkness leading them to attempt to end their lives. There are likely many more reading who have lost a loved one to suicide, and some of them blame themselves for not somehow doing more to save them. Release them from this. We pray for your limitless mercy to touch all these situations with healing, with redemption, with comfort and with peace. Only you can do that. Going forward, we ask you to infuse in us the kind of supernatural love that has the capacity to embrace others in ways that cause them to embrace you and so embrace themselves. Come Holy Spirit and gift your church with miraculous gifts to heal the impossible situations of mental illness all around us. In Jesus name, Amen. 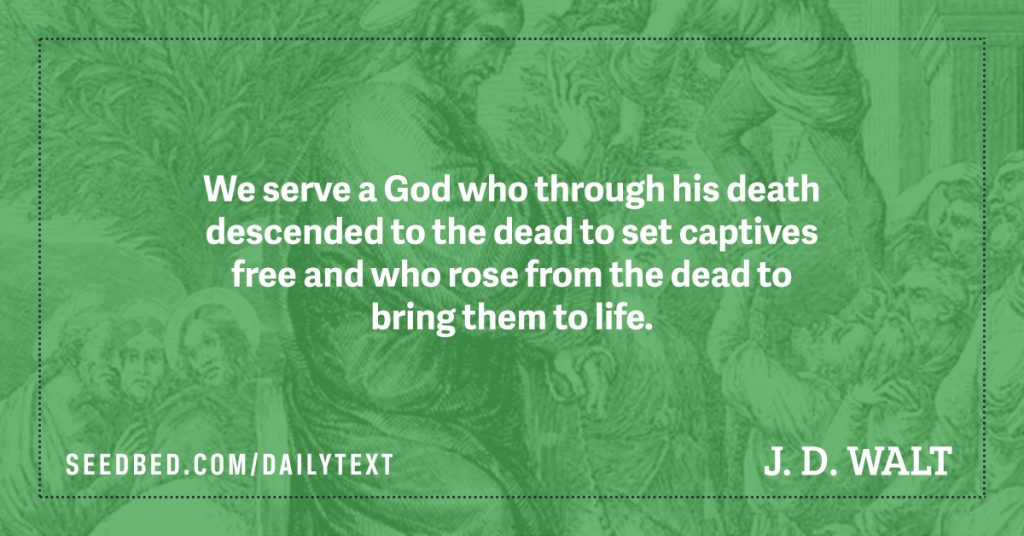 1. What’s your reflection on Judas attempted confession and repentance and the way he was handled by the religious leaders?

2. About suicide. Does today’s post at all align with what you have experienced with anyone you have known who has committed suicide?

3. Are there people in your life right now who are living in the suicide zone? What might it look like to embrace them in a new way?