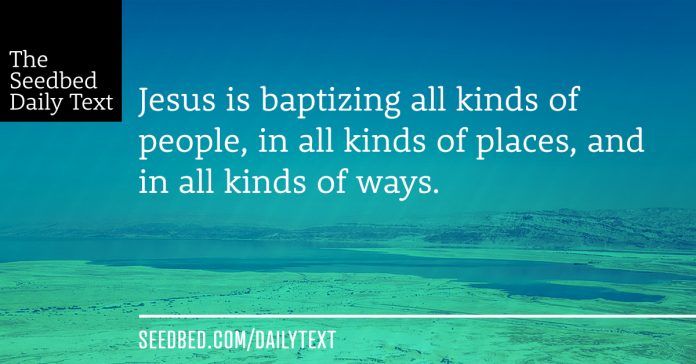 After this, Jesus and his disciples went out into the Judean countryside, where he spent some time with them, and baptized. Now John also was baptizing at Aenon near Salim, because there was plenty of water, and people were coming and being baptized. (This was before John was put in prison.) An argument developed between some of John’s disciples and a certain Jew over the matter of ceremonial washing. They came to John and said to him, “Rabbi, that man who was with you on the other side of the Jordan—the one you testified about—look, he is baptizing, and everyone is going to him.”

To this John replied, “A person can receive only what is given them from heaven. You yourselves can testify that I said, ‘I am not the Messiah but am sent ahead of him.’ The bride belongs to the bridegroom. The friend who attends the bridegroom waits and listens for him, and is full of joy when he hears the bridegroom’s voice. That joy is mine, and it is now complete. He must become greater; I must become less.”

John is doing the most significant work in the world. He’s the forerunner of the Son of God for crying out loud. The gospel of the kingdom of God now unfolds before his very eyes. He is, in essence, the first proclaimer of it all. And we get this:

An argument developed between some of John’s disciples and a certain Jew over the matter of ceremonial washing.

What?! Arguments over ceremonial washing?! I’m not sure who I would rather not be, John’s disciples or that “certain Jew.” We all know it’s true though. Anyone who breaks free from the status quo of nominal faith will sooner or later find themselves surrounded by the likes of John’s disciples and certain other characters who have become masters of majoring on the minors. They love to play gotcha with the ceremonial-washing policy manual.

They came to John and said to him, “Rabbi, that man who was with you on the other side of the Jordan—the one you testified about—look, he is baptizing, and everyone is going to him.”

To them, Jesus is only known as “that man who was with you on the other side of the Jordan.” They were John’s disciples and they had completely missed the point of his life’s work.

Don’t get me wrong, these weren’t the bad guys. While they understood themselves to be all about God, somewhere along the way they took a wrong turn and detoured into an adventure in missing the point. They saw Jesus as the competition. Their T-shirts said, “We must become more. He must become less.”

Sometimes we can be so committed to the mission of God that we miss the actual message of the gospel. Not John—

The bride belongs to the bridegroom.

The bride never did and never will belong to this organization or that ministry or the church down the street. The bride belongs to the bridegroom. It seems obvious to say, until I am confronted by my own misguided competitive spirit. Jesus is baptizing all kinds of people, in all kinds of places, and in all kinds of ways. Why do I find it so easy to take issue with those places and people where Jesus is clearly baptizing more with them than with me? What if I really believed John on this point:

To this John replied, “A person can receive only what is given them from heaven.”

Do I really believe that? Or do I think I can take the hill for Jesus without Jesus—because that’s what it really comes down to, doesn’t it? When it comes down to my follower counts against theirs (a.k.a. vanity metrics), I must come to grips that I have lost the scent of the real Jesus.

Jesus is not looking for employees. He’s not after servants. He’s enlisting friends. John got it.

The friend who attends the bridegroom waits and listens for him, and is full of joy when he hears the bridegroom’s voice. That joy is mine, and it is now complete.

It’s all about the bridegroom—being his friend, listening to his voice.

And, always remind me, friends don’t let friends get hung up on the ceremonial-washing policy manual, especially when it’s time for the big game.

Abba Father, thank you for your Son, Jesus, the Bridegroom, who counts all who follow him as friends. Deliver us from the pettiness of so many small distractions, and so many big ones. Free us for the joy of following Jesus as we are filled with the Holy Spirit. In Jesus’ name we pray, amen.

1. How do you see the difference between working for Jesus and belonging to him?

2. What might it look like today to be a friend of the bridegroom who waits and listens for him?

3. How can we humbly, graciously, and yet firmly deal with the heel-biting, policy-manual people who are completely missing the point?

P.S. If you’re a pastor, we have a bit of a roadmap for the months ahead that we want to share with you. Perhaps it will help with some planning in this unpredictable COVID season. Let us know here.