“For the kingdom of heaven is like a landowner who went out early in the morning to hire workers for his vineyard. 2 He agreed to pay them a denarius for the day and sent them into his vineyard.

3 “About nine in the morning he went out and saw others standing in the marketplace doing nothing. 4 He told them, ‘You also go and work in my vineyard, and I will pay you whatever is right.’ 5 So they went.

7 “‘Because no one has hired us,’ they answered.

“He said to them, ‘You also go and work in my vineyard.’

8 “When evening came, the owner of the vineyard said to his foreman, ‘Call the workers and pay them their wages, beginning with the last ones hired and going on to the first.’

13 “But he answered one of them, ‘I am not being unfair to you, friend. Didn’t you agree to work for a denarius? 14 Take your pay and go. I want to give the one who was hired last the same as I gave you. 15 Don’t I have the right to do what I want with my own money? Or are you envious because I am generous?’

‘Why have you been standing here all day long doing nothing?’

Pay close attention to the answer.

“‘Because no one has hired us,’ they answered.

Is it fair that this guy showed up to work in the morning and was passed over all day long? Maybe he was handicapped. Maybe he was elderly? Maybe he didn’t measure up? Maybe he wasn’t as strong as the other candidates? None of that mattered to the landowner.

That’s what God is like. Thankfully, he’s about so much more than fairness. 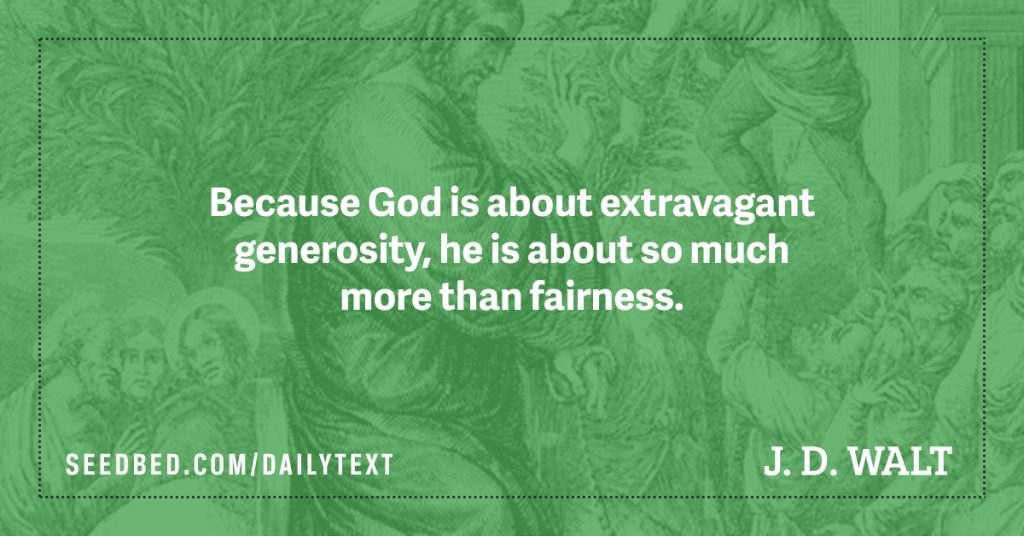 Almighty God, you are a good, good Father. You cause the sun to shine on the just and on the unjust. You reward people according to your goodness and not according to theirs. Help us to get our eyes off of ourselves and save us from all of our comparison with our neighbors. Help us to see you and to be glad for the equality of your grace—that you don’t play favorites yet you favor the underdog. Thank you. In Jesus name, Amen.

1. Why do we struggle with fairness?

2. If your child stayed up all night for a week to do a project for school and received an A and another kid put it off until the last night and turned in a project clearly inferior to your child’s and got the same A—would that offend you? Why?