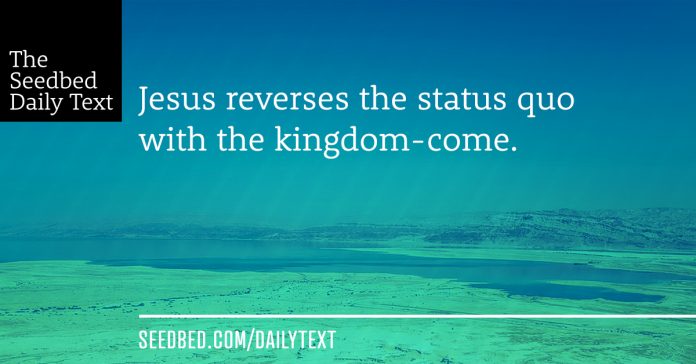 The day on which this took place was a Sabbath, and so the Jewish leaders said to the man who had been healed, “It is the Sabbath; the law forbids you to carry your mat.”

But he replied, “The man who made me well said to me, ‘Pick up your mat and walk.’ ”

So they asked him, “Who is this fellow who told you to pick it up and walk?”

The man who was healed had no idea who it was, for Jesus had slipped away into the crowd that was there.

Later Jesus found him at the temple and said to him, “See, you are well again. Stop sinning or something worse may happen to you.” The man went away and told the Jewish leaders that it was Jesus who had made him well.

What a remarkable contrast we see in this story. I find it noteworthy that we can get two completely disparate headlines. The Galilean Gazette might write, “Miracle Worker Heals Paraplegic Beggar.” The Jerusalem Journal, on the other hand, might frame it something like, “Sabbath Breaker Identified as Notorious Bethesda Beggar.” Same event—two completely different stories—and here’s the kicker: both of them are true.

Then there’s the story of the gang down at the pool. They be like, “Lame Bro Hits the Lottery after Thirty-Eight Years of Playing!” How about the story told by the man healed? “He touched me. Okay, he didn’t touch me, but I’m healed and I’m not sure who he even is.”

The sensational story is not that the man was miraculously healed. People apparently received some form of healing from that pool every day. The sensation is that God, in the person of Jesus Messiah, healed him. The scandal was not Sabbath-breaking. The scandal was Sabbath breaking out. Here’s the scandal: Why weren’t these broken men at the temple? The establishment had no use for them. The scandal? The temple, in the person of Jesus Christ, visited them. This is the sign.

The sensational, scandalous sign? God goes to the temple only to ransack it. God goes to the most impossible and unconventional places to set up the temple; or better said, to tabernacle. The sign is reversal: the bringing down of the so-called righteous and the raising up of the so-called rejects. Down with the proud and up with the humble. Jesus reverses the status quo with kingdom-come.

Here’s something to think about. Have we recreated the temple complex in our churches? Or is the tabernacle moving us out into places where the kingdom of Jesus longs to come?

How about our own lives? Temple complex or tabernacle movement?

Abba Father, thank you for your Son, Jesus, the Word made flesh who tabernacled and tabernacles among us. Come, Holy Spirit, and make us as persons and as a people to become the tabernacling of Jesus in the world. Help us to fathom what that could be like. We pray in Jesus’ name, amen.

1. What headline would you write over the story in the text the last couple of days?

2. Why do religious authorities and their brood so resist and even attack the unlikely, unexpected, and unconventional work of Jesus still today?

3. What about this temple vs. tabernacle contrast? See it in your church? In your life? Can you recall a church who truly tabernacled out in the world? How about a person or family?