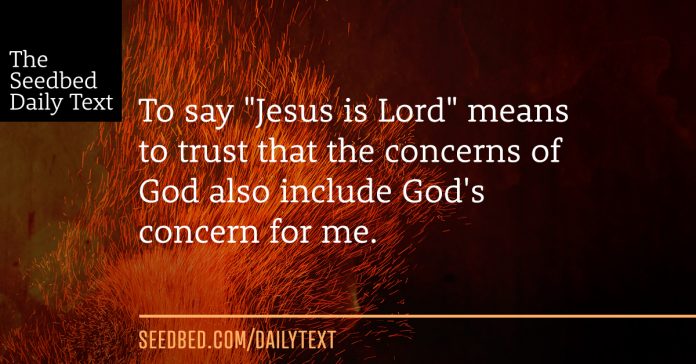 27 Jesus and his disciples went on to the villages around Caesarea Philippi. On the way he asked them, “Who do people say I am?”

28 They replied, “Some say John the Baptist; others say Elijah; and still others, one of the prophets.”

Peter answered, “You are the Messiah.”

30 Jesus warned them not to tell anyone about him.

31 He then began to teach them that the Son of Man must suffer many things and be rejected by the elders, the chief priests and the teachers of the law, and that he must be killed and after three days rise again. 32 He spoke plainly about this, and Peter took him aside and began to rebuke him.

33 But when Jesus turned and looked at his disciples, he rebuked Peter. “Get behind me, Satan!” he said. “You do not have in mind the concerns of God, but merely human concerns.”

127. There are human concerns and then there are the concerns of God. We humans are concerned about so many things and surely God must be concerned with some of the things that concern us. I suspect, however, God is not concerned with many of the things that concern us. In fact, many things we concern ourselves with can choke out the life of God in us. Remember the parable of the sower and the seed that fell in the thorny ground?

And others are those sown among the thorns: these are the ones who hear the word,  but the cares of the world, and the lure of wealth, and the desire for other things come in and choke the word, and it yields nothing. Mark 4:18-19.

Today’s text sheds some light on at least a couple of the concerns of God. First, God is concerned with our knowing Jesus Christ and who he is. He wants us to “get it” not like an answer on a test but as a deeply personal relationship. “You are the Messiah.” It’s one thing to say Jesus is God, which is accurate. It takes it a step further to say God is Jesus.

Second, he wants us to get the way God works and accomplishes his purposes in the world. Remember Isaiah– the text running alongside Mark’s story telling? Isaiah put it this way:

128. Peter was not thinking this way. He was holding on to the Israeli Dream– the restoration of the Kingdom to Israel– Republican rule- or Democratic if you see it that way. Because he thought he knew how the future should unfold and the role Jesus would play, he tried to veto the plan Jesus put forward. Jesus responded pretty sternly,“Get behind me, Satan!” he said. “You do not have in mind the concerns of God, but merely human concerns.”

129. The plans of God will often make no sense to us. And the more confident we are in our own conflicting plans the greater will seem the absurdity. My own life bears this out in a small way. I spent the better part of a decade preparing for a career in public service. I earned degrees in Public Administration and Law, passed the BAR exam and went to work. I served on the staff of my then Senator, David Pryor, in Washington, D.C. Then the itinerary changed. I began to discern a calling to full time work in the church. I was not having it! I suspect my early reactions to this change in direction had something of the effect of “rebuking Jesus.”

I’m still learning along the way the meaning of saying, “You are the Messiah.” It’s another way of saying yours is the Kingdom. It’s shorthand for, “your way is higher, better, and truer. To say, “You are the Messiah,” means saying something like, “I am no longer my own but yours.” It’s the ultimate pledge of trust and promise of obedience. It means to trust that the concerns of God also include God’s concern for me.”You are the Messiah.” It must come to  mean more every time we say it. Let that be our concern today.

Perhaps our problem is we don’t yet fully understand that to say Jesus is THE MESSIAH is not enough. We must also declare and demonstrate, “Jesus is MY LORD.” I can see Jesus as THE MESSIAH and still subject him to my agenda. When I submit to Jesus as MY LORD, my agenda must be exchanged for his.

Spirit of the Living God, fall afresh on me. Lord Jesus, you are the Messiah and you are my Lord. Reveal to me those ways that I still hold you at a distance and so resist the totalizing claim you have on my life. Show me what your Lordship means in my life from the smallest thing to the largest. Melt me. Mold me. Fill me. Use me. For the glory of your name, Jesus. Amen.

Where are you in the journey of moving from Jesus is THE MESSIAH to Jesus is MY LORD? What is the next step?