Why Jesus May Not Value Your Family Values - Seedbed
close
Menu

You will remember yesterday we talked about the dilemma of dealing with biblical texts that seem unreasonable or unrealistic or down right out of kilter with who we understand God to be. Today we see another of these kinds of texts.

Did Jesus really come to destroy families; turning them against one another? Didn’t God say something in commandment #5 about honoring one’s parents? And didn’t Jesus say something a few chapters back about peacemakers being called blessed and known as the sons and daughters of God? So what does it mean when he says, “a man’s enemies will be the members of his own household.”

Remember the context. We are working through a passage where Jesus is preparing his disciples to enter a very complex and challenging mission. Do the words, “sheep among wolves” ring a bell? He’s talking about God’s people here; the people of Israel—more specifically, “the lost sheep of Israel.” This was not just a few stray lambs. The whole nation was lost. The problem was many of them, unfortunately most of them leaders, didn’t know they were lost. In fact, they were vehemently certain they were on precisely the right course.

Now imagine this likely scenario. Peter, James and John show up in the synagogue of one of these towns. After the service they begin ministering to the sick and oppressed people outside. A lot of people begin to respond to their teaching about the “now near Kingdom of Heaven.” Miracles happen. They become followers of Jesus. So far so good, right? And then they go back home to share the good news with their family. This new thing would not have sounded like good news to the devoutly lost people of Israel. They would immediately be thrown into conflict—conflict with parents, children, in-laws, religious leaders and so forth.

Do you see how in this instance, the Word of God (who is Jesus) has become a sharp point of division within a family system (i.e. a sword)? Don’t think this still happens today? Watch what happens in a Muslim family when someone starts to follow Jesus. In many parts of the world they have to flee for their life. Even in America it results in severe conflict and often separation. Sometimes family values can be the problem.

One final point today. The most interesting and often surprising way we see this happen in our neighborhoods is when a person from a nominally Christian family becomes an awakened and truly devoted follower of Jesus. The family often comes against this, wondering who gave them the cool-aid. Sometimes this will result in the whole family eventually coming to follow Jesus. Other times it leads to a rift that never heals.

The fact of the matter? The bonds of the Gospel of Jesus Christ are stronger and infinitely more lasting than family ties—as important as family ties are. Jesus comes to bring the families of the earth into the family of God. Sometimes it will create division within families. It just will. The upside of this is it creates the kind of division that inevitably leads to people having to make a decision about Jesus. 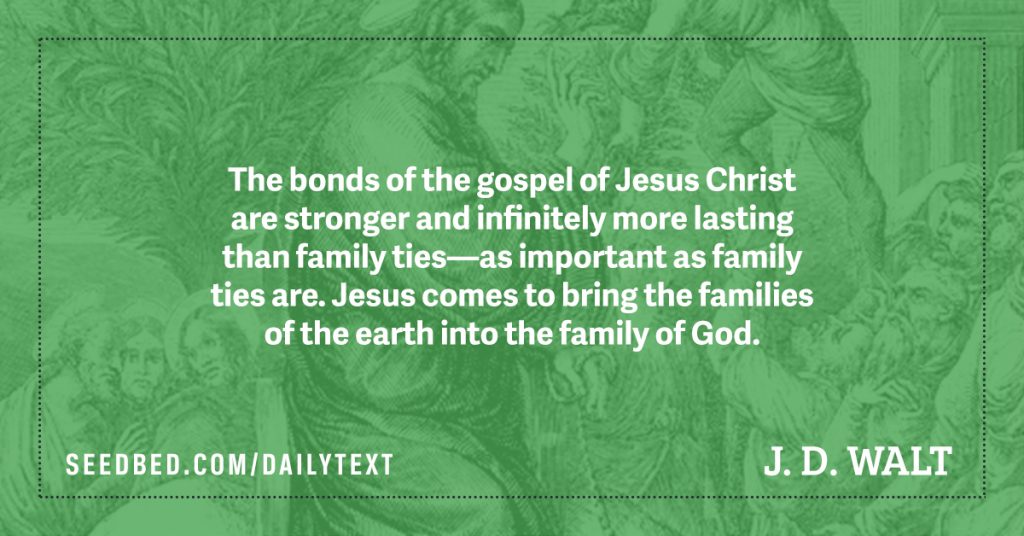 1. Have you seen the scenario I just described happen before—where a person was ostracized or criticized or even exiled from their family because of their faith in Jesus?

2. Why is the Gospel so offensive and at times divisive?