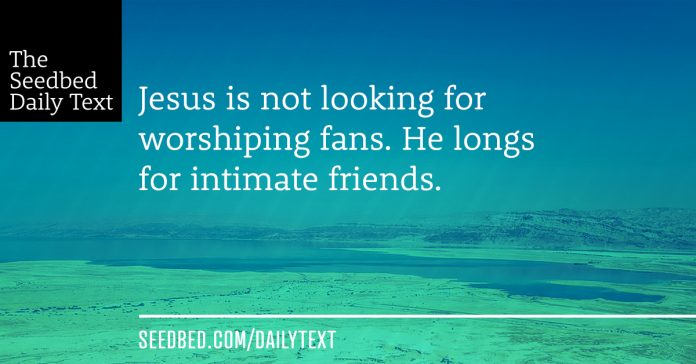 Now a man named Lazarus was sick. He was from Bethany, the village of Mary and her sister Martha. (This Mary, whose brother Lazarus now lay sick, was the same one who poured perfume on the Lord and wiped his feet with her hair.) So the sisters sent word to Jesus, “Lord, the one you love is sick.”

When he heard this, Jesus said, “This sickness will not end in death. No, it is for God’s glory so that God’s Son may be glorified through it.” Now Jesus loved Martha and her sister and Lazarus. So when he heard that Lazarus was sick, he stayed where he was two more days, and then he said to his disciples, “Let us go back to Judea.”

Let’s call this the conundrum of Bethany. Mary, Martha, and Lazarus made their home in Bethany. They enjoyed a deep friendship with Jesus. In fact, their home in Bethany seems to have been a place of refuge for him. I think of it as a place where he could be off-duty in a sense. It’s almost impossible for famous people to have friends. Once a person is put on a stage like that, it’s difficult for people to see beyond it.

It’s interesting how the Gospel writers take us on the inside of these relationships. There was that time in the early days when Martha drove herself mad trying to get everything just so for Jesus and his disciples. Remember the time Mary broke with all social convention and sat at his feet listening to him? Then she did it again later, pouring the expensive perfume on his feet.

Now Jesus loved Martha and her sister and Lazarus.

They were friends—not fans. It brings me to say something you may consider controversial. You may not agree and that’s fine—just don’t throw anything at me. ;0) Jesus is not looking for worshipful fans. He longs for intimate friends. We will see this a few chapters later when he tells his disciples, “I no longer call you servants . . . Instead I have called you friends, for everything I have learned from my Father I have made known to you” (John 15:15). Jesus did not come to us to be worshipped like a celebrity, but to be known as a friend.

To be sure, becoming a friend of Jesus doesn’t happen all at once. It’s not the starting place. We must know him as Savior first, then as a disciple. Discipleship must lead to knowing him as Lord. And here is where we get off track. Our rightful worship of Jesus will lead us down one of at least two paths. Will we become fans (even super-fans), arrested in discipleship development, or will become his friends?

It’s costly to become his friend. It will mean being disappointed by him at times. He may even be a couple of days late for your funeral. But, at other times, it’s for his friends that he raises the dead.

That’s the conundrum of Bethany. More on that tomorrow.

Abba Father, we thank you for your Son, Jesus, our Savior, our Lord and, yes, our friend. Reveal to us where we stand with him and open the path for us to go further. Come, Holy Spirit, and make us into the abiding friends of Jesus. It is in his name we pray, amen.

1. Where do you find yourself on the path? Do you know Jesus as Savior? Lord? Friend?

2. What do you think of this notion of getting stuck in discipleship, arrested in fandom, instead of progressing into friendship?

3. Do you want to become a better friend to Jesus? What step might you take in that direction?