Why Mary Matters to Us - Seedbed
close
Menu 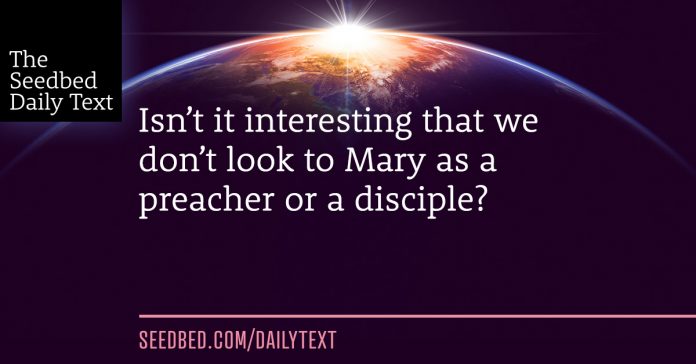 26 In the sixth month of Elizabeth’s pregnancy, God sent the angel Gabriel to Nazareth, a village in Galilee, 27 to a virgin named Mary. She was engaged to be married to a man named Joseph, a descendant of King David. 28 Gabriel appeared to her and said, “Greetings, favored woman! The Lord is with you!”

29 Confused and disturbed, Mary tried to think what the angel could mean. 30 “Don’t be afraid, Mary,” the angel told her, “for you have found favor with God! 31 You will conceive and give birth to a son, and you will name him Jesus. 32 He will be very great and will be called the Son of the Most High. The Lord God will give him the throne of his ancestor David. 33 And he will reign over Israel forever; his Kingdom will never end!”

35 The angel replied, “The Holy Spirit will come upon you, and the power of the Most High will overshadow you. So the baby to be born will be holy, and he will be called the Son of God. 36 What’s more, your relative Elizabeth has become pregnant in her old age! People used to say she was barren, but she has conceived a son and is now in her sixth month. 37 For the word of God will never fail.”

38 Mary responded, “I am the Lord’s servant. May everything you have said about me come true.” And then the angel left her.

One day when she was six years old, my oldest daughter said to me, “Daddy, when I grow up I want to be a boy.” A little stunned, I asked her why. “Because,” she said, “then I can be a preacher like you.”

As best I could on a first grade level, I explained to her a theology of why girls could be preachers, too. In fact, I told her, the first preacher in the Jesus story was a woman.

The first human to preach good news in the New Testament was Mary. After the angel Gabriel delivers the news, she sings her first sermon:

46 “Oh, how my soul praises the Lord.
47 How my spirit rejoices in God my Savior!
48 For he took notice of his lowly servant girl,
and from now on all generations will call me blessed.
49 For the Mighty One is holy,
and he has done great things for me.
(Luke 1:46-49)

Isn’t it interesting that we don’t look to Mary as a preacher or a disciple? We tend to look all year for discipleship cues from people like Moses, David, Peter, or Paul. But just once a year we look at Mary, and then usually to reduce her and her womb to a utilitarian role.

I have a hunch part of the reason this happens is residual anti-Catholic bias. When I was growing up, ask if someone else was a Christian, and the response could be, “No, she’s a Catholic.” And Catholics were different because they “prayed to Mary.”

But in throwing out the baby out with the holy water, we’ve missed seeing Mary as the first exemplar of discipleship: She is willing to lay down her life for Jesus. She is willing to give up her entitlements, all she’s worked for, all she could be, and her reputation to have Jesus formed in her for the sake of the world.

Here comes the news that her life will be undone, and nothing will be the same again, and she replies with, “Oh how my soul praises the Lord.” Later in her song she preaches:

54 “He has helped his servant Israel
and remembered to be merciful.
55 For he made this promise to our ancestors,
to Abraham and his children forever.”
(Luke 1:54-55)

Mary knows her God, and she knows the Scriptures. She is our first preacher and our first disciple, living her life where what she believes intersects with what she does.

Paul says in Colossians 1:27 that the mystery of God is, “… Christ in you, the hope of glory.” Advent gives us another chance to embrace that mystery like Mary: to lay down our lives, entitlements, and reputations so the love of Christ can be formed in us, for the sake of the world.

May everything about this come true.

Heavenly Father, thank you for your servant Mary. This generation calls her blessed because you did great things for her. Would you do great things for us. Would you give us Mary’s sprit, so we can lay down our lives and have Jesus formed in us. In his name we pray. Amen.