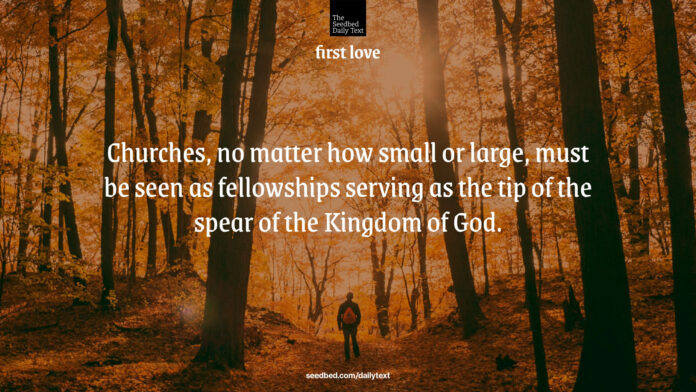 I thank my God in all my remembrance of you, always in every prayer of mine for you all making my prayer with joy, because of your partnership in the gospel from the first day until now. And I am sure of this, that he who began a good work in you will bring it to completion at the day of Jesus Christ.

The little church in Philippi didn’t have a street address, but they knew their station. Birthed in a dream, they didn’t have a vision; they were a vision. Remember this? “During the night Paul had a vision of a man of Macedonia standing and begging him, ‘Come over to Macedonia and help us.’ After Paul had seen the vision, we got ready at once to leave for Macedonia, concluding that God had called us to preach the gospel to them” (Acts 16:9–10).

Named by Philip II, father of Alexander the Great, Philippi had its own storied past. It was the site of the most significant military engagement in all the Roman Empire. In 42 BC Mark Antony and Octavius conquered the republican forces of the assassins of Julius Caesar, Cassius, and Brutus. Philippi was the pride of the empire, a “little Rome” for which the empire had high hopes.

When the people heard the letter and words like, “he who began a good work in you will bring it to completion at the day of Jesus Christ,” they didn’t hear it as so many isolated individuals searching for isolated, individual, self-fulfilling lives in the world. They heard it more like the Pittsburgh Steelers would hear a coach beckoning them toward the Super Bowl.

Somehow we’ve lost our sense of the local church as the Pittsburgh Steelers. We have lost the sense of our towns and cities as battlefields of darkness versus light and of death versus life. We have lost the sense of our fellowship (no matter how small or large) as the tip of the spear of the kingdom of God. What if we could see our churches that way again, as movements in our communities? To one degree or another, that’s how every one of them began. What if we could begin again? Would you want to?

One of my favorite quotes is from C. S. Lewis’s Screwtape Letters, a series of short letters written from the vantage point of a senior demon instructing a junior demon on how to effectively tempt people. This excerpt is from a letter concerning the church:

One of our great allies at present is the Church itself. Do not misunderstand me. I do not mean the Church as we see her spread out through all time and space and rooted in eternity, terrible as an army with banners. That, I confess, is a spectacle which makes our boldest tempters uneasy. But fortunately it is quite invisible to these humans.

Abba Father, we thank you for your Son, Jesus, who would make all of our churches outposts of the kingdom of God against which the gates of hell will not prevail. Rekindle our sense of the church from your point of view. Awaken us to the possibilities of our church anew. We pray in Jesus’ name, amen.