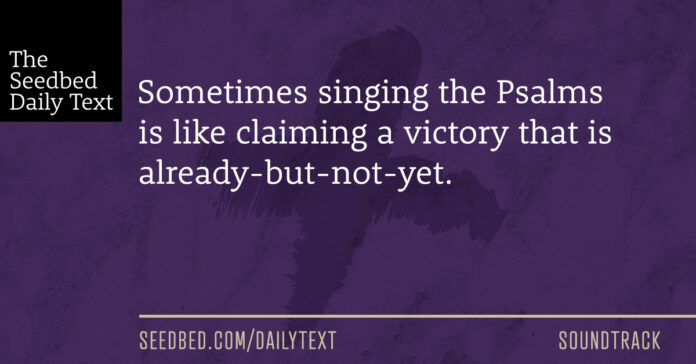 To the tune of “This Is My Father’s World” S.M. Sing it at seedbed.com/soundtrack

1 Contend, O Lord, with those
who do contend with me;
And fight against all those arrayed
who battle against me.
2 Take up Your shield and sword;
arise, come to my aid.
3 Oppose all those pursuing me;
say to me, “You are saved.”

4 May those who seek my life
now be disgraced and shamed;
May those who plot my ruin, Lord,
be turned back and dismayed.
5 Like chaff before the wind,
may angels drive them out.
6 May their path dark and slipp’ry be—
pursued by angels’ shout.

7 Because they hid their net,
dug pits without a cause;
8 May nets they hid entangle them;
in their pits let them fall.
9 Then my soul will rejoice
in the Lord’s salvation;
10 And I’ll exclaim, “Who’s like You, Lord?
You save the poor from them.”

11 The ruthless testify;
pose questions filled with scorn;
12 They repay evil for my good
and leave my soul forlorn.
13 And yet when they were ill,
I fasted and I prayed;
14 I mourned as for my friend in grief,
tears as for family made.

15 But when I fell, they came;
attacked with sland’rous glee.
16 Like wicked, they with malice mocked,
and gnashed their teeth at me.
17 How long will You look on?
O Lord, come rescue me!
And save my life from ravages
of lions who stalk me.

18 Then I will give You thanks;
Your praises I will sing;
And in the congregation great,
exalting praise I’ll bring.
19 Don’t let my foes rejoice,
who hate me without cause.
Don’t let them gloat and wink their eye
with malice, but no cause.

24 Lord, in Your righteousness,
don’t let them gloat o’er me.
25 Don’t let them think, “Aha, we won!
We’ve conquered him wholly.”
26 May those who gloat o’er me
and the distress I face,
Who lift themselves o’er me be clothed
with shame and with disgrace.

27 May all who take delight
that vindication’s mine,
May they with joy and gladness shout,
and say, “The glory’s Thine!”
The Lord delights as those,
His servants, are made strong;
28 My tongue will sing Your righteousness
and praises all day long.

Freddy Mercury had it right. I am only now beginning to understand that his song “We Are the Champions” is actually a lament. He is claiming a victory that is already-but-not-yet. The hope here is not so much in God, as it is in the final score, but you get the point. As Peter Kuzmic, a noted theologian from Croatia, is believed to have said, “Hope is the ability to hear the music of the future. Faith is having the courage to dance to it today.” Look up the lyrics to “We Are the Champions,” and you’ll see what I mean.

Now, be honest. You couldn’t resist singing along as you read through it, could you? You could hear the music, couldn’t you? It would be an absurd exercise to simply read the lyrics without music, wouldn’t it?

The same is true of the Psalms.

Can you remember a time when you experienced some form of opposition? Our friends may provide helpful resistance to us, but an enemy outright opposes. The challenge is knowing the difference. Have you ever experienced having a friend who became an enemy?