Why Sexual Immorality Is Not the Problem - Seedbed
close
Menu 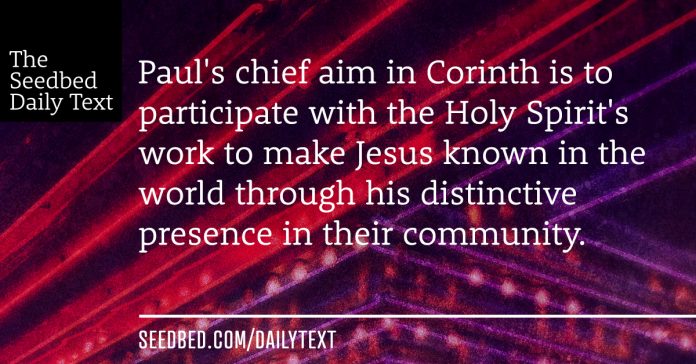 It is actually reported that there is sexual immorality among you, and of a kind that even pagans do not tolerate: A man is sleeping with his father’s wife. And you are proud! Shouldn’t you rather have gone into mourning and have put out of your fellowship the man who has been doing this? For my part, even though I am not physically present, I am with you in spirit. As one who is present with you in this way, I have already passed judgment in the name of our Lord Jesus on the one who has been doing this. So when you are assembled and I am with you in spirit, and the power of our Lord Jesus is present, hand this man over to Satan for the destruction of the flesh, so that his spirit may be saved on the day of the Lord.

Your boasting is not good. Don’t you know that a little yeast leavens the whole batch of dough? Get rid of the old yeast, so that you may be a new unleavened batch—as you really are. For Christ, our Passover lamb, has been sacrificed. Therefore let us keep the Festival, not with the old bread leavened with malice and wickedness, but with the unleavened bread of sincerity and truth.

I wrote to you in my letter not to associate with sexually immoral people—not at all meaning the people of this world who are immoral, or the greedy and swindlers, or idolaters. In that case you would have to leave this world. But now I am writing to you that you must not associate with anyone who claims to be a brother or sister but is sexually immoral or greedy, an idolater or slanderer, a drunkard or swindler. Do not even eat with such people.

Today we have a challenge. The text is longer than usual and much more complex and nuanced in its arguments. Even more difficult, it deals with church discipline, a concept utterly foreign to us; at least those of us in the United States of America. The final difficulty lies in its subject matter, immorality, and notably sexual immorality, which is a hotly debated issue not only in the culture around us but in some of our churches. Given these realities, it would be impossible for me to give adequate treatment to a text like this in this venue and format. Additionally, it would be ill-advised to speak beyond generalities in my attempt. I can neither back away from the text, nor can I fully dive in. Adding to that, I have already spent more than one hundred words making these qualifications. So what am I to do? I will simply make some broad propositional observations.

1. We are going to hear a lot from Paul on the subject of sexual immorality in this letter. It’s not because sexual sin lives in another category from other sins. The reason Paul engages it head on is because it was a particularly pervasive category of sin in Corinth.

2. Because the boundaries of sexual behavior were almost non-existent in ancient Corinth, people who had become followers of Jesus would have brought these kinds of patterns right into the church.

3. The big problem with the Corinthians is they wanted to reclassify certain categories of sin—namely the sins they were accustomed to— as “not sin.” Paul said the effect of this would be to do great damage to the whole community.

Don’t you know that a little yeast leavens the whole batch of dough?  Get rid of the old yeast, so that you may be a new unleavened batch—as you really are.

Paul shows his cards early on that he will be even handed when it comes to sexual sin, not singling out one sin over another. He will name most of them before it is all said and done here. It is also interesting to note how he lists sexual immorality as part of a larger and much broader list of sins in this context.

4. Paul is urging the young church to come to grips with the powerful “as you really are” new reality the Holy Spirit was bringing about through the gospel of Jesus Christ. This new reality? Deliverance from the power of sin.

5. The particular issue at hand in today’s text is that of the church tolerating and even condoning sexual immorality. Yes, Paul is concerned for the salvation of this guy who was sleeping with his step-mother, but his greater concern is for the life of the church. (Can you imagine the letter that Paul might write to the Roman Catholic Church concerning the sexual abuse scandals among the priesthood?!)

6. So, throw the guy out?! It sounds harsh, but remember Paul’s chief aim in Corinth is to participate with the Holy Spirit’s work to make Jesus known in the world through the distinctive presence of a community of people who are so compellingly and winsomely and beautifully different that the sin sick, broken people of the world will be irresistibly drawn into their fellowship.

7. Consider Paul’s options. A) Look the other way, and let it go. There are, after all, other problems to deal with. B) Ask the man to cease his association with the church as an assembly until such time as he had ended this relationship. C) Create a restoration process whereby the man is graciously yet firmly confronted, put on leave from the public gathering of the church, and given a pathway toward recovery and reincorporation into the church.

The problem with A is not only is the inevitable ruin of the man at issue here but the corruption of the church. A posture of tolerating sin inevitably leads toward its outright affirmation later. The problem with B is it seems harsh and a far cry from redemptive. It looks and feels like shaming and shunning, which seem like the last thing Jesus would ever do. It’s why I think Paul chose C.

Why do I think this? To borrow an old legal term, here’s my theory of the case. Paul forbade the people of the church to associate with unrepentant sinners who claimed to be brothers or sisters in Christ. Paul did not forbid the community to avoid contact with sexually immoral people in Corinth who were not part of the church. How could they ever witness to such people if they couldn’t engage with them? On the other hand, what kind of distinctive witness would they have if the people in their church were no different than the people outside of it? In fact, in this case, what this guy was up to with his step-mother was even forbidden by the sex-crazed Corinthians, creating the ironic situation whereby the church was affirming behavior not even allowed by the world around them. I think Paul was actually creating a context whereby the people of the church could relate to this man in redemptive and hopefully restorative ways. Follow the logic?

Bottom line: Having sex with your step-mother is a problem, but it is not the problem. The problem for Paul is a church without integrity. The problem is the refusal of God’s people to call sin “sin” and deal with it redemptively.

The big issue here, as noted, is not sexual immorality, but calling sin “not sin.” In our present context, none of us would likely contend for the virtue or even permissibility of the son having sexual relations with his step-mother. In other words, we would not want to call sin “not sin” in this instance. While there is no reference in this text to other particular dimensions of sexual brokenness, it strikes me that this is precisely what is happening in our culture—many people within the church are contending that what has long been considered sexual sin should now be called “not sin.”

Again, sexual immorality is not the problem. The issue is the growing willingness of the church to call sin “not sin.” Once this happens, the church ceases to be a pathway toward redemption for people whose broken sexuality has broken their lives. In other words, if you are part of a church and you have been broken by a sin the church no longer considers a sin, then the church can’t help you.

Our Father in heaven, hallowed be your name. And hallowed be your church. Forgive us for the ways we have singled out sins and shamed sinners. Teach us what it looks like to forgive sin and embrace the sinner. Save us from the perilous pathway of calling sin “not sin.” Give us the courage to not so much take a stand against sin but stand on the premises and promises of your Word in the power of your Spirit. Teach us to to kneel down as sinners with sinners, allowing you to be the judge in your way and your time. Lead us through the challenging times we face, knowing that the way we walk will determine our destination. In Jesus’ name, amen.

1. Given this line of thinking, with which you may not agree, how might Paul respond to the issue of homosexuality in today’s world?

2. What does it look like to embrace a person without affirming their sin? How does discipline play into that reality?

3. What is the long-term impact of calling or redefining sin as “not sin”? Where does that lead?

© Seedbed 2021
Why Sexual Immorality Is Not the Problem
MORE STORIES