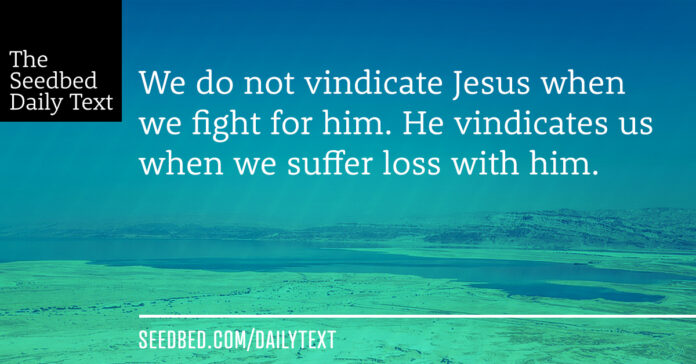 10 Then Simon Peter, who had a sword, drew it and struck the high priest’s servant, cutting off his right ear. (The servant’s name was Malchus.)

11 Jesus commanded Peter, “Put your sword away! Shall I not drink the cup the Father has given me?”

12 Then the detachment of soldiers with its commander and the Jewish officials arrested Jesus. They bound him 13 and brought him first to Annas, who was the father-in-law of Caiaphas, the high priest that year. 14 Caiaphas was the one who had advised the Jewish leaders that it would be good if one man died for the people.

17 “You aren’t one of this man’s disciples too, are you?” she asked Peter.

18 It was cold, and the servants and officials stood around a fire they had made to keep warm. Peter also was standing with them, warming himself.

Today’s text presents a fascinating pairing of courage and cowardice in the person of Peter. Peter, who said he would fight to the death with Jesus seems to make good on his promise as he draws his sword to defend him. However, within the hour he will disavow knowing him. What on earth is going on here?

Does this come down to our own self interest? Peter rises to the occasion as the public hero yet slinks into the shadows when his private loyalty promises no gain. Peter is ready to go all-in when he thinks he can win, but he folds his cards when he knows defeat is immanent. Why do we defend Jesus when it serves our own interest yet deny him when it serves only his? It is because we have surrendered to our enemy instead of to our friend.

Do you remember the old hymn, “Stand up for Jesus?”

Stand up, stand up for Jesus! ye soldiers of the cross;
Lift high His royal banner, it must not suffer loss:
From vict’ry unto vict’ry, His army shall He lead,
Till every foe is vanquished, and Christ is Lord indeed.

The Apostle Paul knew this well. He had given his life to be the great vindicator of God. No-one stood up for God more than the pre-Paul Saul. His sole ambition? To vanquish the foes of God. Then he met Jesus, who knocked him off his horse. After that everything changed. Paul went from God’s lawyer to Jesus friend. He did not stand up for Jesus. He laid down his life for him. He did not fight for Jesus. He suffered with him. He did not hate the enemies of God. He loved them to the very end.

In what is perhaps the most glorious expression of holy ambition in the history of the Church Paul put it like this:

“I want to know Christ and the power of his resurrection, and the fellowship of sharing in his sufferings, becoming like him in his death, and so somehow attaining to the resurrection from the dead.” (Philippians 3:10-11)

Jesus didn’t need Peter to stand up for him. He needed him to suffer with him. The same is true for us.

Abba Father, thank you for your son, Jesus, who needs no vindication. Forgive us standing for him when it serves our self interest yet failing to suffer with him when it serves him alone. Come Holy Spirit and bring us into the fellowship of the Cross, which is the friendship of Jesus. We do not grasp this. Give us the courage to get off our high horse and come low to the ground before you. We pray in Jesus name. Amen.

1. I want to challenge you to ruminate on Paul’s words today. Personalize them as your own prayer. As we proceed to the Cross let them become the royal banner we lift high.

2. What is “the fellowship of sharing in his sufferings,” in your understanding? What holds you back from this?