Why the Empty Tomb Is Not Enough - Seedbed
close
Menu 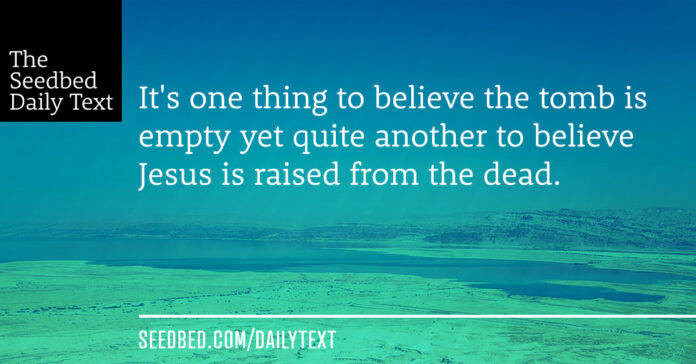 Finally the other disciple, who had reached the tomb first, also went inside. He saw and believed. (They still did not understand from Scripture that Jesus had to rise from the dead.) Then the disciples went back to where they were staying.

Now Mary stood outside the tomb crying. As she wept, she bent over to look into the tomb and saw two angels in white, seated where Jesus’ body had been, one at the head and the other at the foot.

They asked her, “Woman, why are you crying?”

“They have taken my Lord away,” she said, “and I don’t know where they have put him.” At this, she turned around and saw Jesus standing there, but she did not realize that it was Jesus.

They came. They saw. They went back to where they were staying.

Over the centuries we have developed the impression that Easter was a slam-dunk reality. Everyone woke up early. Someone said, “He is risen,” and everyone else responded, “He is risen indeed,” and then everyone went to the country club for lunch.

It was not that way.

Finally the other disciple, who had reached the tomb first, also went inside. He saw and believed.

I always read this verse to mean the disciple believed Jesus was raised from the dead. It means he believed someone had taken Jesus’ body from the tomb. Look what happened next.

Then the disciples went back to where they were staying.

They came. They saw. They went back home.

Though the resurrection happened suddenly, Easter itself is a slow-rising reality. It’s one thing to believe the tomb is empty, yet quite another to believe Jesus is risen from the dead.

The question we must ask ourselves is this one: Is our faith built on an empty tomb or on a risen Lord? That the tomb is empty is not an article of faith. It is a fact of history. We can go and see it today. The empty tomb was enough to get the disciples to come and see and go back home. Neither is the resurrection of Jesus a spiritual phenomenon—something that must be experienced to be believed. The sentimental hymn lyrics, “You ask me how I know he lives. He lives within my heart,” will not suffice.

The circumstantial evidence of the empty tomb is good but inadequate. The inner experience of a spiritual resurrection is nice but not enough. The Christian faith is built on nothing more and nothing less than the physical, bodily resurrection of Jesus Christ from the dead. It either happened or it did not. If it did, the implications are mind-bogglingly unfathomable. If it did not, we are fools.

This is not my truth or your truth. It is either the truth or it is not true at all.

Abba Father, we thank you for your Son, Jesus, who is risen from the dead. Bring us to an unshakable clarity of conviction around this eternal reality. Bring us to this reckoning of believing or not and give us the courage to land on one side or the other. Save us from the mushy middle ground of maybe. We pray in Jesus’ name, amen.

1. Do you believe Jesus is physically, bodily raised from the dead? Why or why not?

2. Do you believe it by a preponderance of the evidence or beyond a reasonable doubt?

3. Why do you think it is so critical to be clear on this singular point? Or don’t you?

© Seedbed 2021
Why the Empty Tomb Is Not Enough
MORE STORIES