Why the Resurrection Must Mean More - Seedbed
close
Menu 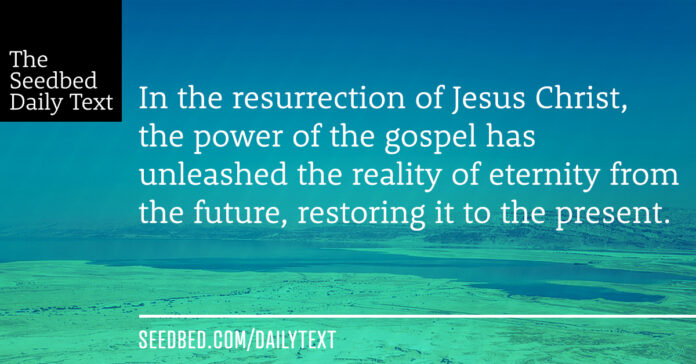 Early on the first day of the week, while it was still dark, Mary Magdalene went to the tomb and saw that the stone had been removed from the entrance. So she came running to Simon Peter and the other disciple, the one Jesus loved, and said, “They have taken the Lord out of the tomb, and we don’t know where they have put him!”

So Peter and the other disciple started for the tomb. Both were running, but the other disciple outran Peter and reached the tomb first. He bent over and looked in at the strips of linen lying there but did not go in. Then Simon Peter came along behind him and went straight into the tomb. He saw the strips of linen lying there, as well as the cloth that had been wrapped around Jesus’ head. The cloth was still lying in its place, separate from the linen.

We miss the shocking surprise of the resurrection of Jesus because our hindsight will not allow us to linger in the stunning sting of his death. I mean, just when you thought things could not get any worse, they get worse.

We don’t commonly make this connection, but Easter actually began with more bad news. Mary Magdalene left her home in the darkness of Sunday morning to meet the dawn of a new day of grief. She found the tomb, but Jesus’ body was gone.

Where did we get the idea that Mary was going to the first Easter sunrise service? It never dawned on her (or anyone else) that Jesus was alive. Clearly someone had stolen his body. The ultimate insult now followed the ultimate injury.

For us, the resurrection of Jesus is like being in on the surprise of our surprise birthday party. It’s hard to be surprised when you know it is going to happen. There’s just no way to un-know it.

On the other hand, we have all lived through or are living in situations that keep getting worse. I’m trying to ask a question here I can hardly even understand. What if the resurrection of Jesus actually creates the possibility for an alternate reality just on the other side of any hopeless situation? We think we are on the way to the grief of a grave, but what if we are seeing the situation all wrong? What if the resurrection of Jesus doesn’t just defeat death; what if it reverses it? In other words, where sin and death once ruled, love and life would now reign. It would mean no situation or scenario would be too difficult for God—that nothing would be impossible.

The gospel must mean more than the indefinite extension of one’s life beyond one’s physical death. After all, death is more than the event at the end of your life. Death is the pervasive force of darkness that, as the poet says, sticks to everything.

In the resurrection of Jesus Christ, the power of the gospel has unleashed the reality of eternity from the future, restoring it to the present into the lives of all who will not just believe and walk over the line but who will live over the line—who won’t just be born again but who will grow up into this new life. This is the life Jesus came to reveal and now lives to release into all creation.

Abba Father, we thank you for your Son, Jesus, who has defeated death, not just the finality of the event of death but the very principality of death. Enlarge our understanding of his resurrection that we might not just hope for it but live into it. Come, Holy Spirit, and awaken us anew. We pray in Jesus’ name, amen.

1. How does the advantage of historical hindsight prove a disadvantage for us when approaching the tomb of Jesus?

2. What do you think? Is the gospel more than the indefinite extension of life beyond the grave? If so, what?

3. What does it mean that death, beyond just the event of death, is defeated? In your own life?

P.S. Getting close to last call on the Daily Text Advent Journey— The Christian New Year. Get your copy today. This is going to be the best Advent of our lives— in the face of the worst times in our history. COME ON!

© Seedbed 2021
Why the Resurrection Must Mean More
MORE STORIES