The garden reveals the crux of our alienation from God, “the difficulty that the human heart and mind can have in genuinely trusting God as a wise creator and living accordingly.” (1) Embedded in the story of disobedience is the key challenge to relationship with God that has been faced ever since, the decision of the creature to trust or not to trust the Creator. Satan is aware of this challenge and makes the trustworthiness of God the object of his attacks.

While Eve was the principal actor in the Genesis account, the New Testament blames the fall on Adam (Romans 5:12). Adam’s sin changed the relationship between creature and Creator. Adam had no reason to distrust God, but he chose to allow distrust, distance, suspicion, and disobedience to enter into his relationship with God. Dennis Kinlaw wrote, “And behind the shift from trust and communion to suspicion and separation was an overriding concern for themselves.” (2) Like Adam and Eve, we all have a tendency to make ourselves the center of importance.

Martin Luther used the phrase “cor incurvatus ad se” to depict this human condition, which means “a heart curved in on itself.” Sin occurs when a person rebels against the created order and takes the place of God in his or her life. Alignment, or misalignment, of life around oneself means we determine the priorities of life and we live in a way that tries to satisfy those often distorted priorities.

Look at the deceptive nature sin can have. The distinction between blessing and curse can be subtle, confused all the more by Satan’s implication, “You deserve this!” Further, Luther observed that God gave Adam no rationale as to why he was not to eat from this particular tree. In addition, from the perspective of Adam and Eve, neither of the two could look at the fruit and conclude rationally that God’s command not to eat was good and reasonable.

The tree was beautiful, its fruit would satisfy the natural need for food, and it would give them wisdom. To the rational mind, these all seemed to be good. But if the rational mind is corrupt, mistaken ideas and false beliefs will poison life. The command was not one to be justified through reason. It was to be obeyed for the sole reason that it came from God.

It was precisely at this point that the serpent sought to drive the wedge between God and humans, this point of struggle between trust in rational human thought and trust in God. Satan tempted Adam and Eve to make what seemed to be a rational decision even though it was in clear opposition to God’s command. This new scenario afforded to them the greatest opportunity to demonstrate trust in God, obedience even when the rational mind does not understand the way of God (Isaiah 55:8–9). Instead, Adam and Eve substituted their own human reasoning for the word of God and trust in their own rationalization for trust in God. “One of the major theological points of this story is that true wisdom comes only through intimacy with God and the attempts to secure wisdom outside fellowship are doomed to failure.” (3) It also makes it clear that the deepening ability to trust God is a vital element of spiritual formation.

Some observe that the eating of the apple was, after all, not a very serious offense, making it easy for our human reasoning to tell us that the punishment did not fit the crime. Such a simple act, it may seem, should not have borne the consequence of the death of not only the perpetrators but all of their descendants. To the contrary, though, it is important that we understand that it is the seemingly inconsequential nature of the command and its breach that conveys the very point of the story. The arguable irrationality of the command combined with the threat of death upon disobeying has been understood to mean that even the slightest disobedience of the command “was and must be a totally catastrophic sin which would estrange from God not only the immediate offender but also all future descendants and indeed all future humanity.” (4)

We come to the understanding that God set out a fundamental truth that defines our relationship with him. Any disobedience is sin and any sin has tragic consequences. We can understand this seemingly harsh outcome more clearly when looking at the contrast between the first Adam and the second Adam, Jesus. Matthew 4 tells the story of another temptation—the temptation of Jesus in the wilderness. Jesus had just been baptized, had heard the affirming words of the Father, and was beginning his public ministry. We are told that he was led into the wilderness by the Holy Spirit to be tempted by Satan. The first two of the three temptations that followed were prefaced with the challenge, “If you are the Son of God” (Matt. 4:3, 6). It was God the Father who, at the baptism of Jesus, said, “This is my dearly loved Son, who brings me great joy” (Matt. 3:17). Once again, as in the temptation of Adam and Eve, Satan was saying, “Did God really say?” More specifically, the tempter was saying, “If you are the Son of God, you deserve more than God is giving you.

You have a right to more!” The temptations came in three forms: to turn stone into bread for his own need, to prove his identity as the Son of God, and to claim dominion over all the nations. Succumbing to the first temptation would seem to have had the reasonable, sensible end of satisfying his hunger; the second of proving that he was indeed the Son of God. The third would have been consistent with a dominion already promised in Scripture as Jesus is Lord of all.

Each of these temptations involved the sin of seeking fulfillment outside of the trusting relationship with the Father. Still, because of the promised results, we are so capable of rationalizing these as reasonable and acceptable ways for Jesus to have responded: being fed, being known, and being exalted. Although he was defeated by Jesus in the wilderness, we see Satan’s tenacity when he came back with the same temptation at the cross. The same conditional statement, “if you are the Son of God,” came once again through the mouths of Jesus’ tormentors, challenging Jesus to come down from the cross (Matt. 27:40).

It would be easy to rationalize that in feeding himself or escaping from the horror of the cross there was no harm and no fault in Jesus to be found. But this rationalization, so easily made from a self-referenced viewpoint, would obscure Matthew’s depiction “of what it means for Jesus to be Son of God, in which his refusal to go along with the enticing suggestions is not marginal but fundamental to the whole meaning of his trusting and obedient sonship.” (5) In other words, the obedience of Jesus that flowed from absolute trust of God was constitutive of the relationship between God the Father and God the Son. It is a relationship conditioned upon absolute trust, which is the basis for absolute obedience.

The decision of Adam and Eve of whether to succumb to the enticing suggestion of Satan was neither marginal nor inconsequential, but rather points to the very essence and intensity of the trust relationship for which and into which they were created. They were created by God and for God, which called for unswerving trust in God. Adam substituted his own rational understanding of what seemed good for what God said was good for him. John Wesley spoke of the consequence of Adam’s action: “By these acts, the man and the woman flagrantly declared that they would no longer have God as their ruler. They would be governed by their own wills, not the will of God who created them. They would not seek happiness in God, but in the world and in the works of their own hands.” (6) Jesus, on the other hand, sacrificed himself in obedient trust of the Father. A marked difference between the first Adam and the second Adam was their trust in God.

It becomes apparent that trust in God was the central issue in the temptation that led to the fall. As Oswald Chambers wrote, “Our problems arise when we refuse to place our trust in the reality of His presence,” (7) recognizing that an awareness of God’s presence strengthens our ability to trust. Had Adam and Eve been attuned to God’s presence, it surely would have influenced their actions. They had a choice, which gave them the full opportunity to trust in God. Trust in God allows for dependence upon God and, in their case, trust for food and wisdom. Distrust of God requires dependence upon oneself. This brings us to a deeper understanding of sin: Sin is our unwillingness to be radically dependent upon God “for life and breath and all things.” It is, therefore, the idolatry of preferring to be “gods” rather than truly human (which was, of course, the primal temptation in Eden). (8) Trust may at times in our lives be an easy response, but at some point a trust of radical dependence is likely to be demanded of (or offered to) all of us who are disciples seeking to be like Jesus.

Again, in the contrast between Adam and Jesus, the meaning and purpose of life is brought into clear focus. Both faced a command that from a purely human viewpoint lacked strong rational clarity. For Adam, the command was not to eat within the context of every need being provided for him. For Jesus, the command was for total surrender even to death. Trust in the Father, that God is without qualification a good and sovereign God, is the defining essence of the relationship between the Father and the Son. This trust sustained Jesus through his passion, crucifixion, and resurrection:

It is often observed that Jesus did not answer Pilate when he asked his famous question, “What is truth?” (John 18:38). We may think of the entire passion, however, as Jesus’ answer. The right human relation to the one true God is that of trusting in the life-giving power of the Spirit of the Father, even in the face of hostile enemies. (9)

Adam and Eve missed a great opportunity to grow in trust and to love and glorify God by trusting. The whole work of God in redemption is to undo the tragic effects of their decision. Through his unequivocal trust in the Father, Jesus knew the truth, lived the truth, and is the Truth. This invites us to examine the strength of our own commitment to the commands of God and the alertness we have to the opposition that might come from our own rational mind. As modeled by Jesus, we are challenged to trust God as the greatest good even when our rational mind suggests otherwise. 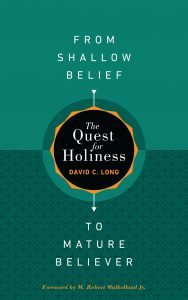 BUY ONE, SOW ONE BOOK OF THE MONTH: Are you interested in learning more about this topic? David Long wrote a book, The Quest for Holiness: From Shallow Belief to Mature Believer. It’s a work that seeks to help individuals, small groups, and entire churches understand humanity’s fallen nature and surrender more and more to the transforming work of the indwelling Holy Spirit. It is also our Book of the Month for March, so you can buy one and sow a second copy for free! Get your copy from our store now.

The Quest for Holiness—From Shallow Belief to Mature Believer video sessions from Seedbed Publishing on Vimeo.