After the Sabbath, at dawn on the first day of the week, Mary Magdalene and the other Mary went to look at the tomb.

2 There was a violent earthquake, for an angel of the Lord came down from heaven and, going to the tomb, rolled back the stone and sat on it. 3 His appearance was like lightning, and his clothes were white as snow. 4 The guards were so afraid of him that they shook and became like dead men.

5 The angel said to the women, “Do not be afraid, for I know that you are looking for Jesus, who was crucified. 6 He is not here; he has risen, just as he said. Come and see the place where he lay. 7 Then go quickly and tell his disciples: ‘He has risen from the dead and is going ahead of you into Galilee. There you will see him.’ Now I have told you.”

The entirety of the Christian faith comes down to these seven words we hear in today’s text:

He is not here; he has risen

I don’t know about you, but I have never heard these words spoken of another person in all of history. Sure, many have come back to life from death but none have been raised from the dead. Resurrection is to resuscitation as the fire of the Sun is to the flame of a match. The one who is resuscitated from death will inevitably die again. The one who is resurrected from the dead has defeated death. Every few years someone takes a trip to Heaven and returns to write a best-seller about how real it all is. While it is a shot of encouragement to some and a body of evidence to others, it is a distraction from the ultimate reality. The ultimate reality is not Heaven. It is Resurrection.

Our hope is not that something will happen some day in the future. No, our hope is anchored in something that has happened and that, in fact, is happening: Resurrection. Resurrection is the realm of Heaven now touching Earth. Resurrection is the tidal wave of Life, once blocked from our earthen experience by the curse of sin and death, now rushing   ashore and filling this world with the fullness of God.

Resurrection, though the core of all doctrine, cannot be held by a doctrinal container. Resurrection, though a historical event, cannot be held by history. Resurrection is the shape and substance of the New Realty, the New Creation, the triumph of Life over Death, of Love over sin, of Light over darkness, of good over evil, and on we will go with this until the final second has ticked off the clock of of history and finally given way to the fullness  of the measureless expanse of eternity.

The universe, like the human soul, is laden with the verities of eternal realities. The corruption of sin and death, while not affecting the verities, has cut us off from the realities. The resurrection of Jesus Christ has re-opened the new and living way, whereby the reality of eternal life now avails itself as the verity of our human lives. You see, the Resurrection is not just something Jesus did. It is who He is. “I am the Resurrection,” he says. Neither is the Resurrection something he has simply done for us, as though death were just some obstacle we needed moved out of our path. Resurrection is the fullness of life—life beyond the power of sin and the reach of death. “I am the Life,” he said, “The one who believes in me will live, even though they die; and whoever lives by believing in me will never die. Do you believe this?” John 11:25-26.

Don’t miss his question. It is to us. “Do you believe this?”

And did you catch that? Jesus was the Resurrection even before the resurrection. Resurrection is far more than we have realized. Let’s give Paul the last word today as he tries to reach his arms around this unfathomable thing.

“I pray that the eyes of your heart may be enlightened in order that you may know the hope to which he has called you, the riches of his glorious inheritance in his holy people, 19 and his incomparably great power for us who believe. That power is the same as the mighty strength 20 he exerted when he raised Christ from the dead and seated him at his right hand in the heavenly realms, 21 far above all rule and authority, power and dominion, and every namethat is invoked, not only in the present age but also in the one to come. 22 And God placed all things under his feet and appointed him to be head over everything for the church, 23 which is his body, the fullness of him who fills everything in every way.” Ephesians 1:18-23.

Father, we simply have little to no idea of the unfathomable new reality you have opened to us. We have thought our task is to somehow prove the resurrection of Jesus actually happened. Of course it happened. Forgive us for the ridiculous absurdity of how badly we continue to miss the point of it all. Fill us with your Holy Spirit in a way that proves the Resurrection as the defining reality of all of life—not as something we agree to or with—but as who we are in our deepest lives. In the name of the Resurrection and the Life, Jesus Christ, Amen. 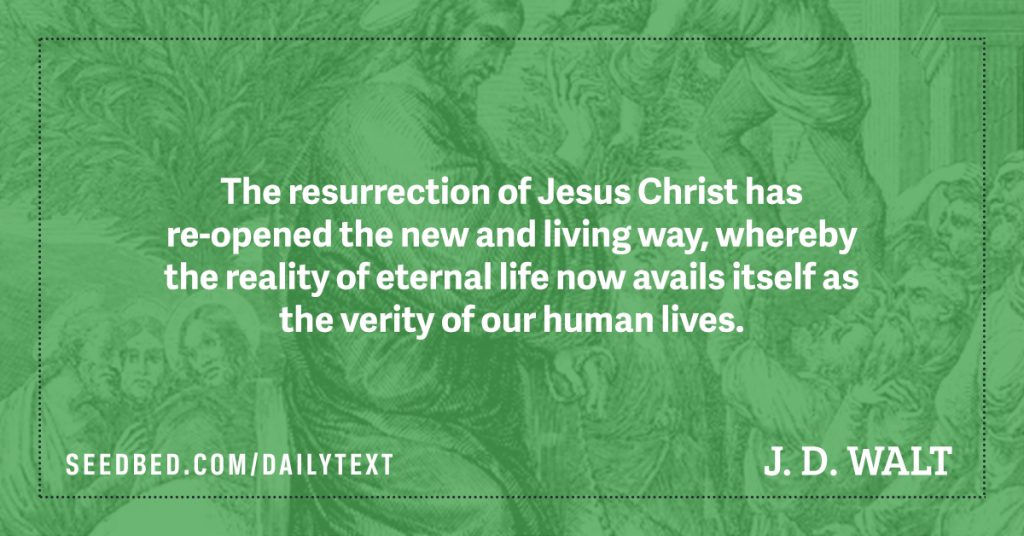 1. I think this is the most ponderous yet practical thing I have ever written. How do you relate to it?

2. What do you think I’m trying to say in today’s reflection? Do you resonate with or reject it?

3. How will your own faith and belief in the Resurrection change or grow from here? What difference will this make beyond the way you presently consider it?