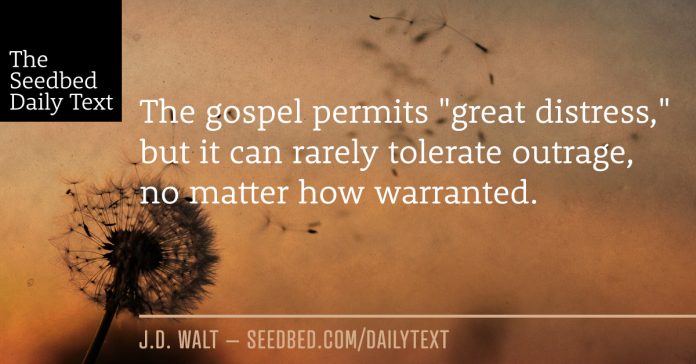 While Paul was waiting for them in Athens, he was greatly distressed to see that the city was full of idols. So he reasoned in the synagogue with both Jews and God-fearing Greeks, as well as in the marketplace day by day with those who happened to be there. A group of Epicurean and Stoic philosophers began to debate with him. Some of them asked, “What is this babbler trying to say?” Others remarked, “He seems to be advocating foreign gods.” They said this because Paul was preaching the good news about Jesus and the resurrection. Then they took him and brought him to a meeting of the Areopagus, where they said to him, “May we know what this new teaching is that you are presenting? You are bringing some strange ideas to our ears, and we would like to know what they mean.” (All the Athenians and the foreigners who lived there spent their time doing nothing but talking about and listening to the latest ideas.)

He was greatly distressed.

Did you get that in today’s text?

It’s what I appreciate about Paul’s approach in Athens. Despite being “greatly distressed” he did not resort to outrage. The gospel permits “great distress,” but it can rarely tolerate outrage, no matter how warranted. Anger will just not get it done.

There’s a word of warning in there to the political partisans among us and if we are honest, we must admit there is some partisan of some variety in us all. And though our side may be right (and I’m pretty sure mine is), our outrage is contagious and if we aren’t careful, it will infect our witness for Christ.

Today’s world looks a lot more like Athens (with all its idols) than Jerusalem. We have two choices. Unleash our outrage over the loss of Jerusalem or embrace the challenges and possibilities of Athens.

We will do great violence to people and a great disservice to the Church if we persist in a “take this country back” approach. America, or any other country for that matter, can only be “won” back by the gospel of Jesus Christ . . . as they say, period.

There’s a third choice: Lament the loss of what once was. Whatever “Christian America” ever was, it is no more. Note again the opening line from today’s text:

While Paul was waiting for them in Athens, he was greatly distressed to see that the city was full of idols.

Lament offers a healthy outlet for our outrage: the presence of God. Remember the time Jesus said, “Happy are those who mourn, for they shall be comforted.” I think this is in part what he was talking about.

We have a lot to be “greatly distressed” about, but great distress will never get it done. Only the creative, Holy Spirit empowered love of Jesus can.

To lament the loss of “Jerusalem” enables us to get on with the business of winning “Athens.”

How much are dealing with outrage over the way things have and are going in your culture or country? Have you lamented the loss or are you spilling your outrage out on others?