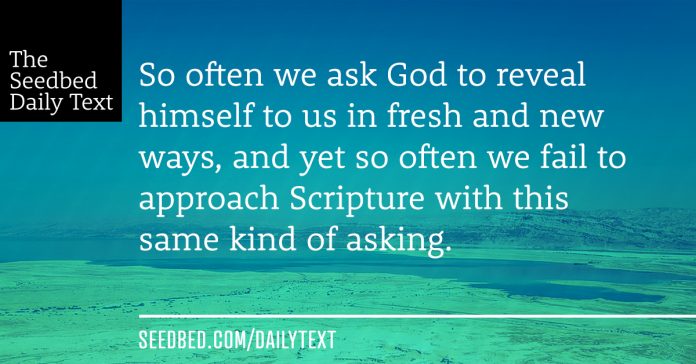 When Jesus saw Nathanael approaching, he said of him, “Here truly is an Israelite in whom there is no deceit.”

“How do you know me?” Nathanael asked.

Jesus answered, “I saw you while you were still under the fig tree before Philip called you.”

Jesus said, “You believe because I told you I saw you under the fig tree. You will see greater things than that.” He then added, “Very truly I tell you, you will see ‘heaven open, and the angels of God ascending and descending on’ the Son of Man.”

Jesus saw Nathanael before he (Jesus) could actually see him. He saw him standing under a fig tree. Not only did Jesus demonstrate a kind of miraculous foresight of Nathanael, he also reveals his insight into him. It’s interesting though how he leads with the insight.

When Jesus saw Nathanael approaching, he said of him, “Here truly is an Israelite in whom there is no deceit.”

Jesus perceived and named a distinctive quality of heart he saw in Nathanael: guilelessness, or stated positively, pure-heartedness. You will remember in his Sermon on the Mount, Jesus said, “Blessed are the pure in heart, for they will see God” (Matt. 5:8). Is this not what Jesus is saying about Nathanael?

Nathanael sees based on the outward revelation that Jesus saw him before he could have possibly seen him (under the fig tree). Jesus then gives Nathanael a word that will come to capture the very essence of the kingdom of God on earth—all that has come before and all that will come after.

“Very truly I tell you, you will see ‘heaven open, and the angels of God ascending and descending on’ the Son of Man.”

Nathanael, this true Israelite, would have immediately recalled Jacob’s dream.

He had a dream in which he saw a stairway resting on the earth, with its top reaching to heaven, and the angels of God were ascending and descending on it. (Gen. 28:12)

When Jacob awoke from his sleep, he thought, “Surely the Lord is in this place, and I was not aware of it.” He was afraid and said, “How awesome is this place! This is none other than the house of God; this is the gate of heaven.” (Gen. 28:16-17)

Nathanael must have felt the ground quake beneath his feet. He must have trembled in awe. He must have stood there in stunned silence, for we never hear another word from him. He was standing in the presence of the Word of God, which is the house of God—the house of God before there ever was a physical house for God—the Word of God before there ever was a physical scroll on which such revelation would be written. Nathanael was standing at the gate of heaven which had come down to earth. He knew he had not climbed up the ladder. He knew God had climbed down. Something tells me he knew that he knew he was tabernacling with the Word made flesh and yet something else tells me he had no idea of it. “Surely the Lord is in this place, and I was not aware of it” (Gen. 28:16).

We passed over this word of Jesus to Nathanael. “You will see greater things than that.” I think it is a word to us as we prepare to proceed into the Gospel. We have been standing at the gate, if you will, of heaven. We are now passing through it and into the realm.

Tomorrow we go to Cana for a wedding.

Abba Father, we can hardly fathom what we are considering. Jesus is the gateway to heaven, not when we die but then and now and always and this gate is open to us. Come, Holy Spirit, and grant us purity of heart. Grace us with repentance from our deceit. Open the eyes of our hearts that we might behold Jesus as never before. It is in his name we pray, amen.

1. So often we ask God to reveal himself to us in fresh and new ways, and yet so often we fail to approach Scripture with this same kind of asking. Are you guilty of this?

2. The Gospel of John is perhaps the most sensationally dynamic book in the Bible. How can we get past our assumption that we have already read it and seen what there is to see? How can we approach with fresh eyes?

3. Do you have an expectation of seeing greater things than you have ever seen before as we proceed into this sacred text?