33 They came to a place called Golgotha (which means “the place of the skull”). 34 There they offered Jesus wine to drink, mixed with gall; but after tasting it, he refused to drink it. 35 When they had crucified him, they divided up his clothes by casting lots. 36 And sitting down, they kept watch over him there. 37 Above his head they placed the written charge against him: this is jesus, the king of the jews.

38 Two rebels were crucified with him, one on his right and one on his left. 39 Those who passed by hurled insults at him, shaking their heads 40 and saying, “You who are going to destroy the temple and build it in three days, save yourself! Come down from the cross, if you are the Son of God!” 41 In the same way the chief priests, the teachers of the law and the elders mocked him. 42 “He saved others,” they said, “but he can’t save himself! He’s the king of Israel! Let him come down now from the cross, and we will believe in him.43 He trusts in God. Let God rescue him now if he wants him, for he said, ‘I am the Son of God.’” 44 In the same way the rebels who were crucified with him also heaped insults on him.

Through the centuries most of the attention has focused on the things Jesus said from the Cross. In today’s text, all the energy goes into what was said to Jesus on the Cross. Let’s look at that.

From the passers by: “You who are going to destroy the temple and build it in three days, save yourself! Come down from the cross, if you are the Son of God!”

From the chief priests: “He saved others,” they said, “but he can’t save himself!

From the teachers of the law: “He’s the king of Israel! Let him come down now from the cross, and we will believe in him.”

From the elders: “He trusts in God. Let God rescue him now if he wants him, for he said, ‘I am the Son of God.’”

Even the rebels crucified alongside him shouted insults and curses at Jesus.

Few if any of us could imagine mocking and heaping insults on any common criminal as he was prepped for lethal injection or being strapped to the electric chair. None of us can imagine doing so to Jesus. We must be mindful, though, that this same cast of characters walks the earth today. Their names and titles and associations have changed but they are alive and well. I fear in days ahead they will become more and more emboldened in their assaults against the crucified Jesus.

The bigger question we must grapple with is this one. If we didn’t say those things, what did we say that day? Where is our character (or avatar if you wish)? Where do we see ourselves in that bloody scene on that tragic day at the place called Golgotha?

“But we weren’t there we want to say?” The question is not if we knew then what we know now where would we locate ourselves. No, the question is where do we see “us,” the disciples of Jesus, in the scene described in today’s text?

When will the sobering truth slay us. We weren’t there. The disciples of Jesus were not present. We don’t know where they were, but we know they were somewhere other than the Cross. They would not be identified with him in that place. They were afraid, maybe disillusioned, perhaps done with it all. Who wanted to follow Jesus into that, right?

It has to get more personal. I was not there that day. I am not at the scene of the Cross. (Now, if you are a disciple who happens to be a woman, the odds are a little better that you were there.)

Chances are if I was not there then, I am not there now. As a disciple of Jesus, I must ask myself the piercing question: Why am I not identifying with Jesus’ suffering? Why am I not sharing in the fellowship of his sufferings? Why am I not becoming like him in his death?

I fear I am living in an age of disciples who are nowhere near the Cross, and I fear I am one of them. This is the gap of my great discontent. You with me?

The best news. All those people mocking him to “come down from the Cross” that day had no idea that he would rise up from the dead. Wow! Just wow.

Father, “I want to know Christ—yes, to know the power of his resurrection and participation in his sufferings, becoming like him in his death, and so, somehow, attaining to the resurrection from the dead.” (Philippians 3:10-11) Come Holy Spirit, and make me painfully aware of my distance from the Cross and give me the courage and the faith to wake up and move toward it. In Jesus name, Amen. 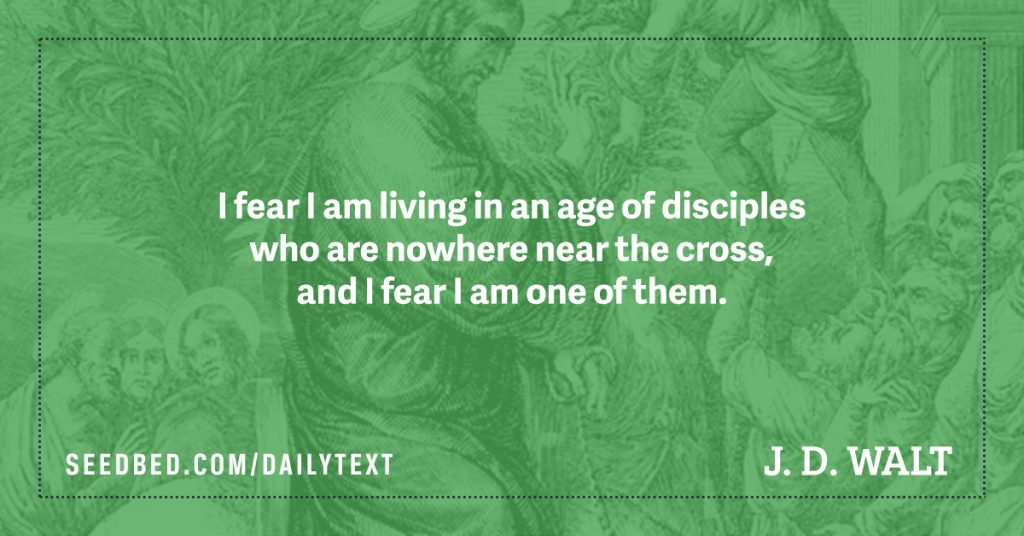 1. Let’s ask the question of the old African American Spiritual. “Were you there when they crucified my Lord?”

2. What do you think– could we be living in an age of the church– an age of disciples, who are nowhere near the Cross; who are absent from the scene?