Will You Do Me a Favor? It's Probably Not What You're Thinking Though
close
Menu 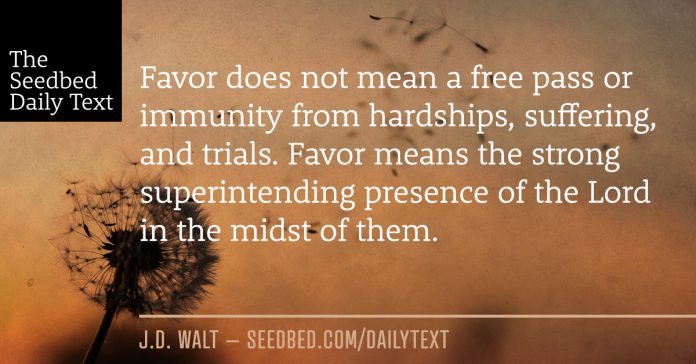 When daylight came, they did not recognize the land, but they saw a bay with a sandy beach, where they decided to run the ship aground if they could. Cutting loose the anchors, they left them in the sea and at the same time untied the ropes that held the rudders. Then they hoisted the foresail to the wind and made for the beach. But the ship struck a sandbar and ran aground. The bow stuck fast and would not move, and the stern was broken to pieces by the pounding of the surf.The soldiers planned to kill the prisoners to prevent any of them from swimming away and escaping. But the centurion wanted to spare Paul’s life and kept them from carrying out their plan. He ordered those who could swim to jump overboard first and get to land. The rest were to get there on planks or on other pieces of the ship. In this way everyone reached land safely.

As we wrap up this shipwreck story a powerful word comes to my mind. I think all Paul has been through can be wrapped up into one powerful Bible word.

The word is favor. I see Psalm 5:12 powerfully at work in Paul’s life.

“For you bless the righteous, O LORD; you cover him with favor as with a shield.” (Psalm 5:12)

Isn’t this exactly what the text describes today? The soldiers planned to kill the prisoners to prevent any of them from swimming away and escaping. But the centurion wanted to spare Paul’s life and kept them from carrying out their plan.

Over and over and over again, the Holy Spirit continually gave Paul favor. Favor does not mean a free pass or immunity from hardships, suffering, and trials. Favor means the strong superintending presence of the Lord in the midst of them. Think back through the story of Scripture and behold all the places where the favor of the Lord rises up. God favored Noah in the calling to build an Ark. God favored Abraham and Sarah in their old age with the promise of a child. God favored Moses to be saved from genocide, to grow up in Pharaoh’s palace and to later lead God’s people to freedom. On we could go to Deborah and Daniel and David and Hannah.

Favor looks like Stephen’s vision of Jesus standing at the right hand of God in the midst of his execution. Favor opens prison doors. Favor is being lowered in a basket over the city wall by cover of darkness. Favor comes in the form of a Roman Centurion. The reason Paul, the prisoner, emerged as the de facto leader of the ship? God favored him.

Then there’s the favor of all favor. The Angel Gabriel put it best in the way he greeted the young teenager, Mary, “Greetings, you who are highly favored! The Lord is with you.” (Luke 1:28.)

Favor is like money in the Kingdom of God. When Jesus said, “Seek first the Kingdom of God and his righteousness, and all these things will be added to you,” he was talking about favor. God shows his favor to all who seek his Kingdom. The question is will we have the eyes to perceive it?

I commend this practice to you. Write out Psalm 5:12 on a card and put it where you will see it every day.

Just after the word “bless” and before “the” insert the names of your children or grandchildren or your parents or friends or pastor or (me!) or anyone you know who is seeking to do the will of God. And don’t forget to pray it for yourself.

Can you remember a time in your life when you were favored by God? Tell that story today.