Will Jesus Pay My Taxes?

24 After Jesus and his disciples arrived in Capernaum, the collectors of the two-drachma temple tax came to Peter and asked, “Doesn’t your teacher pay the temple tax?”

When Peter came into the house, Jesus was the first to speak. “What do you think, Simon?” he asked. “From whom do the kings of the earth collect duty and taxes—from their own children or from others?”

“Then the children are exempt,” Jesus said to him. 27 “But so that we may not cause offense, go to the lake and throw out your line. Take the first fish you catch; open its mouth and you will find a four-drachma coin. Take it and give it to them for my tax and yours.”

Because this is a curiously puzzling text, I am going to attempt a series of observations with the help of my tutor, Craig Keener, and let you do what you will with them.

Any King who pays the taxes of his subjects is an extraordinary King. In fact, no King does it—not even Jesus. Why doesn’t Jesus do this? Because Jesus doesn’t have subjects. Jesus actually adopts his subjects as his children. And because they are his children they are exempted from the tax. Here’ the twist. Jesus does not waive the tax. He still pays the tax on their behalf.

So what are we to make of all of this? Here’s my own take on it. It sounds strangely similar to what is about to unfold in Jerusalem on Good Friday. The King will go to the cross to pay his children’s tax debt—the insurmountable debt of sin—only he will pay the debt once and for all with his very life.

As we press on through the text we will read more stories about Kings and servants and children and debts that will further shed light on the message of the Cross.

So, yes, Jesus will pay your taxes—not to the IRS—but before the High Court of Heaven, where it matters most.

King Jesus, how can we begin to thank you for what you have done for us. Because I can never pay you back, I want to offer you myself. I know most kings would pay my debt only to take me as their slave. You actually free me from the slavery of sins debt by making me a son/daughter. That’s why I want to serve you for the rest of my days. Yes, Lord, let my gratitude be expressed through my joyfully taking up my cross and following you. I pray this in the name of Jesus, the one who is my salvation. Amen. 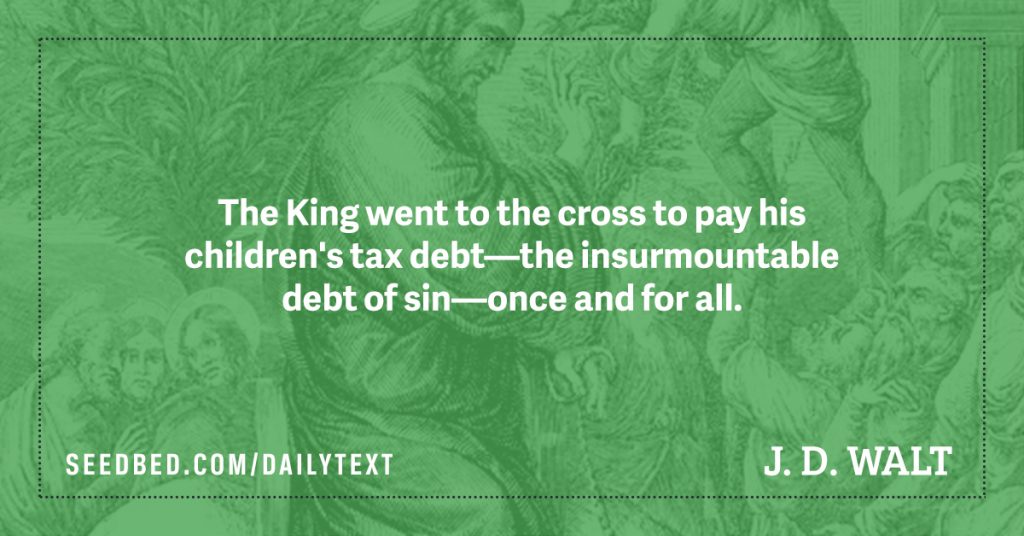 1. Do you have more of an idea of what this mysterious story might have meant at the time it happened? How about what it might mean for now?

3. Have you considered that we are now following one king or another. We are living under the reign of another leader. Wouldn’t you rather that be King Jesus? While we are graced to make the choice, there’s not any real choice there is it?

Will Jesus Pay My Taxes?