Will There Be Baptismal Certificates In Hell? - Seedbed
close
Menu

18 Early in the morning, as Jesus was on his way back to the city, he was hungry.19 Seeing a fig tree by the road, he went up to it but found nothing on it except leaves. Then he said to it, “May you never bear fruit again!” Immediately the tree withered.

20 When the disciples saw this, they were amazed. “How did the fig tree wither so quickly?” they asked.

21 Jesus replied, “Truly I tell you, if you have faith and do not doubt, not only can you do what was done to the fig tree, but also you can say to this mountain, ‘Go, throw yourself into the sea,’ and it will be done. 22 If you believe, you will receive whatever you ask for in prayer.”

23 Jesus entered the temple courts, and, while he was teaching, the chief priests and the elders of the people came to him. “By what authority are you doing these things?” they asked. “And who gave you this authority?”

24 Jesus replied, “I will also ask you one question. If you answer me, I will tell you by what authority I am doing these things. 25 John’s baptism—where did it come from? Was it from heaven, or of human origin?”

They discussed it among themselves and said, “If we say, ‘From heaven,’ he will ask, ‘Then why didn’t you believe him?’ 26 But if we say, ‘Of human origin’—we are afraid of the people, for they all hold that John was a prophet.”

Then he said, “Neither will I tell you by what authority I am doing these things.

In my early days as a volunteer youth minister (and a full time law student) I decided to take my kids up the street to a “Youth Revival” at the First Baptist Church. The guest preacher chose this text about the fig tree. He was loud. The kids I brought, not to mention myself, had never experienced anything quite like what happened there that night.

The evangelist proceeded to speak about the leaves of false faithfulness, of so many of us who did religious things for appearance’s sake, who pretended to be Christians but were far from it. He said Jesus would search us for fruit and all he would find were leaves. Leaves without fruit mean less than nothing, because rather than protecting growing fruit they hide growing hypocrisy. Fruit would be the life of faith in Jesus; a life lived to the glory of God.

And did I mention this guy was loud? Honestly, I was offended by his tactics, yet when I looked down the row at the teenagers who accompanied me in the packed church, they were riveted to this speaker. He was not telling funny stories or inspiring stories or anything of the sort. Finally, as he approached the end of his talk he drew back his bow and launched this fire tipped arrow into the crowd. He said, “I’m going to tell you the hard truth tonight. A lot of you all sitting in this auditorium tonight are going to split Hell wide in two with a baptismal certificate clutched in your hand. We all sat in stunned silence as he began the stirring invitation to repent and believe. The proverbial boom had been lowered.

There we sat like so many leafy green fig trees, hiding our fruitlessness, and withering under this scathing word of judgment. “This guy would have been taken to the edge of the cliff by our church,” I thought to myself. As he gave the “heads down eyes closed nobody looking” invitation to be a real Christian, I looked. Every kid I brought immediately lifted their hands high. Within seconds they were all leaving their seats and heading to the altar. And there I came right behind them, crying tears of repentance for my judgment of this man of God who had brought such a hard word of mercy to us all that night.

This withering of the fig tree was Jesus’ only reported “judgment” miracle. He did it with the Temple just over his shoulder in the distance. He was saying something to the effect that many who had given themselves to the corruption of the system the Temple had become would one day “split hell wide in two” with their Abrahamic birth certificate in their hands.

False faithfulness to religious duties will ultimately prove fruitless. Going through the motions of the forms and formalisms of faith will not matter. Jesus is looking for the fruit of real faith—anchored in his reality and righteousness. This kind of faith, be it ever small, moves mountains.

I will never forget those early days of my ministry and that night down the street at the First Baptist Church. Those kids won’t either.

Father, forgive me for the ways I tend to judge people who bring hard and harsh words of judgment concerning your salvation—when you yourself did not shy away from speaking such words when needed. Father, let us realize that every word of judgment on this side of The Judgment is actually a word of mercy. It’s a word that reminds us there’s still time to turn completely to you. We don’t want to reach the end and realize we only have the foliage of faithfulness without the fruit of it. Come Holy Spirit and stir the offense of mercy deep into our souls. Expose our offense and lead us in the way of mountain moving faith. In Jesus name, Amen. 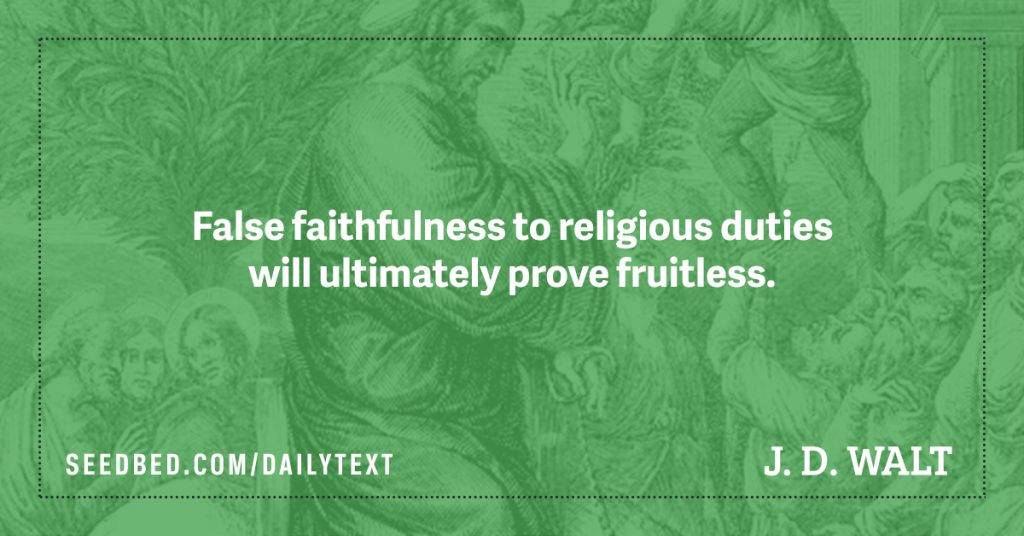 1. How would you have responded that night had you been with me at the First Baptist Church Youth Revival?

2. How about you? More leaves or more fruit? Reflect on the difference.

3. Do you see the difference between putting faith in our own faithfulness rather than in Jesus himself? Reflect on that.